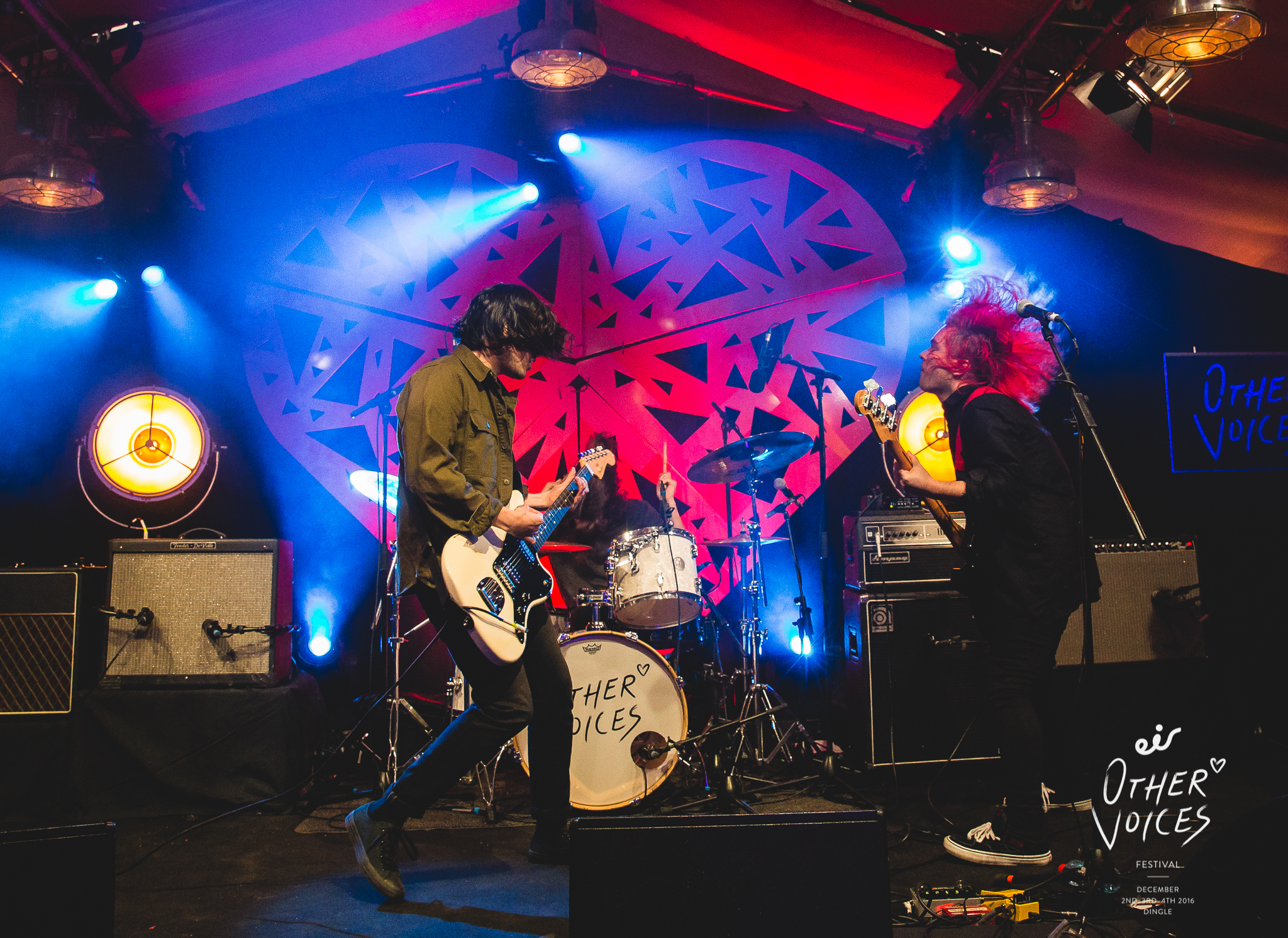 "Last year was intense and this year is looking a little bigger so, we just need to stay alive now and not implode".

Fangclub are a band that stands alone in Ireland right now. Purveyors of power-chord riffs, throat shredding vocals and hook-filled tunes that bring to mind Nirvana and early Green Day, the Dublin trio have quickly established themselves as a force to be reckoned with. Having first joined us at Electric Picnic in September, the band came to Dingle to rock the Other Room. Ahead of their apperance on the IMRO Other Room Special this Thursday 9 March at 23.30 on RTÉ 2, Fangclub tell us about school days, New York excursions and plans for the future.

For those that don’t know how did Fangclub begin?

I had been writing and recording myself without a band but always dreamt of being in a rock band. Then I met Kevin in school. He was easy to pick out in the crowd. An obvious punk rocker. We started a band and played everywhere we could until our drummer left. Then we met Dara at a house party. We'd seen him play in other bands before so knew he would fit. Jammed once and then knew this was Fangclub.

What music did you bond over initially?

Initially it was The Offspring, Nofx and The Distillers with me and Kev. Then Nirvana, Weezer, The Vines, Nine Black Alps and Foo Fighters were the heavy hitters with us all.

I heard you wrote the songs for this band after quitting “a dead-end job” and moving to New York for a month? It sounds like a bold life decision, tell us more about that experience?

I had saved all the money I was making from that job and went for it. I was pretty stuck at the time. The band wasn't happening. I really needed to spark something like a paradigm shift. I stayed in East Village for a month and saw so many indie artists doing what they do. It really inspired me to take control of every aspect of the work. I wrote a tonne of songs over there too. Right place right time for my mind or something.

What else has inspired your songs?

What can you tell us about recording your first songs in Kerry?

It was the game changer for us. We rehearsed loads of songs and just wanted to record it all for ourselves. There was no agenda or plan. It really was just escapism. We all needed to get away from our lives at that time. So we ended up in Kerry with our friend and producer Tadhg Healy. We recorded everyday and lived in a house attached to the studio. We had little to no money so were living out of each others pockets. It was the best experience I've ever had. Zero pressure, just playing and making things up everyday.

Was playing Other Voices you first time back to this part of Ireland? Did you get to see any other acts over the weekend?

We always play Mike The Pies in Listowel too. It's become a special place for us and a lot of bands. There's something about it, not to mention the people are incredible. Other Voices was class. We had a lot of fun. We got to see Girl Band, Lisa Hannigan, Brass Phantoms, Thumper and Cry Monster Cry were a highlight.

You recorded an album of material yourselves before signing a deal - did you have a plan B before Universal discovered your music?

We didn't even really have plan A. We thought maybe we could print up some records and tour DIY as per usual. We got approached by some indie labels in Japan too but we really didn't think much past being in that studio.

For people who’ve never seen Fangclub, what can they expect?

Energy. Jumping around. Escapism. A huge rock show in a tiny club.

What’s planned for the future?

We have some shows and tours to announce for the year. We have some singles and videos coming out and the album is dropping in August. Last year was intense and this year is looking a little bigger so, we just need to stay alive now and not implode.