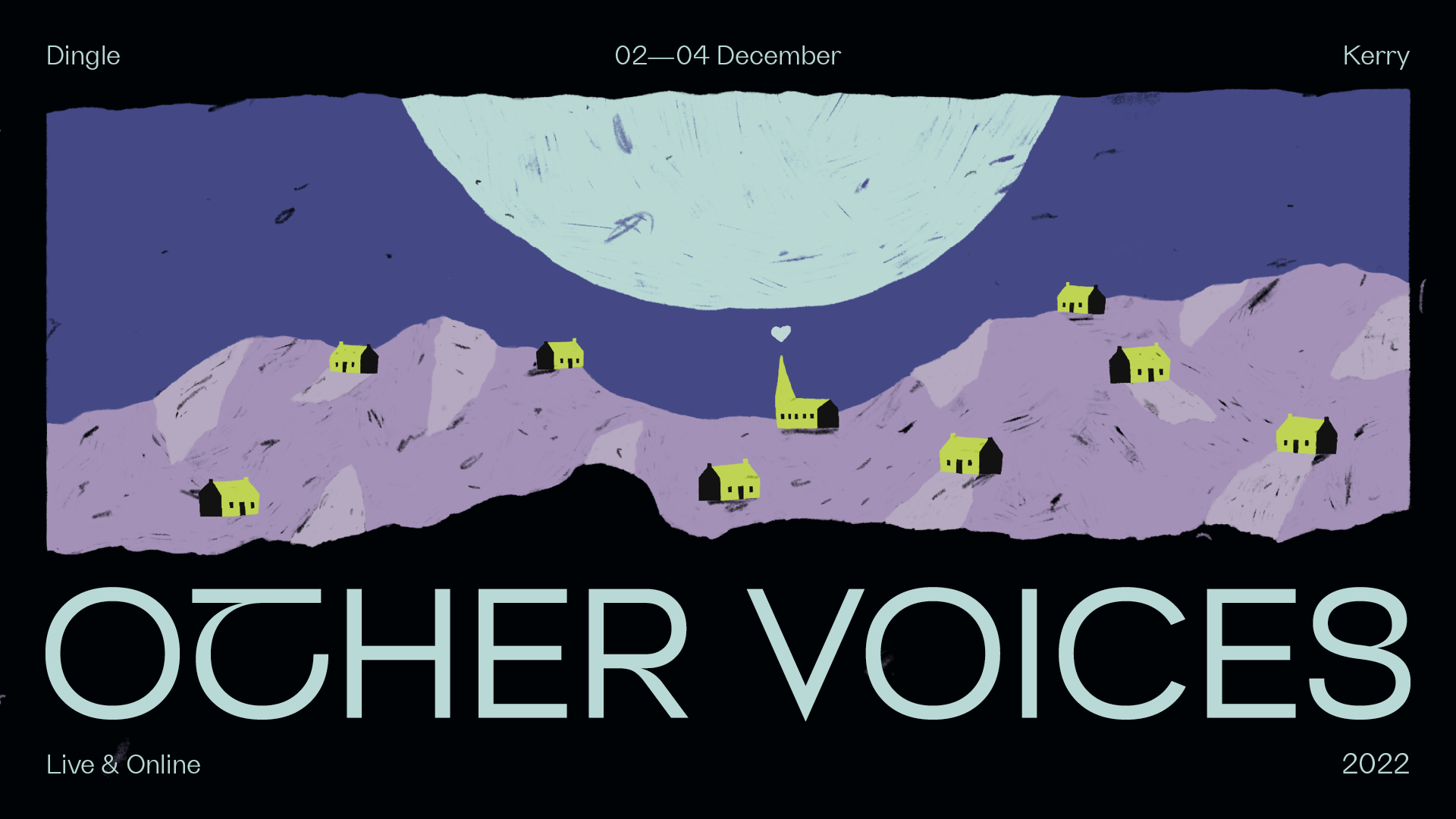 As we count down the days until we welcome you all to Dingle to celebrate our 21st birthday, we’ve put together a beginner's guide for anyone joining us for the first time!

But whether this is your first time at OV or your twenty-first, we recommend experiencing everything Other Voices Dingle has to offer from music to discussions to art and beyond!

What is Other Voices?

Other Voices is part-festival, part-television series, part-musical pilgrimage which takes place in the beautiful town of Dingle in West Kerry each Winter.

For two decades, artists including Amy Winehouse, Sam Fender, Little Simz, Arlo Parks, Hozier, Fontaines D.C. and countless others have made their way to Dingle to play intimate sets across the town as part of the festival.

Other Voices as a music festival is formed by six distinct strands which each offer unique experiences across the weekend:

1. The Church of James

What is the Church of St James?

The Church of St James is Other Voices' spiritual home right in the heart of Dingle. It's the Other Voices' ‘main stage’ if you will. It’s a teeny, tiny 80 capacity room where for almost 21 years, some of the world’s best musicians have come to raise their voice and sing and this year will be no exception.

Who is playing the Church?

How do I get tickets?

Tickets for The Church cannot be bought - they are only available via online competitions which you will hear about soon. Follow us on socials for the latest on how to nab some golden tickets.

Where can I watch them if I can’t get tickets?

These performances will be streamed live on the Other Voices YouTube and available to watch on the big screen some of Dingle’s best spots. Watching artists like Sigrid, Young Fathers or The National in Benner’s Hotel has become a right of passage as part of the Other Voices' experience. Performances from The Church will also be included in Other Voices Series 21 which will air on RTÉ in Spring 2023.

When & where do the Church concerts take place?

The Church of St James is located right in the middle of town. They will take place each night across the weekend (Friday - Sunday) from 7pm - 10pm. The full line up and schedule will be released soon.

What is the Dingle Gin Music Trail?

The Dingle Gin Music Trail is heartbeat of the weekend - a showcase of over 40 of the best established and emerging Irish talent on the scene with over 80 Music Trail shows taking place in some of Dingle’s best venues.

SPRINTS, Niamh Regan, THUMPER, Junior Brother, Gurriers and looooads more. Although the majority of this year’s line up has already been announced we still have a few more surprises in store which we’ll share in the coming weeks. You can see the full line up here.

Where will the performances take place?

How do I get tickets?

Tickets for the Dingle Gin Music Trail are now sold out but you can join the waiting list on Eventbrite here. If bought tickets but can no longer join us you can submit a refund request via Eventbrite now.

Where can I collect my wristband?

You will be able to collect your wristband from the Hub when you arrive in Dingle. We'll be sharing the location of the hub next week.

Will the Dingle Gin Music Trail shows be livestreamed?

No, these gigs will happen live in the moment so if there is a band you want to see make sure you get down to the venues early as entry is on a first-come, first-served basis. This year most acts will play twice so you have twice as many chances to see your favourite bands live in Dingle.

When do the Dingle Gin Music Trail gigs take place?

The Dingle Gin Music Trail shows will kick off at 10pm on Friday night and run until about 2am.

On Saturday and Sunday they will start at 1pm and run into the wee hours. The full schedule and venue map will be released soon.

What is Ireland’s Edge?

Ireland’s Edge is Other Voices’ conversation and ideas stand which provides a unique space during the weekend’s festivities for curious minds to connect, share ideas and explore new perspectives. This year’s theme will explore culture, power, representation, art, innovation and more.

Ireland's Edge happenings are the perfect way to start your day at Other Voices, with inspiring daytime live performances & discussions which will ease us into the magic of the Dingle Gin Music Trail each evening.

When and where does Ireland’s Edge take place?

Daytime performances and discussions will take place on Friday 2 December and Saturday 3 December the weekend in the Skellig Hotel, just 1km from the centre of Dingle.

Who is speaking and performing at Ireland’s Edge this year?

Can I buy tickets for Ireland’s Edge?

Yes! Earlybirds have just sold out but there are both weekend and day tickets are available here.

Can I attend Ireland’s Edge with a Dingle Gin Music Trail wristband?

No. Due to the intimate nature of these discussions and performances Ireland’s Edge is ticketed separately to the Dingle Gin Music Trail.

Can I only attend the sessions I’m interested in?

You can, but we really recommend you stay for the day and soak up everything that Ireland’s Edge has to offer. It’s a place where creative sparks have been known to fly and like minded people come together.

2 - 4 December | An Díseart & along the Dingle Gin Music Trail

Curated by the brilliant Dingle creative Áine Ní Chíobháin, Cogar is Other Voices’ Irish language strand which has been a vital part of the Other Voices festival for the past three years. It is a micro-festival for the senses celebrating the arts and our native tongue. This year Cogar will present a series of events, art and live performances across the weekend.

When and where does Cogar take place?

Cogar installations and events will take place in the sensory gardens at An Díseart in the heart of the town and with a number of performances also taking place along the Music Trail.

Who will perform as part of Cogar?

Do I need a Dingle Gin Music Trail wristband to attend the Cogar events?

You do not need a wristband to enjoy the Cogar happenings at An Díseart but you do for any of the Dingle Gin Music Trail performances.

Banter is an ongoing series of public interviews, conversations and discussions which take place in big and small rooms throughout Ireland, Europe and the United States. Banter has been part of the furniture at Other Voices since 2012 and our dozens of guests have joined us out the back of Foxy John’s in downtown Dingle to tell stories about this, that and the other. The interviews are hosted by Jim Carroll and Banter Other Voices is produced by Molly King. Yes folks, it really is a Carroll King Production. Previous Banter guests have included world-class photographer Rich Gilligan, writer Sinead Gleeson, multi award winning playwright Enda Walsh among many more.

When and where does Banter take place?

Banter will run from 2pm - 6pm on both Saturday and Sunday in the wonderful Foxy John’s bar.

Who will be speaking at Banter this year?

Can I attend Banter with a Dingle Gin Music Trail wristband?

Yes! Entry to Banter is open to all Music Trail wristband holders across the weekend. Access is extremely limited so we recommend getting down nice and early and settling in for the afternoon with pals before you hit the Music Trail.

6. The IMRO Other Room

What is the IMRO Other Room?

IMRO Other Room is a series of trailblazing sets by sone of Ireland's brightest new voices. These performances performances will be recorded in the Hillgrove and included in the Other Voices Dingle livestream which will be available via YouTube and also shown in bars around Dingle across the weekend.

Who is playing the IMRO Other Room?

Can I attend IMRO Other Room?

No! These livestream only performances with no audience.

Where can I watch them if I can’t attend?

Yes! All IMRO Other Room performances will be streamed live via the Other Voices YouTube and on the big screen in some of Dingle’s most beloved venues across the weekend. Streaming venues will be announced in the coming weeks.

When can I watch them?

There are still more surprises to be announced for this year's Other Voices - you can keep up to date on all the latest news by following us on socials.

We're on the lookout for some amazing people to join the #OV21 volunteer crew!

You can apply to be on the team here: https://bit.ly/3XdF1eY