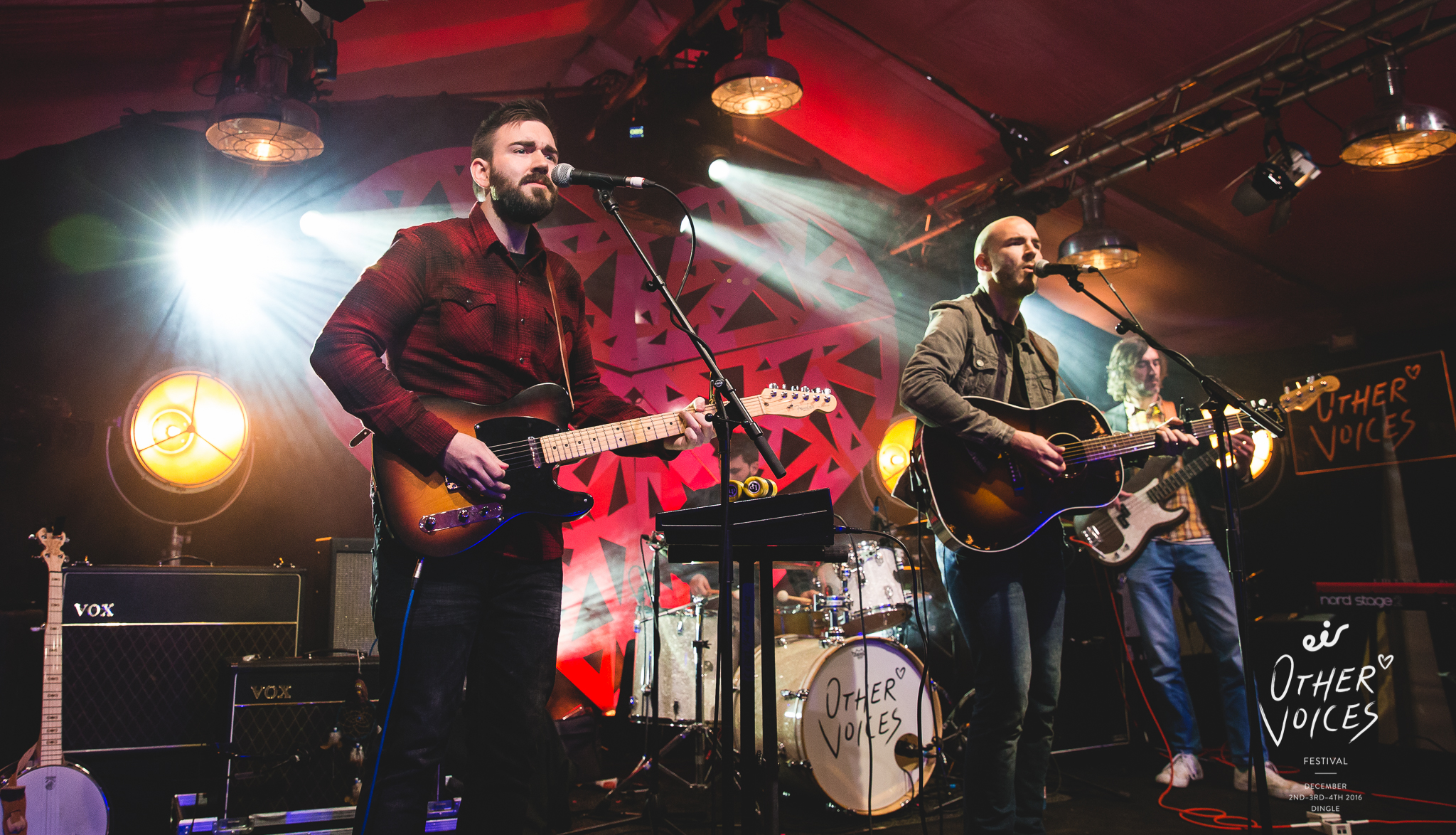 "Sometimes it feels that there is so much negativity in the world, it is good to take a stand against it and do something that benefits people."

Cry Monster Cry is the brainchild of brothers Jamie and Richie Martin from Sutton, Co. Dublin. The duo are known for their peerless harmonies and crafted songwriting, best exemplified on the debut album 'Rhythm Of Dawn'. A welcome addition to the IMRO Other Room, you can see Cry Monster Cry on Other Voices this Thursday 9th March on RTÉ 2 at 23.25, repeated Sunday 12th March at 00.35. Ahead of this, Jamie and Richie spoke to the OV team about literary influence, sibling communication and resisting negativity.

How was Dingle? Did you get to see any other acts over the weekend?

Dingle was a fantastic experience. We got to see some really talented bands and artists, some of which we had seen before and some new ones. Fangclub and Moon Looks On were in the Other Room and were fantastic and exciting. Lisa Hannigan and Imelda May were mesmerising as ever.

For anyone who’s never seen Cry Monster Cry live, what can they expect?

Close fraternal harmonies and what we would hope is considered songwriting. Our shows can sometimes be just as a two piece and stripped back or with a full band where we like to showcase dynamic instrumentation. We concentrate on what we feel creates a captivating song, melody, rhythm, harmony...along with capturing a certain mood and bringing a unique energy to the stage.

Being brothers do harmonies and songs come together quite instinctively?

It definitely helps. Our voices are quite similar and we have the same range, so we can weave in and out of lines. Writing the harmonies and making them sit together seems to work in an instinctive manner and we often go down the same route in the song writing process.

Can you communicate in a quicker way, and read each other’s mood quite easily?

I think so. Quite often we are on the same page musically. Sometimes we are not, and that just brings the benefit of another direction to approach something from. When it comes to writing about experiences or capturing a certain mood in a song, being brothers who are close and share a history definitely helps speed that along. It is rare that one of us has to explain what we are going for to the other.

As I understand it you grew up with lots of diverse music at home, has that influenced your approach to songs for Cry Monster Cry?

It definitely has. When we were very young children we were singing along to everything like Frank Sinatra, Bob Marley, the Everly Brothers and Willie Nelson. Different genres were always there and we both can recall loving songs for different reasons, whether it is for instrumentation, storytelling or a certain lyrical style. These things all plant seeds that grow later on.

Yes they have. The song from our very first EP “The Fallen” takes inspiration from John Milton’s, “Paradise Lost”. There are influences from authors, novels, poetry and fables throughout our writing. As well as that, I feel that the act of reading and studying the written word helps the process of songwriting. It’s like keeping fit in the gym, reading and writing helps keep the muscles fresh when it comes to sitting down and trying to say something.

You’ve been gigging around Ireland for a number of years now, what important lessons have you learned along the way?

I think that we have learned a lot in our time performing live. You learn what works for you as an artist or band personally. Everyone is unique and brings something of themselves to a show, it’s a matter of honing in on that and making the experience memorable. We have both learned to relax on stage more and try to enjoy the moment we are in, as well as finding the venues and audiences that fit what we do.

You’re playing a string of show in Whelan’s in aid of Aware, how did that come about? Why is this particular charity important to you?

We are playing three shows in Whelan’s, March 24th, 25th and 26th. The first two sold out quite quickly and we thought that it would be a good idea to do something different with our third night. Sometimes it feels that there is so much negativity in the world, it is good to take a stand against it and do something that benefits people. Aware is very important to us and reflects struggles that we have had ourselves in the past. We took part in a night last year called Warriors of the Light, organised by Dublin footballer Kevin McManamon and his friend Mark Swaine in aid of Aware. The night was extremely special and had a selection of guest speakers standing up and bravely talking about their own experiences with depression as well as opening up the floor to the audience. By the end of the night there was a unique feeling in the room of support and understanding.

There’s lots planned. We had a new single called, “Things We Can’t Take Back” coming out soon and we have been busy writing new material that we are very excited about releasing in the coming months. We have gigs booked across Ireland to showcase the new material, including our own shows and some support slots with artists we admire.