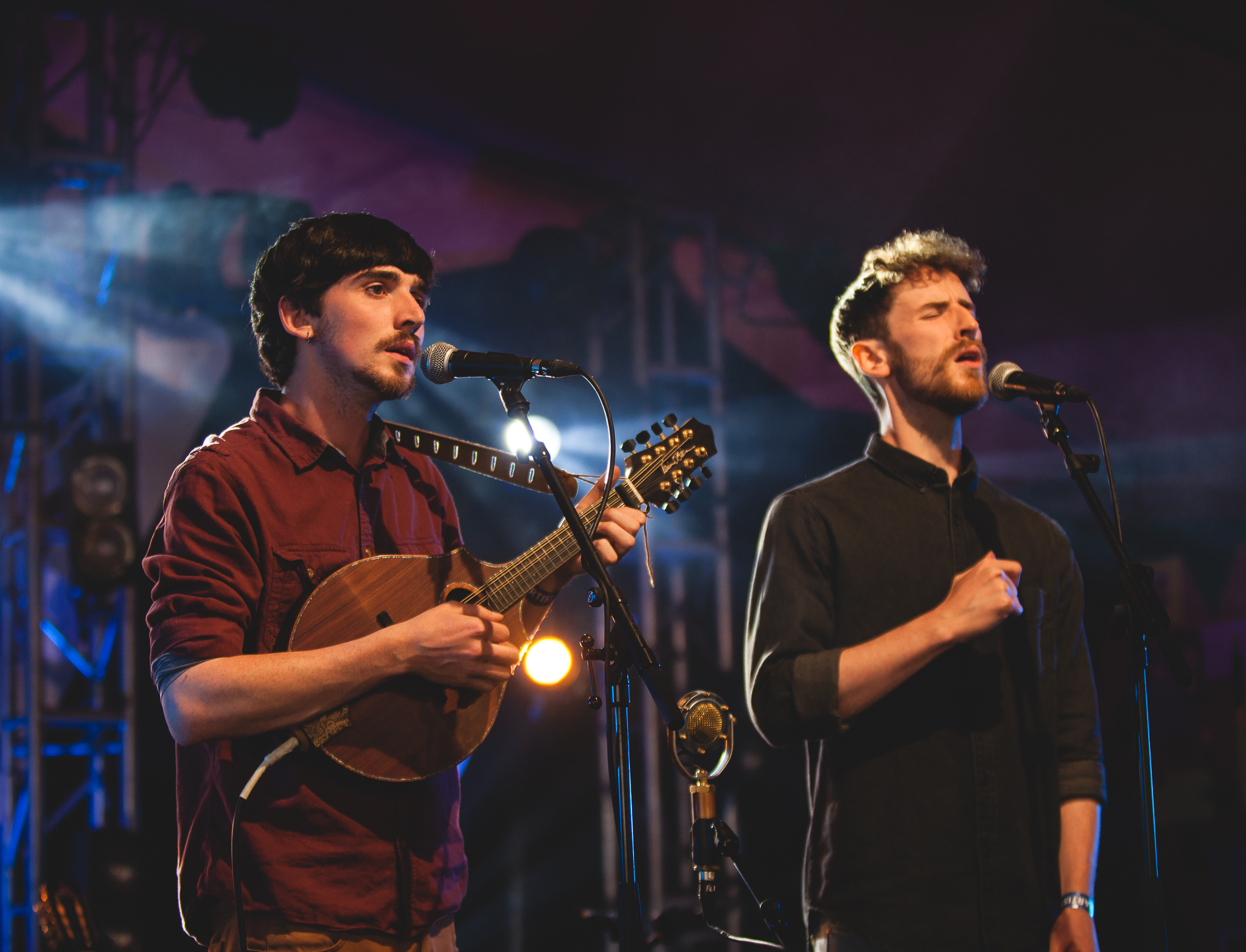 Ye Vagabonds are brothers, Brían and Diarmuid Mac Gloinn. They began playing music together on the streets of their hometown Carlow and forged a style based on close harmonies and acoustic instrumentation inspired by various folk traditions. Seven years ago they moved to Dublin and quickly became familiar faces around the city’s folk session scene.

Earlier in the year we released 'Other Voices Presents: Ye Vagabonds', a beautiful collection of songs recorded at the Orchard Sessions in September 2018, since then, Ye Vagabonds' magnificent second record 'The Hare's Lament' emerged and was met with critical acclaim. 'The Hare's Lament' is an LP of traditional songs learned from some of the greats of Irish music; from precious archive recordings of a grandfather they never met; from the unique collection of singer Róise na nAmhrán from Arranmore Island in Donegal (their mother’s birthplace) and from contemporaries in the singing communities around Dublin, of which Ye Vagabonds are a valued part. The brothers recently won Best Album, Best Folk Track and Best Folk Group at the RTÉ Radio 1 Folk Awards and also won Best Traditional Track at the BBC Radio 2 Folk Awards.

We can't wait to share Ye Vagabonds' performance in St. James' Church with you. It will air on Thursday 30th of April, on RTÉ 2 and RTÉ Player. Ahead of this episode, Brían and Diarmuid Mac Gloinn talked us through some of the music they're listening to at the moment and where they discovered it. Perfect listening for these times. Enjoy the tunes and read about their selections below.

Paraguayan Agustín Barrios (1885 - 1944) is one of the greatest classical guitar composers who ever lived and this is considered to be his finest composition. It’s especially cool that you can hear the composer playing his own work. Barrios was a really interesting character. He was a polymath and a poet. He was part Guarani and romanticised his own indigenous origin often performing in part traditional dress under the pseudonym Nitsunga Mangoré, an anagram of his first name followed by the name of a Timbú chief (or cacique). His music and poetry was both romantic and religiously inspired. We’ve both been interested in classical guitar since we were teenagers. Barrios is a favourite.

The Pipe On The Hob

Sweeney’s Men - The Pipe On The Hob

These guys arrived into our consciousness at a pivotal point in our musical development. The mixture of Irish, English, American and psychedelic elements made them the perfect gateway into the deeps of traditional music and song. When we started playing music together our roadmap was traced over the 'Tracks of Sweeney'.

Diarmuid’s partner Thawab introduced us to this album of Sana Moussa’s arrangements of Palestinian folk songs. We listened to it first on one of our many car journeys around Ireland. If you check it out on YouTube you’ll find explanations of the songs. Prepare yourself for some heartbreak as well as some serious beauty. Rummanak is a love song sung by women from Nazareth and neighboring villages.

Six years ago we befriended Ron Kane, an old time fiddle player from Montana. Over many’s a happy evening in our living rooms in North Dublin Ron shared with Brían a wealth of American fiddle tunes and instructed Diarmuid on the basics of backup guitar. He inculcated in us a love of American old time music and spun many’s a lengthy yarn. W. M. Stepp was one of Ron’s recommendations. His unique playing, although very distinctively American, also reminds us of Scottish and of Sliabh Luachra fiddle style.

The Ceanabhain clan are a musical family of the first magnitude. They all seem to play a wide range of instruments and sing beautifully in several languages. This is a rare example of a song that Saileog has chosen to accompany on piano. The effect is spellbinding. The song is an interesting mix of drunken boast and heartsore regret. This version is influenced by the singing of Colm O Caoidheáin.

We first heard tracks of this piano player in Myles O'Reilly’s living room a few years back. She was classically trained in Western music and studied Ethiopian sacred chants too. Her music is sometimes called jazz and is considered distinctly Ethiopian but, probably like the woman herself, it’s quite unique. She was from an upper class family and used her privilege to fight for gender equality. She was the first woman to work in the Ethiopian civil service or to sing in an Ethiopian Orthodox church. She knew and sang for emperor Haile Salassie in the 1930s. At 19 she became a nun and has always used her music to help the less fortunate. Basically she’s an absolute hero.

This is one of the many beautiful tracks Victor Jara made with the Chilean folk group Quilapayun. After a day spent wandering around Paris wearing brightly coloured dresses for the women’s carnival, Diarmuid and his friend Daniel ended up in a bar where their striking appearance was noticed by Hector, a middle aged Chilean man who was curious to know what exactly they were. Diarmuid explained about the carnival and that they were folk musicians. They started to talk about Chilean folk music and, when Diarmuid mentioned Victor Jara, Hector began to weep. Victor Jara had been his music teacher he said. Jara was an educator, poet, theatre practitioner and protest singer who was tortured and killed during the dictatorship of Augusto Pinochet. He’s fondly remembered by people in Chile and beyond as an artist and human rights advocate. May he rest in power.

One of us discovered Romica Puceanu’s singing a couple of years ago while doing some searching online for Romanian music. She started singing at cafés when she was 14 years old and became one of the best known Lautani singers of her time, backed by her cousins the famous Gore brothers. She never learned to read or write but was supposed to have had an endless repertoire of Lautani songs. She was meant to have been really funny and would always arrive to recording sessions with a teapot full of cognac. We love this track in particular although we have no idea what it’s about.

Whitey on the Moon

Gil Scott-Heron - Whitey on the Moon

It’s a folk singers job to comfort disturbed people and disturb comfortable people. Woodie Guthrie said that. Gil Scott-Heron nails it in this one. Whitey on the Moon talks about black people living in poverty while the same society spends collosal amounts of money sending three white people to the moon. Whitey on the Moon is about more than moon missions. It’s about a privileged class being out of touch with what’s happening on the ground, out of touch with reality. Its witty and at the same time serious and caustic.

We could have chosen any of a number of tracks from the album 'The Power of the True Love Knot'. Interesting very baroque arrangements of organ and cello give this album a really rich and kind of fantastical atmosphere.

Ye Vagabonds will play St. James' Church this Friday 29th of December and be included in the 18th series of Other Voices, which will air in 2020.