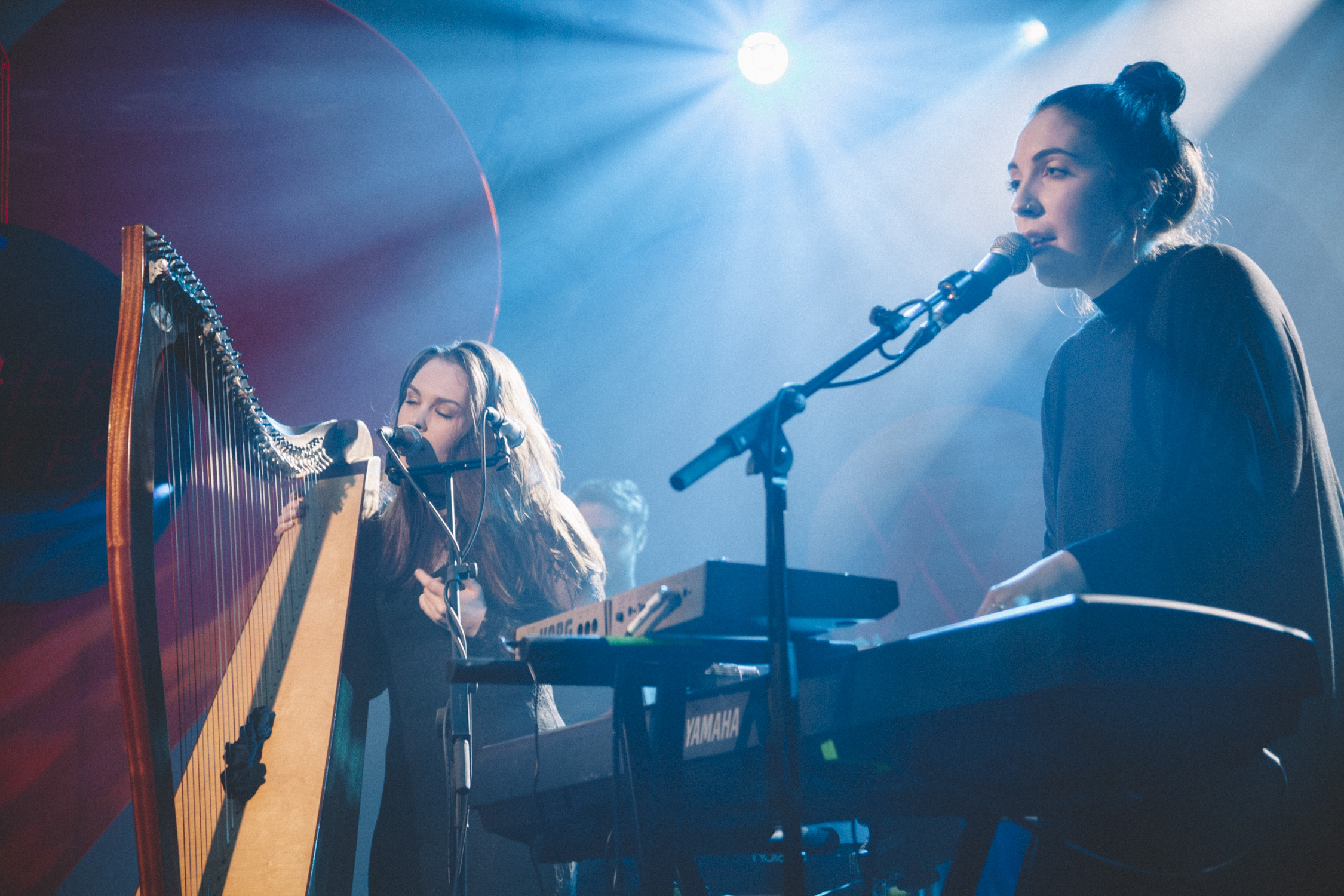 From their earliest gigs, it was clear Saint Sister were doing something different. Blending celtic folk traditons with ambient aesthetics, poetic lyricism and minimalist R&B percussion, for want of definition the duo's sound was dubbed 'atmos-folk'. To give us a better insight on their musical DNA, Morgan MacIntyre and Gemma Doherty picked 10 tracks each for this Spotify playlist. Dipping into melodramatic 60s pop, modern classical composition and Laurel Canyon folk, it's an eclectic mix from the genre crossing duo.

Speaking of her selections, Morgan highlighted the Patsy Cline classic 'Crazy', as "the first song I ever remember listening to. I have a very vivd memory of sitting in my living room on a pink carpet, about 4 years old staring at the CD player and pressing the track-back button every time the song ended. I just wanted to hear it over and over again. I was mesmerised."

The maudlin charm of 60s girl-group The Shangri-Las, also conjures up childhood memories for Morgan - "The Shanrgi-Las remind me of my mum and sister. My mum used to sing all their songs to the two of us and we'd spend hours singing them together, acting out all the lyrics to pass long car journeys or rainy days."

For something more recent, Morgan highlights the songwriting skills of Angel Olsen's 2014 track 'Windows' - "I love Angel Olsen's songwriting and voice so much. She's a master at finding new and gorgeous ways to deliver old and commonly held sentiments. The lyrics and melody in this track do all kinds of things to me. They're just so perfectly simple and beautiful and painful. "Won't you open a window sometime? What's so wrong with the light?"

For Gemma, she celebrates her harp playing hero Catriona McKay and the track 'Isflak' - "I fell in love with Scottish harpist Caitriona McKay a few years, watching her was like a masterclass in contemporary traditional playing. 'Isflak' is a beautiful piece from White Nights, her album with fiddle player Chris Stout. Their playing is so versatile and virtuosic, it’s hard to believe there are only two instruments on the track at times."

Belfast singer-songwriter Katherina Phillipa has also made a strong impression on Gemma - "'Hosanna' from the Broken to be Rebuilt EP knocked me sideways the first time I heard it, which is something that doesn’t happen very often, and when it does that feeling really stays with you. Her production is so powerful and yet there’s a wonderful rawness to it, you can hear the noise of the organs pedals and stops on the track. It’s so beautiful."

The feeling of an immediate emotional connection with music, also prompted Gemma to pick John Adams 'Shaker Loops'. A four movement composition for strings, the piece was composed in 1978, and originally inspired by the ripple effect of bodies of water. Speaking of the track, Gemma says "the point in the first movement when the frenzy resolves briefly onto a shimmering Bb major was another goosebumps moment for me."

Gemma also highlights the Lisa Hannigan track 'Fall'. Saint Sister first met at Other Voices last December and subsequently opened for Lisa on her most recent European tour - "Fall' by Lisa Hannigan is my favourite track from her stunning new record, made all the more special by having the chance to sing it with her and her wonderful band when we supported them around Europe a few months ago."

1. Joni Mitchell - Case Of You

7. The Sundays - Here's Where The Story Ends

10. The Shangri-Las - Remember (Walking In The Sand)

13. Sufjan Stevens - Should Have Known Better

Don't miss Saint Sister when they join us at this year's Electric Picnic. You can watch their performance of 'Tin Man' in St. James Church below.