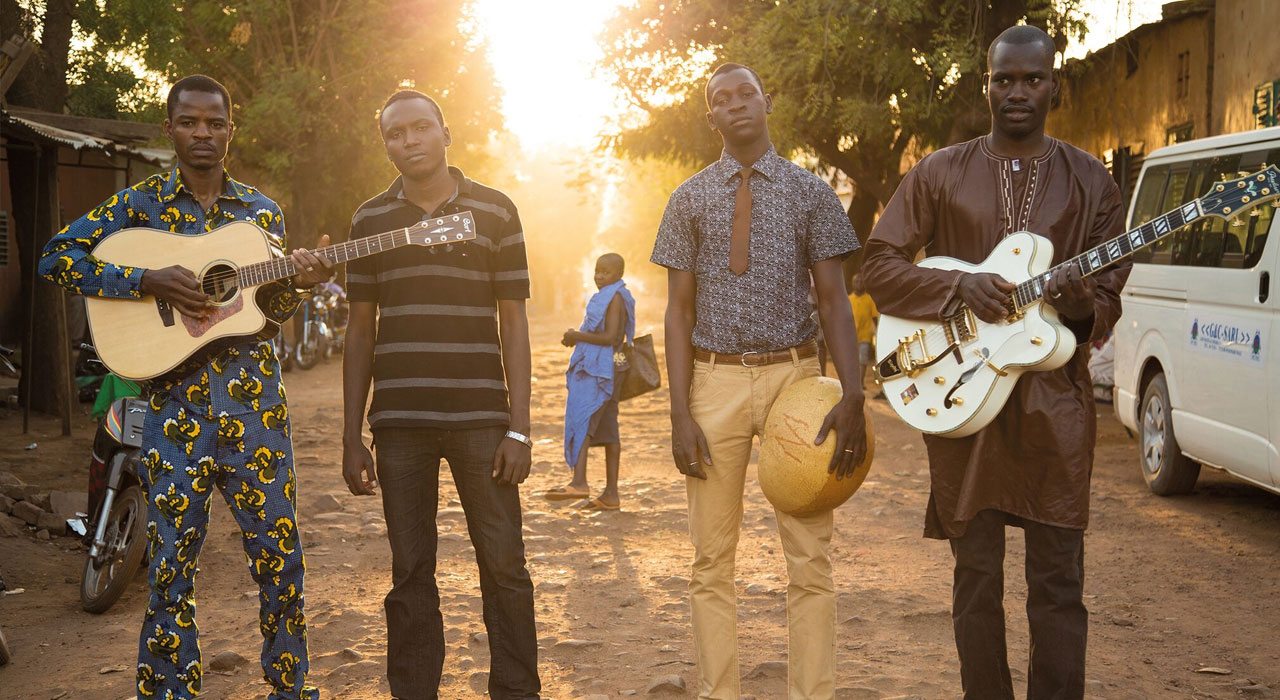 "I think our music is engaged rather than political...It's about starting a conversation"

Since releasing their debut album 'Music In Exile' in 2015, Songhoy Blues have toured the world, bringing their unique desert blues to a global audience. Originally hailing from Timbaktu in Northern Mali, the quartet were forced to move to southern Bambako due to civil conflict. It was here that they were discovered by Damon Albarn and brought to London to perform as part of his Africa Express project. The group then collaborated with Nick Zinner of Yeah Yeah Yeahs for their debut album, hailed for its unique fusion of African blues-rock, danceable rhythms and socially concious lyrics. Second album Résistance expands on this winning formula, while also making room for collaborations with Iggy Pop ('Sahara') and Elf Kid ('Mali Nord'). We're delighted to have Songhoy Blues joining us in Dingle, this December. Ahead of the performance, bassist Oumar Touré took time out to answer some questions for Other Voices.

When did you first fall in love with music?
It's not the same for all of us but for me, I loved music since I was young but it was in 2008 that I first started playing music.

Tell us a bit about the Songhoy Blues songwriting process?
It's a collective process. We write songs when one of us has a lyric idea or a rhythm idea. Then the rest of the band gets together to help to build it. I think each of us brings something different to the process.

When do you know a song is finished?
A song is never finished. They evolve all the time through playing them live. The recordings just capture a certain point in that evolution.

In a previous interview you mentioned recording conversations in order to write lyrics - is this still the case?
Sometimes! Sometimes a lyric just comes from something one of us says in conversation. Touring so much we have to write new music wherever we are, sometimes that means recording a voice memo on our phones and taking it away to work on it in soundcheck, in our hotel rooms or airports. It's different every time but you never know when inspiration will strike.

There’s hints of disco and funk in your sound in new song Bamako - did this music resonate with you growing up or is it a new influence?
I can't say when we got these influences but we always understand music in this sense. We've picked up a lot of influences over the last three years touring non-stop, almost by osmosis. I couldn't tell you where the influence came from, maybe seeing another band, maybe something we listened to in the van.

Would you consider your music political?
I think our music is engaged rather than political. We don't claim to have any answers but we try to denounce the bad side of politics in our songs, to highlight things we disagree with. It's about starting a conversation.

You’ve sung about the need for the diaspora to return to Mali and help rebuild it - is there signs of that happening?
You know our music can't change that right now, it's a big challenge, but we are very happy with the amount the people who are thinking about the return of the diaspora to rebuild the land. I think the diaspora have started to be more conscious of the struggles on the country where they come from.

For the uninitiated, is there other Malian music you’d like to recommend to us?
Baba Salah, Adama Yalomba, Afel Bocoum. Then of course there's the Malian legends like Ali Farka Toure, Fatoumata Diawara, Toumani Diabate. So much more too!

What people expect when you perform for us in Dingle?
High energy, good dancing, just embracing life in each moment!