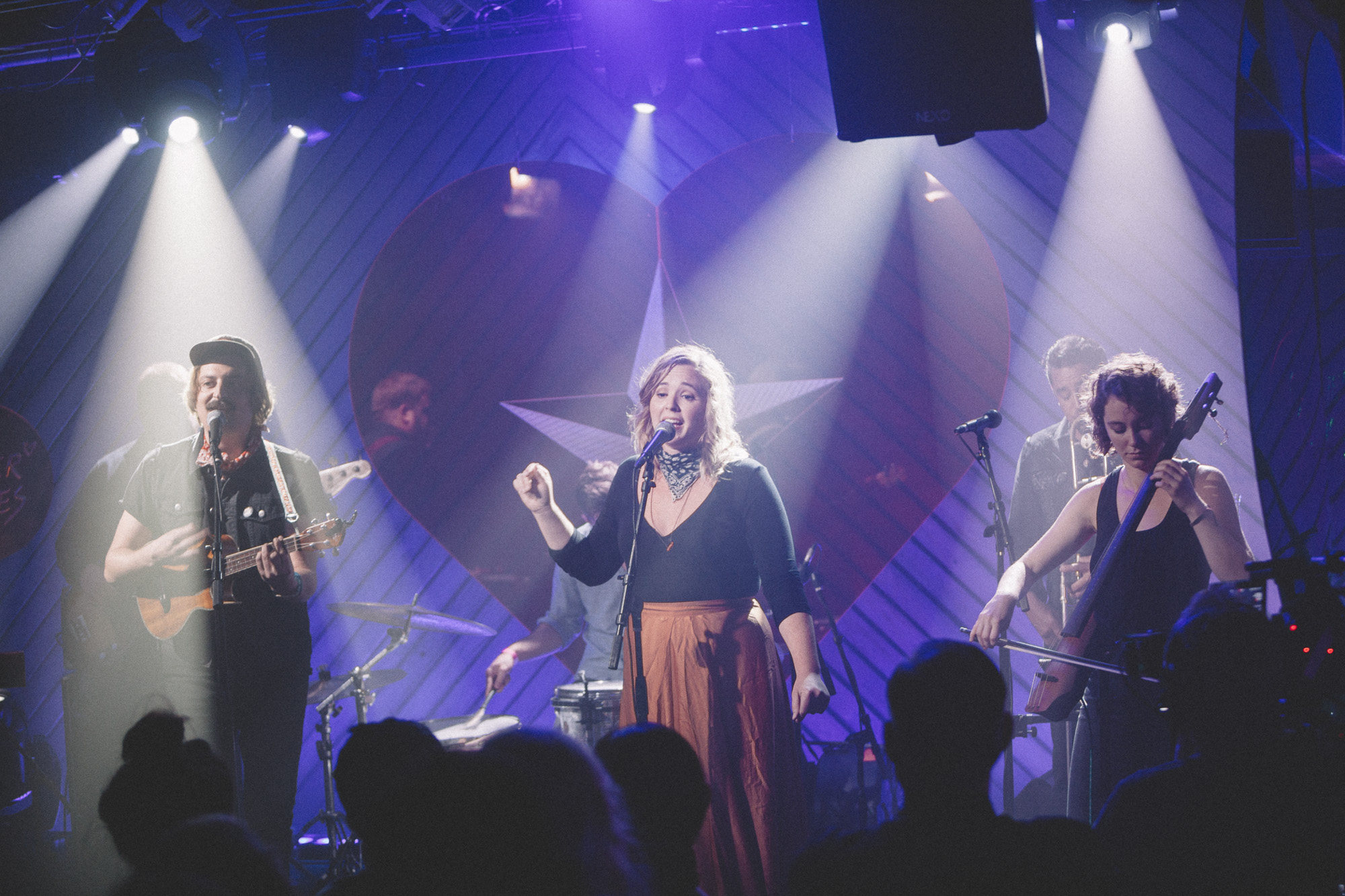 "We never half ass a show, we make sure to give it everything we got every single night".

When Other Voices visited Austin last October, we were introduced to local seven-piece Wild Child. Known for their inventive arrangements, high-energy stage shows and rich pop melodies, the Texan indie-poppers will be coming to Ireland this week, playing in Dublin at Whelan's on March 8th and Belfast at Empire Music Hall on March 9th. You can also see the group make their Irish TV debut when they appear on our Other Voices Austin Special broadcast on RTÉ2, Thursday 23rd March. Ahead of the shows Wild Child's Alexander Beggins spoke to us about coming up in the Austin music scene, finding their voice and collaborating with old friends.

How was your experience at Austin City Limits and Other Voices at Arlyn Studios?

Most of the band grew up in Austin, Texas so we have been attending since we were 14 years old, right around when we started playing in bands. It’s a really special festival for us and we were honored and excited to play it again. I think our highlight of the weekend was our Other Voices taping. There was an unreal amount of love and intimacy that moved through the air at the studio. Everyone involved on and off stage seemed to really want to knock it out of the park and there was a great amount of passion in all of the acts that we saw. Aryln Studios is so iconic as well. So many greats have recorded there. It was a special weekend and one we will not soon forget.

Is Austin a nurturing place for local music? Are there local acts you’d recommend?

Austin is a perfect petri dish for the cultivation of local music. I truly believe it is one of the best cities in the world to start a career in music. The entire city revolves around music. There is an unbelievable amount of talent in town but what I find helpful is the cornucopia of venues that allow you to start playing live at any stage in your development. Small venues that let you play for beer money all the way up to giant amphitheaters. We experienced this first hand; the upward ladder of venues that grow and adapt to our fanbase. It’s a special town as well because it feels like everyone is rooting for you. There’s not an environment of competition between bands which I’ve witnessed in other cities. And yes, there is so many good bands in town to recommend. Off the top of my head in no particular order: Sweet Spirit, Batty Jr, Molly Birch, Walker Lukens, Calliope Musicals, and so many more.

You met while playing as session musicians for a Danish band called The Migrant, what became of them, did they hear what you guys did next?

Yes, the Migrant is still around but with a new name, they are now called Rainbrother and they are doing quite well. Bjarke, the frontman, is still a dear friend to all of us and we see him when he tours the states. We always make sure to send him first cuts of our new records. We owe him a lot!

You’ve said that before the band started, you didn’t have a desire to be singers, was it a nerve-wracking experience to start playing Wild Child gigs? How did you gain confidence as a frontman?

Learning how to become singers and front people was absolutely the hardest part about starting Wild Child. They are two completely different tasks but tackling them involves a similar approach regarding confidence. Even singers with beautiful voices need some level of encouragement from outside sources to make them want to keep singing. You are so exposed and vulnerable when you sing, it can be quite terrifying. Our first few shows Kelsey and I would just stare at each other while we sang because we were too nervous to look anywhere else. I think it came off as endearing but it took a long time to be able to look anywhere else. As for fronting a band it just takes practice. You start to develop a style and start to work off what the crowd is putting out. It’s all interactive and now one of my favorite parts of the gig. Every night can change based on your desire to change it and make it special.

It’s been a couple of years since your last album ‘Fool’, which was focused on a heartbreak - how are your hearts these days and what are the plans for a fourth album?

I think the common theme of our music is our lyrical content. We write about what we feel in the moment as if you tore a page out of our journals. Music is our emotional outlet for our feelings. Yes, Fools primarally dealt with heartbreak, and so will our fourth record in a lot of ways. I think it may be more about the aftermath of a failed love and all the nasty strings and feelings that are attached to it. If anyone was afraid it might not be sad enough, don’t worry. I think there is an exciting new level of grit and balls to the new songs though.

You’ve been collaborating lately with Shakey Graves and Dr. Dog, what can you tell us about that?

We wanted our fourth record to be somewhat collaborative with friends and bands we’ve worked with over the last couple years. We started recording the record with Scott from Dr. Dog up in Philadelphia almost as a test to see if it was a good idea or not. The songs turned out so incredibly well. Essentially like a Wild Child song was put through a Dr. Dog filter. The same with Shakey and Matt Valaquez. Everyone we’ve worked with has such a beautifuly different brain than we do, and it was so fun to pick those brains and see how they approach writing music. We’re headed out to Holland this month to finish the record with Chris Walla of Death Cab For Cuties. I couldn’t be more excited to see how the record takes shape.

Have the musical influences that inform your music changed over the years? What’s been inspiring you lately?

We all listen to a wide variety of music which I think helps to keep new ideas in the mix. Our playlist will jump from James Brown to Kendrick Lamar to the Beach Boys to The Ratatat. It’s all over the board. We’ve been looking for new bands for inspiration, or new to us anyway. To name a few, Mean Lady, Mitski, and Liz Cooper and the Stampede. I guess we’ve been digging deep into old Motown classics too which I think you’ll hear on the new record.

How has Europe been for you so far? Is it harder to make the same connection with a foreign audience?

Europe has been amazing to us. I think the same connection is there but it is different. In the States, especially in cities we’ve played numerous times, the crowds have been known to get a little rowdy and rambunctious. In Europe, crowds are so respectful and you know they came to really listen to the music and take it in. Which makes for a different show, but we love it.

For anyone who has not seen you guys live, what can they expect?

If you haven’t seen us yet, I guess you can expect us to “leave it on the field”. We never half ass a show, we make sure to give it everything we got every single night. Expect sing alongs too and don’t be afraid to dance or cry and make a couple of toasts.

Wild Child play Whelan's on March 8th and Belfast at Empire Music Hall on March 9th. You can see their performance from Other Voices on RTÉ2, Thursdsay 23rd March at 23.25