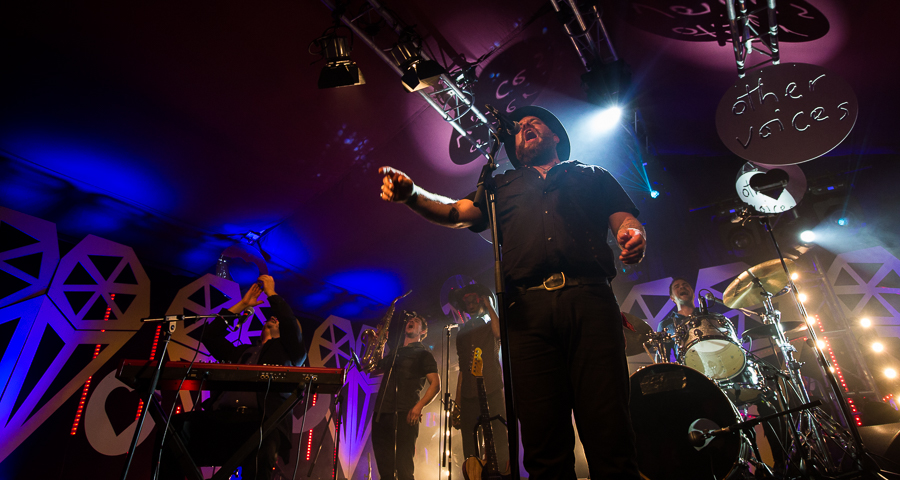 Nathaniel Rateliff and the Night Sweats played a foot-stomping set on the Other Voices stage at Latitude Festival yesterday.

Tell us a bit about how you made the jump from solo artist to Nathaniel Rateliff and the Night Sweats.

After I finished recording the last record I didn’t really have much to do and I’d been touring a lot on my own. Because of finances it’s sometimes hard to get everyone on the road. I had been wanting to do a soul R&B thing. It’s the music I’ve always loved. I recorded a few songs and put it out on a 45. I wrote two songs at home - just as a test - and I ended up really loving those two. Within a couple of weeks I had a whole bunch of new material.

Have you been to Ireland before?

I’ve been to Galway and Limerick. I played a show in Galway and went for a swim in the sea.

[chuckles] It was really cold.

How is the tour going?

It has been great. The response has been good. There have only been a couple of times where people have been surprised. I think one or two people have arrived expecting me to do my old thing. I had one guy who just stood at the front of the stage with his arms crossed. He looked really bummed but we just ignore that. We just have to look past him.

A few people call out for us to play older songs but no. I usually just announce that this will be something different to what they’re used to. We have an EP out now.

What can fans expect from the album?

Mostly pretty upbeat stuff. I tried to pick the songs I like the most.

What’s your favourite tune on the album at the moment?

One of my favourite ones is I’ve Been Failing. I love that one, then on the EP there’s one called How to Make Friends and another one that actually didn’t make it on the record. I’m trying to make another version of it.

What kind of music did you listen to when you were growing up?

I was always a big Sam and Dave fan, Sam Cooke and Otis Redding. Early James Brown too. I’d love to try to sound like that.

What are your plans for the rest of the year?

As of right now we’re touring into next year. The record comes out in August so then we’re back to Europe, the UK, Ireland, Spain and France.

What has been your favourite stop on the road so far?

We saw you put out an open call on Twitter for people to turn up and be in your video. How did that go?

Yeah, it looks great. It’s hilarious. We did that video which looks kind of like a prison dance. We had someone follow us around and shoot a bunch of b-roll for a video.

Nathaniel Rateliff played an incredible set for Other Voices at Latitude Festival. For fans of funk, soul, blues and rock, keep your eyes peeled for Nathiel Rateliff and the Night Sweats debut album. This is not one you want to miss. Make sure you catch them the next time they play near you!