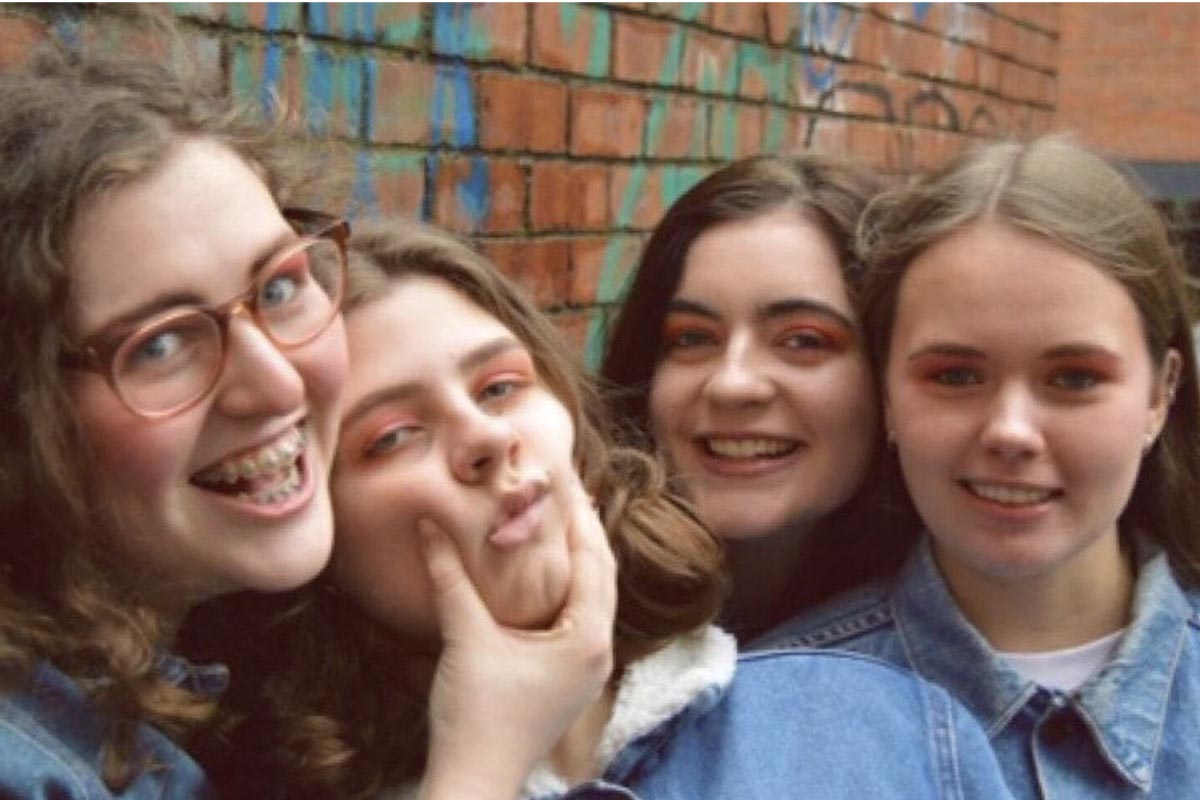 "Gigging and just playing music together in general has been a great outlet and stress reliever since we started back to school in September".

Limerick quartet PowPig may still be studying for their Leaving Cert, but that hasn't stopped them from becoming one of Ireland's best new band's. On the back of two exccellent EPs (2017's Denture Adventure and 2018's Buzz Buzz), the group has been hailed for their diverse and infectious garage-pop. The public vote winner's of 2fm's Other Room Open Call, we're delighted to have them with us for two performances in Dingle. Ahead of the gigs, they spoke to Danny Carroll about their early development, balancing studies, and what to expect this weekend.

How did PowPig form?

What music did you bond over?

K-pop has been a gargantuan factor in Leah and Andreea’s camaraderie, but all four of us have overlapping artists; the ones we all listen to are Warpaint, Tyler The Creator, Japanese Breakfast, Ru Paul, Technotronic and Fleetwood Mac. And, of course, we all love forcing each other to listen to our own music that we love, even when the recipients are less than enthusiastic.

Can you remember the moment you wanted to be a musician?

I don’t know if there was a specific moment that any of us can talk about. Playing music is fun, especially with each other. We’re all into each other’s different sounds and are into how each member influences songs in different ways. Right now we don’t feel we have earned the title, but eventually it would be a cool thing. Being able to do what we love for a living sounds like a bopping time, and we have been really enjoying what we have been doing so far.

Tell us about Music Generation Limerick - for anyone who doesn't know, what is it and how did they help you?

Music generation is a music education program in Ireland. They put on music lessons, go to schools and are a place for young people to meet and to write and form bands and ~beautiful friendships~. It’s a really cool thing to be involved in, there is a multitude of new, young bands, producers and rappers creating and developing their sounds at music generation centers across he country. It has been really fun being a part of that, and hearing all of the different things that go on every week. As well as that the tutors there are the best. They have given us advice on gigging, helped us with recording, helped us on specific songs and taught us basics in producing. They have played a really big part in helping PowPig develop into the thing it is today.

You've got to record with local guitar legend Steve Ryan from Windings and GiveAManAKick! What did you learn from him?

Steve is the best. We love Steve. He has been so helpful and we really appreciate everything he has done for us. Obviously he is a super talented man, and also really nice, like he’s a good guy, you know. Throughout our ~musical journey~ he has always been someone we could turn to for advice and he has always been encouraging with our music. Thank you Steve xoxo

How have you found the juggle of school work and "rawking out"?

Well last year we did a lot more “rawking out” than this year as three of us are in our Leaving Cert year and Leah’s in fifth year so we definitely had a lot less to worry about in terms of managing school and gigging. This year we've been cutting down on the amount of gigs we're doing, especially out of county ones, but it is definitely important for us to have a balance. Gigging and just playing music together in general has been a great outlet and stress reliever since we started back in September and we definitely want to do the odd gig here and there to take our minds off school work every now and then.

Are you studying music in school? Will a Leaving Cert examiner be treated to a private PowPig gig as part of your practical exam? Would you like to study music in future?

Unsurprisingly, three of us do music in school bar Leah because SHES A GEEK AND SWAPPED MUSIC FOR APPLIED MATHS; traitor.

All jokes aside , for our Leaving Cert we are considering bringing the band in for practicals. I mean , there’s no reason why not. We have the opportunity to do something fun and enjoyable even in the midst of study and stress so that’s something that can alleviate the pressures and whatnot. In regards to studying music in the future ; most of the time we have an idea of what we would like to do and although music is tempting, studying it full time can sometimes take the fun out of it and put an emphasis on perfection. So for now, I think we’re just enjoying the time we have in our own messy way.

I really like how you guys swap vocals, and sometimes instruments for each song - tell us a bit more about the PowPig songwriting process?

Well, the songwriting process is quite chaotic in the PowPig household. Ok not really, but it takes awhile to actually sit, calm down and take a moment to think about what we’re doing. Which usually ends up in us doing nothing. The way we write our songs isn’t too over-complicated. It usually consists of someone having an idea on an instrument and then the others building around it. For example; if Leah had an idea on guitar, she’d show us and we’d do whatever the heck we think sounds cool. Either that or we just jam for a bit and if we really like what we’re doing, we develop it into something more - That’s how Birds Of Paradise was written.

Who are some local bands we should be listening to?

Limerick has a really great music scene which we're so lucky to be a part of. Some of our favourites include; Anna's Anchor, Rusangano Family, Cruiser, Inner City Radio, Same d4ence, Van Panther, Emma Langford, windings, Post Punk Podge and the Technohippies, Casavettes, Rokaia, Protobaby, Scenes and Naïve Ted.

You've released two EPs so far, when would you like make an album?

We're in the process of finishing up recording two new songs which we're planning on releasing as singles sometime in the New Year. We're also hoping to record our first album in the summer after the Leaving Cert once we're all free!

Have you made all your own videos and artwork so far? Would you like to keep the DIY approach going in future?

I think for now, we’re gonna keep that approach because we really like going through the creative process on our own, no matter how tedious. But I think in the future we might adapt to something more efficient. Who knows!!

For anyone who's never seen you, what can they expect when you come to Dingle?

On Saturday we're playing the Other Room at 2pm and are playing two songs that we supposedly know well but I guess we’ll see how that goes, with us being nervous and all. One from Denture Adventure and one from Buzz Buzz (tune in to find out which ones!). On Sunday we’re playing again in Nellie Fred's at 2pm. We’ll be playing some songs from the two EPs that we have already released (bangerz™️). We’ve decided to also play two songs that we are hoping to release soon which will be fun (watch out for Mayday and Pretty Woman). We also have a song that we’ve only played live once before, so we’ll see how well that goes (a bop called Just Love Me) Hopefully it will all go well, and be super duper fun.