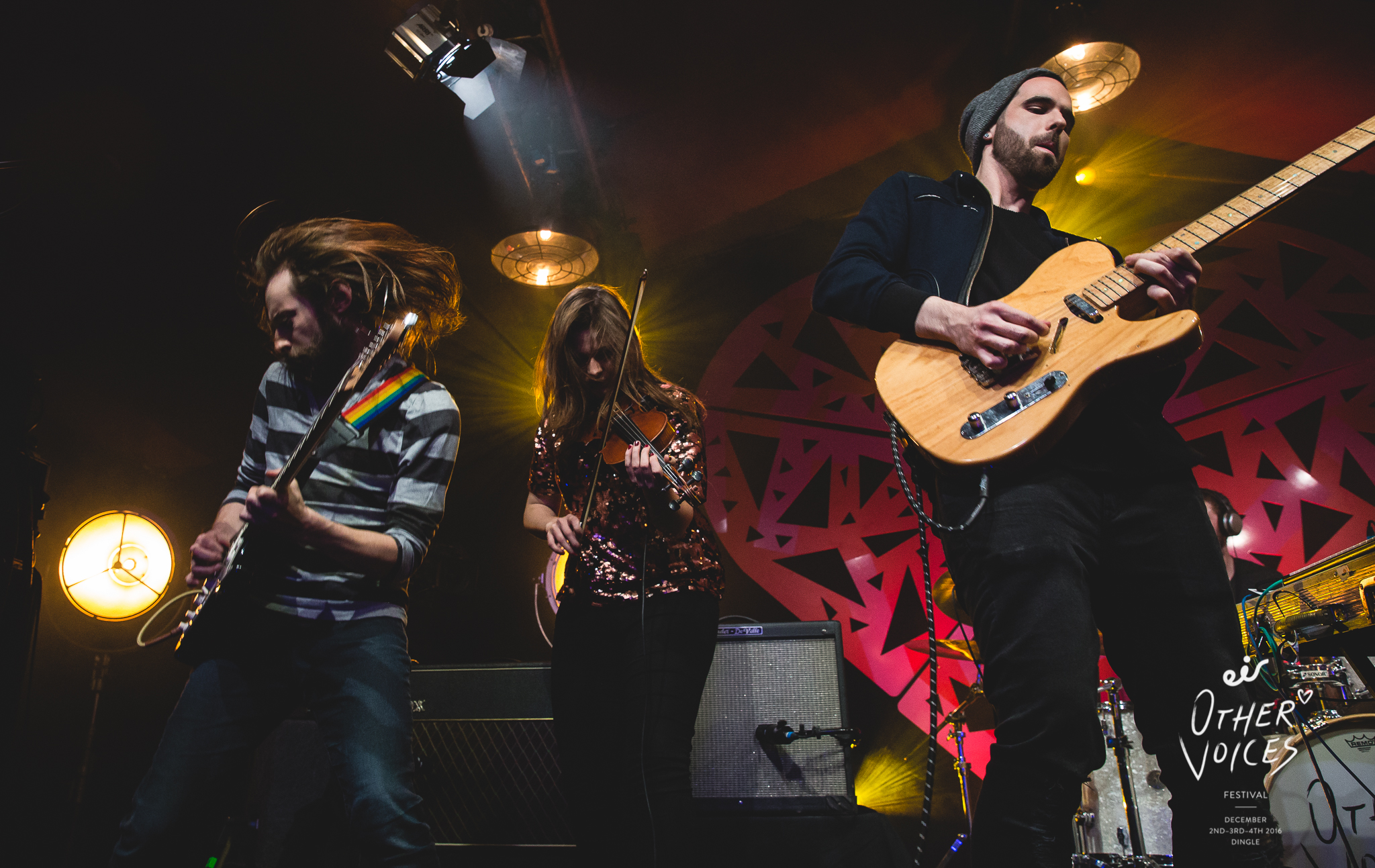 "Usually someone has an idea or a part that they want to show the group. After their idea has been destroyed we are generally on track to writing a new song..."

Overhead, The Albatross have bided their time on the Irish music scene. Releasing their debut EP in 2011, a full-length follow up was a long time coming for the six-piece ensemble. When 'Learning To Growl' arrived in May 2016, it marked the sound of a band fully-formed, taking control of their creative destiny with a dense and ambitious debut. They joined us in Dingle to play a suitably energetic set, which you can see on the Other Voices IMRO Other Room Special, broadcast on RTÉ 2- Thursday 9th March at 23.30. Ahead of this, we spoke with Overhead, The Albatross about their writing process, diverse influences and retreating to a small town in the Czech Republic.

For those that don’t know, how did Overhead, The Albatross begin?

David (Piano) and Stevie (Guitar) were in a band called Melophobia. After Melophobia had split, the guys decided that they wanted to start a new band. After a series of phone calls and a few practice sessions O,TA was formed. Most of us were friends beforehand, it was just good timing that we all wanted to play music together but weren’t in other bands at the time.

How has the group evolved since then?

I think that when we started out we weren’t entirely sure of what type of music we wanted to play. After a few practices ‘Jonah’ was written and ‘Lad’s with Sticks’ fell into place. Since then we have always tried to expand where our music can go. We all agree that it is good to explore as many different styles as possible while trying to maintain our own stamp.

You went to live in Czech Republic to write and develop songs for your debut album ‘Learning To Growl’ - what made you do that? What can you tell us about that experience?

We went to the Czech Republic so we could write away from distraction. In order to achieve that, we travelled to a small forest, twelve kilometres from the nearest town called Pisek which is an hour south of Prague, we stayed there for three months. It was an incredible experience as we tried to remove ourselves from the outside world as much as possible, we didn't have phones or internet which was very refreshing. It all sounds very pretentious! but every Sunday when we went shopping for supplies we would gorge on internet for a few hours in the only cafe in Pisek, we aren’t completely ridiculous.

How do your songs develop? Do you discuss them in terms of mood or theme? Are titles in mind beforehand to collectively direct the music?

Usually someone has an idea or a part that they want to show the group. After their idea has been destroyed we are generally on track to writing a new song. Our songs can take a long time to develop. We work a lot with laptops, recording parts and trying to write over them. Then we bring the songs into the room and jam them out. Sometimes we discuss the feeling we want to evoke and then go about trying to achieve that. Titles are never in mind beforehand.

You got members of the National Symphony Orchestra and a children's choir to perform on your first album, do you have any ambitious plans for future recordings?

Now...that would be telling.

Naturally you draw comparisons to Pink Floyd, but what music is inspiring you most recently?

There are so many people who play in this band and contribute to the writing that it is hard narrow down what all the influences are. Strangely enough we don’t listen to ‘post-rock’ which is the genre we have found ourselves in. However between us we listen to a lot of neo-classical, electronica, hip hop, folk, pop and rock. We also take a lot of influence from films and film scores. I also think that local Irish music has been very inspiring in recent times with so much variety coming out of such a small pond of people.

Given the delay around your debut album, do you have lots of new material to draw upon for a follow up?

We have a lot of ideas alright, I think it might take another pilgrimage of isolation to structure them all. This time not for as long.

How was your weekend at Other Voices? Did you get to see any other acts when you were in Dingle?

Other Voices was amazing, it is one of our favorite festivals, all the festival fun but with no tents. While we were down there we saw ‘Fangclub’, ‘Slow Skies’ and the bottom of a few glasses.

For people who haven’t seen Overhead, The Albatross live, what can they expect?

Well we’ve been described as energetic and loud combined with a great light show, hopefully people will continue to like that combination.

We hope to release more stuff throughout the year, more music and videos. We also have lots of gigs and festivals planned.