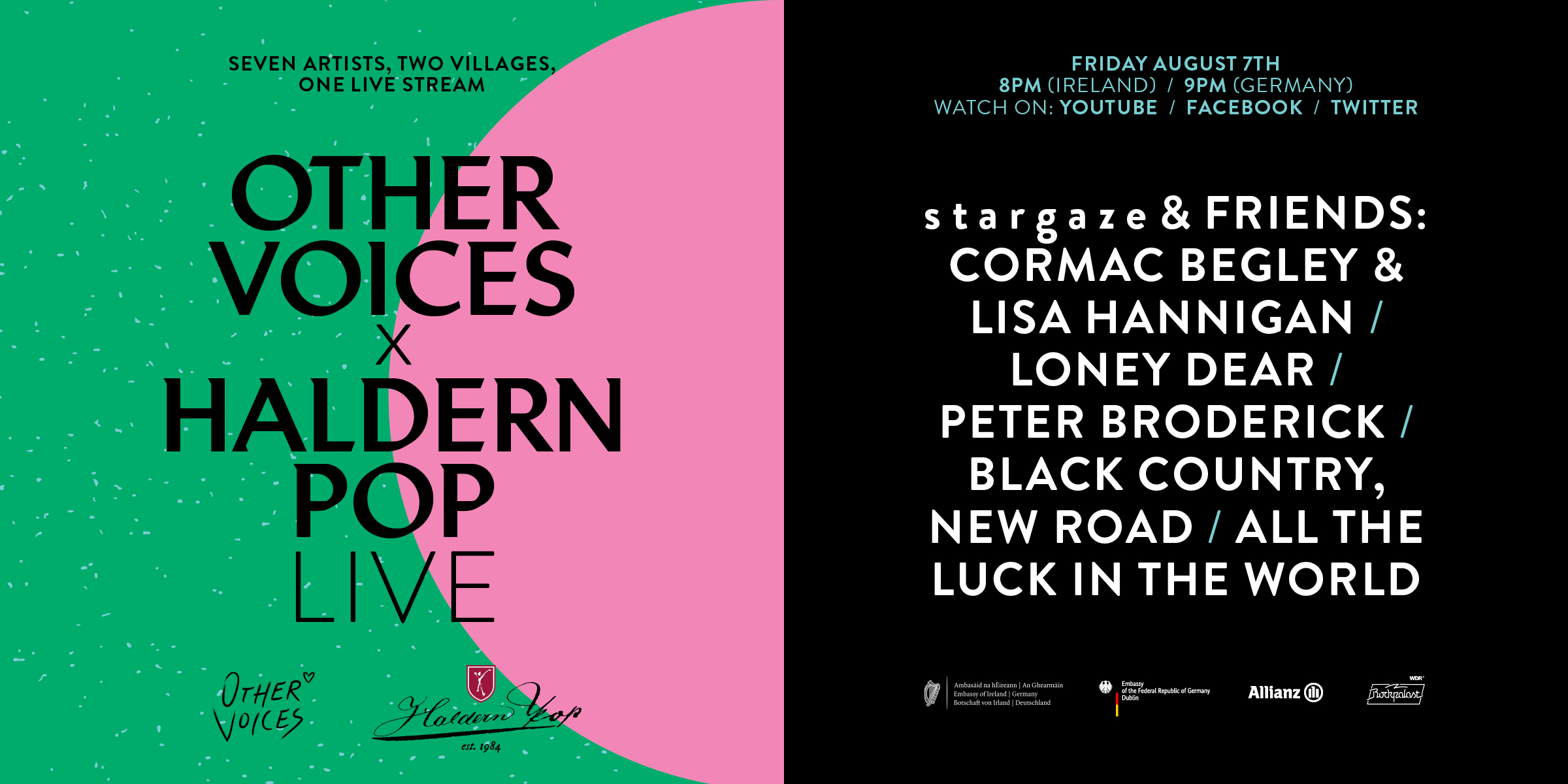 Seven artists, two villages, one live stream: a musical conversation between the West Coast of Ireland and the heart of Europe.

Other Voices and Haldern Pop festival are collaborating to produce a live 90 minute stream, of music and song connecting Dingle (the home of Other Voices) with Haldern (home of Haldern Pop Festival), west Germany, with artists performing from both locations, live.

This project will build a musical and cultural bridge from Ireland and Germany at this time of separation and isolation. It is an opportunity to connect the West of Ireland at the Edge of Europe to the heart of Europe. Two villages, speaking to each other live and in real time. The effect of this will be to collapse distance between our two countries and to engage in a musical conversation and share this conversation with the world.

s t a r g a z e director André de Ridder has a long-standing relationship with Ireland via his collaborations with Lisa Hannigan, Conor O’Brien (Villagers) and most recently with choreographer Michael Keegan-Dolan who along with Cormac Begley produced and delivered one of the most remarkable dance events of 2019/2020 - MÁM. s t a r g a z e are regular guests at Haldern Pop for many years and André de Ridder and Philip King (Other Voices) began a conversation during the period of lockdown wondering would it be possible to connect Dingle and Haldern together, musically, this August whenHaldern Pop festival was due to take place. And so it has come to pass with the assistance of the Irish Embassy in Germany (Ambassador Nicholas O’Brien), The Department of Foreign Affairs, the German Embassy in Ireland (Ambassador Deike Potzel) and Allianz, coming together to support and enable this possibility. With Germany holding the Presidency of the E.U and with Brexit imminent, the timing is serendipitous.

Founder of Haldern Pop Stefan Reichmann said ''Believing in something is not an instrument of science but of confidence. To share energy and counteract polarization, you need the magic of community, you need culture In our villages, planting, cultivating and harvesting something is an understandable and existential rhythm, a ritual with which one grew up. What unites us at the end of the day are often the stories that have become clay, so that after the friction of the workday, we can once again feel the common ground. This insight can be described as a cultural process, the music as a connection of the big picture, as a familiar promise to share all these things, not to take the feeling for each other and the competition into bed with us. What we can learn from the villages for Europe we try to tell musically with our first step with Other Voices in Ireland and Haldern Pop in Germany."

s t a r g a z e director André de Ridder said: ‘ For s t a r g a z e, during this difficult and, for performing artists, existential time, bringing together two places that played and play an important, formative role in our own history as a group, as friends and musical collaborators, means the world to us. Our musicians‘ collective is a quintessentially European group, with people living all over the continent, coming together especially for each of our unique projects. This crossing border and crossing musical genres ‚mentality’ is something we feel brings people and audiences together, and we’re so excited and grateful that this cooperation between Dingle, Other Voices and Haldern Pop enables us to continue to do so and make an artistic statement about how important this kind of coming-together is, on so many levels.’

Ambassador Deike Potzel said “Still fondly remembering the fantastic concert organised by Other Voices featuring Stargaze in Berlin last year on the occasion of President Higgins‘ state visit to Germany, I am delighted that we are continuing to build cultural bridges between our two countries. A very big thank you to the organisers and artists involved. It’s magnificent to see these
ties grow.”

Allianz Global Life CEO Giampaolo Viseri is highlighting the courage the Other Voices Team had to go ahead with the festival in these special times and is proud to sponsor this event. Courage and being a fair partner are core values for Allianz. Simon Dauber COO says that with passion and a positive attitude great things can be achieved. He is wishing all great success and hopes that further bridges can be built between Ireland and Germany.’