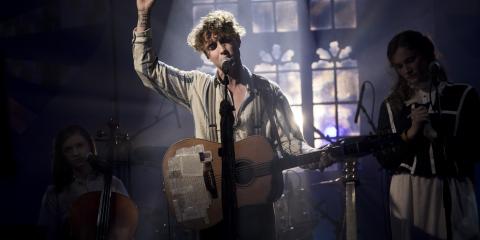 Other Voices returns to RTE 2 on Thursday 21st of February

Starting on Thursday 21st of February, the seventeenth series of Other Voices will run for nine weeks, with some of the most remarkable artists making music right now: Villagers, Dermot Kennedy, Julien Baker, Gruff Rhys, Maverick Sabre, Jade Bird, Sigrid, Kojaque, Passenger, Mahalia, David Keenan, Little Green Cars and many, many more. Series 17 is presented by Annie Mac, Huw Stephens and May Kay.

Hotly tipped by BBC Sound of 2019, R&B UK soul star Mahalia returns to Dingle to perform hits ‘Sober’, ‘I Wish I Missed My Ex’ and will be speaking to Annie Mac about her career to date. South African artist Nakhane has been aptly hailed by The Guardian as one to watch and ‘an LGBTQ trailblazer’, this mesmerizing performance in St. James’ Church is not to be missed. Super Furry Animals front man Gruff Rhys joined us from Wales and UK up-and-comer Jade Bird shows us why her blend of firey-pop has excited the music industry.

In this series, an exceptional group of artists highlight the contemporary music scene in Ireland; David Keenan, Kojaque, Loah, whenyoung, Maria Kelly, TOUTS, Jafaris, Ye Vagabonds and Dermot Kennedy, showcase the wealth of talent emerging from this island across all genres of music.

For our first trip to Ballina, Co. Mayo, we were joined by indie singer and guitarist from Memphis Julien Baker and winner of the Brit Award’s Critic’s Choice for 2019, Sam Fender. Later in the series, Huw Stephens sits down with Fender to discuss issues such as masculinity, depression and government surveillance that inspired his music.

English-Irish soul singer Maverick Sabre, who grew up in New Ross, Co. Wexford, made his Other Voices debut in Ballina performing new music from his forthcoming record ‘When I Wake Up’. Longtime friend of the show, Villagers returned to perform songs from their exceptional number one record ‘The Art of Pretending to Swim’.

In the IMRO Other Room Special we will be joined by winners of the Open Call 2018 Pow Pig, Columbia Mills, Mango x Mathman, I Have A Tribe and Kitt Philipa.