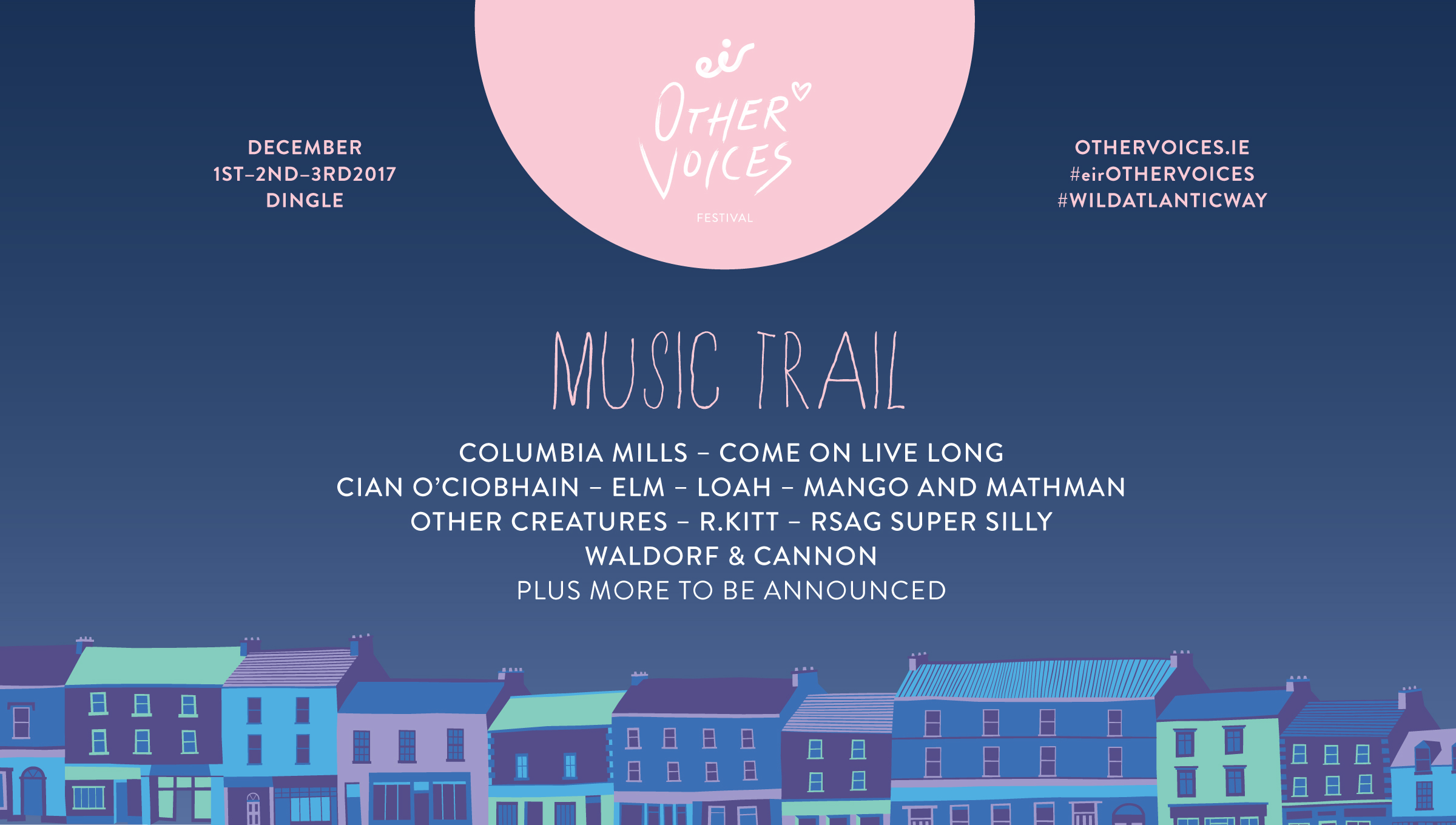 The fantastic first acts have been announced for the Other Voices Music Trail.

Taking place in several venues across Dingle, the Music Trail brings a bit of Other Voices out of St. James' Church and into the town, staging free gigs throughout the afternoon and into the night. As ever, this year's line up is set to showcase the diversity of Irish talent, featuring a rich mix of rising new acts, music scene veterans and surprise special guests.

Joining us in Dingle this December we have...

Columbia Mills describe themselves as "Joy Division playing the Grand Ole Opry". A, dark, ambient, guitar band with a deep south sensibility, the Dublin quintet have just released their debut album, produced by Rob Kirwan (Hozier, U2, Depeche Mode). Tipped as one of the most exciting bands to emerge from the Dublin music scene in years, we're delighted to have them with us in Dingle for the Music Trail.

Come On Live Long is a fitting name for one of Ireland's most enduring groups of recent years. Gigging now since 2010, the group has been rightly described by Nialler9 as "one of the best live bands in Ireland". Performing with an assortment of acoustic, electric and sampled instruments to create a sound that has been described as “widescreen, with superb electronic swagger", you won't want to miss them on this year's Music Trail.

Hailing from west Kerry, Cian Ó Cíobháin is best known for his long-running, renowned radio show An Taobh Tuathail (The Other Side), which has been broadcasting a treasure trove of underground delights on RTE RnaG since 1999. Alongside Cyril Briscoe, he is one of the founders of Galway club night ‘110th Street,’ which has held residencies all around the city, as well as in Dublin, Cork and Limerick. He has been regularly DJing all over the country for the past 25 years, and joins us in Dingle on the Music Trail this December.

Elm describe themselves as "four queers who love all things pop". The quartet matches vocal androgyny with unforgettable cello lines, creating a unique sense of originality within the constraints of the pop realm. With a presence that bewitches, Elm embodies the sound of a new nonuniform generation to express themselves in their own stunning way.

Loah is Sallay Matu Garnett, a singer songwriter of Sierra Leonean/Irish origin who grew up between Maynooth and West Africa. From an early age she was given a solid classical training on violin, playing in orchestral ensembles and singing in choirs. Her first forays into songwriting began when she became acquainted with the piano as a teen, but it was not until her time at Trinity College in a soul-funk band that she began to take writing more seriously. Loah combines her unique blend of folk and soul which she calls "ArtSoul". Hailed by Village Voice for her "stirring songs reflecting her diverse roots", in May 2017 she released her debut EP This Heart to critical acclaim. Having joined us on the Other Voices stage at Electric Picnic, she makes her first trip to Dingle for The Music Trail this December.

Northside Dublin MC, Mango Dassle has been active in the Irish Urban Music scene for 5 years. A former member of the ‘Animators’ collective, Mango has now stepped in to a more mature and unique sound that hasn’t been heard from Irish shores before. Raised on pirate radio tapes and Dublin Street culture, Mango carries the flag for the city. His first single ‘Badman’ produced by Dublin producer MathMan is a hard hitting, grime influenced street anthem. Filled with Dublin quips, Irish slang and Mango’s razor sharp delivery, they're bringing a bit of Dublin to Dingle this December.

Dublin trio Other Creatures have been honing their craft as part of the celebrated Trout Records imprint (home to Saint Sister, Tandem Felix and Spies). The band's first release ‘Luxembourg’ is one loaded with jagged guitar chords and thunderous drums, giving it a post-punk flare that is brightened by the energised vocal melodies of Konrad Timon. This truly infectious track is an indie gem reminiscent of bands like Pavement, Interpol and Band of Horses.

Rarely Seen Above Ground a.k.a Jeremy Hickey is a Irish multi-instrumentalist who has gained the reputation as one of Europe's leading drummers. He's been hand picked by various international acts including Grammy Award winning Xavier De Rosnay (Justice) and Cosmo Vitelli (I'm A Cliche label) as well as leaving an explosive trail on festival circuits at home and abroad. R.S.A.G. has been making waves since 2008 as one of the countries most talented solo artists with his organic, electronic, percussive sound. Live he experiments with a virtual band while his drums, vocals and sampler are mixed with an array of hypnotic imagery and silhouettes projected on-screen.

r.kitt is a DJ and producer from Dublin. He makes house music that tries to convey a deep emotional message while still getting you moving. His productions are awash richly complex melodies. Melody is the central figure of his musical expression but the tracks he makes still have clear nods to the classic sounds of early Chicago house productions. His music is about 2 things, emotion and dancing. One third of the influential Dip DJ Collective and known to perform with his brother David under the moniker Spilly Walker. Recently, he released his debut EP on Pear Records, a new sub label off of All City Records with loads more records to come in the new year.

One of the key names in the ever growing and acclaimed Irish urban music scene, Super Silly are four musicians who first met playing gospel in their local church, bringing a rare sense of passion and fun to modern RnB. Tipped for great things in 2017 by the likes of Nialler9, Goldenplec and The Thin Air, the quartet of Whodis, Glory, Solbas and Grvz began a run of releases for in March with ‘Not Ready To Leave’, a track that mixed classic soul and RnB, modern hip-hop and the joyous energy of their gospel roots. Having joined us at the Electric Picnic in September, we're delighted to have them with us in Dingle this December.