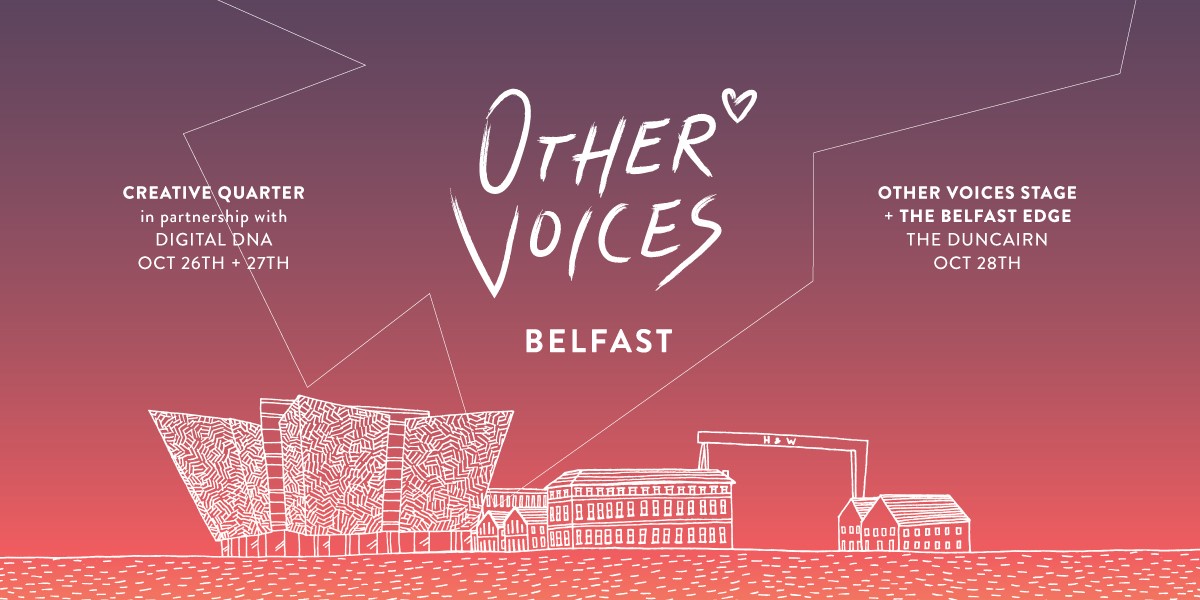 This October 26th - 28th, Other Voices Belfast will burst into life - a three-day gathering of music, creativity and technology, in one of the world’s greatest musical cities.

Dingle to Derry, Texas to Berlin, New York to London - over the last 16 years, Other Voices, the internationally acclaimed music television series and arts festival, has ploughed a rich and diverse musical furrow, seeding song, story, banter and debate in towns and cities across the globe. This October 26th to 28th, 2017, Other Voices will join forces with Digital DNA, the 174 Trust and Duncairn Centre for Culture and Arts to bring this dynamic event to Belfast, with the support and investment of Belfast City Council, the Department of Foreign Affairs and Trade, Creative Ireland, BBC Northern Ireland, RTÉ and Tourism Northern Ireland.

Lord Mayor of Belfast Councillor Nuala McAllister said: “As we prepare to submit our bid for European Capital of Culture 2023, the spotlight is being shone on the city’s thriving culture and arts scene, and I’m delighted that Belfast City Council is helping to bring Other Voices to Belfast for the first time. I hope it will be a precursor for more exciting events for the city.”

Minister for Foreign Affairs and Trade Simon Coveney T.D., said: “Culture and creativity are a powerful force for reconciliation and I'm really pleased that my Department's Reconciliation Fund has supported this exciting event which offers people in Belfast and beyond an opportunity to come together and enjoy a unique shared experience.’’

Minister for Culture, Heritage and the Gaeltacht Heather Humphreys T.D., said: “The Creative Ireland Programme, which I launched last year, is about placing culture at the centre of our lives. Creative Ireland sends a very important message to audiences at home and abroad about how we value our culture and the wealth of creativity of our children, communities and artists. Other Voices provides a unique opportunity for the creation of a range of dynamic and exciting conversations and creative collaborations between artists, audiences and innovators.”

On Thursday 26th and Friday 27th October, schools, youth and community organisations from across Belfast will come together to take part in four events as part of the Digital DNA Creative Quarter, showcasing the power of community through the mediums of music and technology. These innovative, inclusive events will feature speakers and workshops with some of the biggest names in digital, technology and the creative industries including Catalyst Inc., Techies in Residence and Speed Motion.

On Saturday October 28th, The Belfast Edge takes up residence in The Theatre at The Duncairn, a conference that aims to create discourse and collision of ideas around creativity, culture, technology, education and investment policies, firmly placing creativity at the centre of all policy-making and practice. The Belfast Edge is an extension of Ireland's Edge, which takes place in Dingle, West Kerry, every year during Other Voices. The line-up of speakers and facilitators will be announced shortly. Attendance at The Belfast Edge is free but ticketed and capacity is limited. Those wishing to attend should register for tickets at Eventbrite on https://www.eventbrite.ie/e/the-belfast-edge-tickets-38662349127 Tickets will be allocated on a first come, first served basis. One ticket per applicant, subject to availability. The Belfast Edge will also be streamed live on Facebook at the Other Voices page.

That same evening, Saturday October 28th, slamming guitars, soaring vocals and earworm choruses will echo around the walls of The Duncairn’s School Hall, where The Other Voices Stage will be in full swing. A feast for the senses, this potent evening of live music showcasing the best in new musical talent, will feature sets from Grammy shortlisted trad giants Beoga, lo-fi acoustic gems from Portadown’s Jealous of the Birds, Kildare pop-rock, arena touring duo Picture This, the spine-tingling atmospheric folk of Hampshire born, Donegal bred Rosie Carney and Derry purveyors of punk Touts. The show will be recorded by Other Voices for broadcast on both BBC and RTE television.

Other additions to the line-up will be announced shortly.

Tickets for The Other Voices Stage will only be available through local media and online competitions, details of which will be announced shortly on www.othervoices.ie and at @OtherVoices on Facebook and @OtherVoicesLive on Twitter and Instagram.