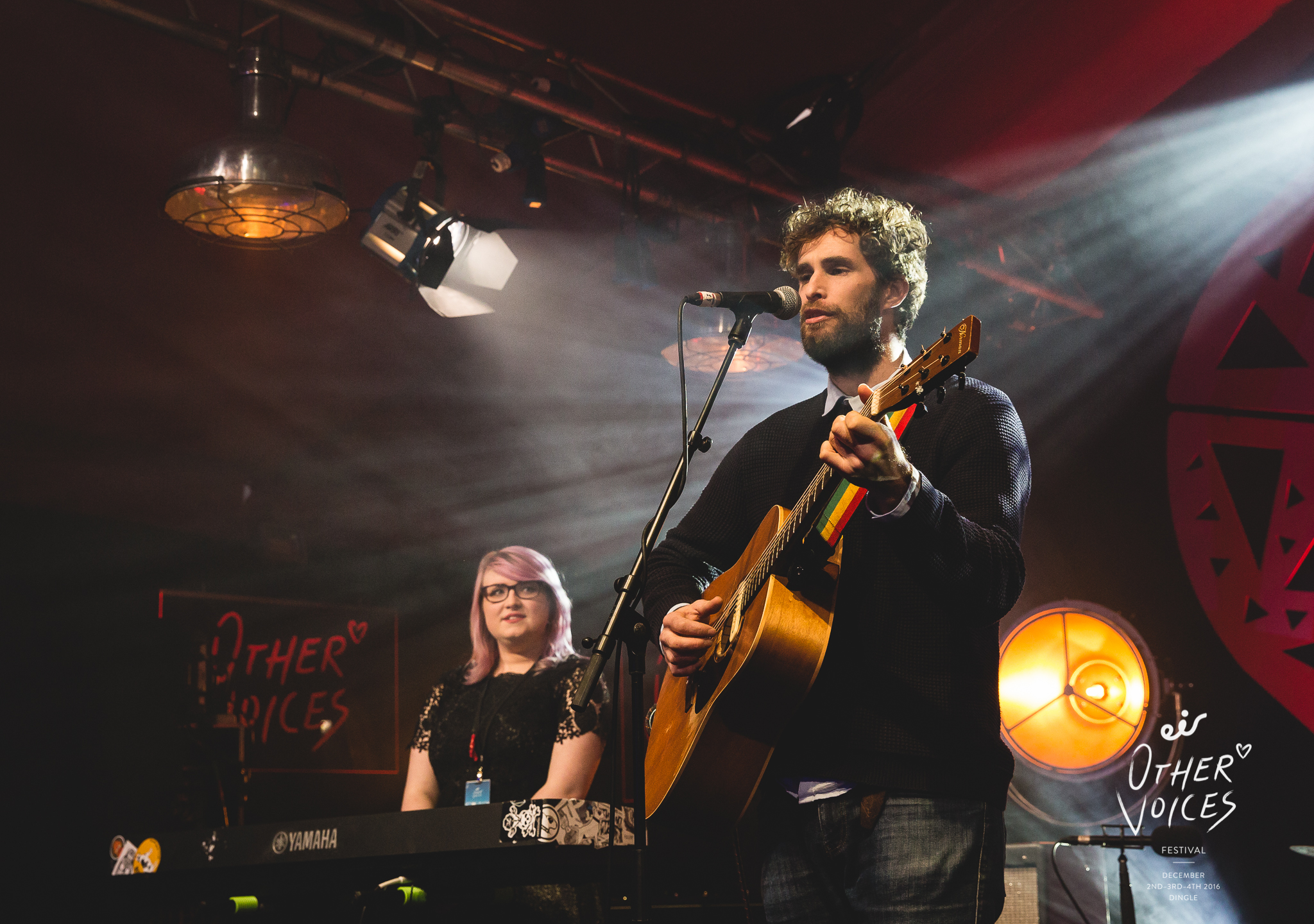 Moon Looks On are a five-piece with a sound that takes in an ambitious fusion of genres. Fundamentally a folk group, interested in storytelling, their music also makes room for touches of soul, country and reggae. Although a relatively new propostion, with one EP to their name, Moon Looks On put in a seriously impressive performance at Other Voices in December. You can see them in our IMRO Other Room special, broadcast on RTÉ 2, Thursday 9th March at 23.30. To find out more about what makes them tick, we quizzed frontman Stephen Gormley about his musical background and writing process.

How did Moon Looks On begin?

Moon Looks on, started as just myself. I'd be working away gigging with The Stephen James Band (also me), and things had kind of naturally dissipated and I wanted to start a new solo project. So sitting at my dining room table I began to forage amongst old poetry songs and stories for a name that reflected where I wanted to go.

Where does your band name come from?

At this time I was living in a house on Thomas Moore Road in Walkinstown in Dublin,and I started to read some of Thomas Moore's poetry and within one of his works titled, 'While Gazing On The Moons Light', I found a line that said “The moon looks on” and I thought man, I really like that turn of phrase.

What influences did you bond over?

Appreciation of life, laughter, banter, friendship, similar tastes in music and a very strong work ethic. We got on very well and everyone in the band is incredibly creative and a bit cracked in the best possible way!

For people who have never heard Moon Looks On, what song should they listen to?

Hmm, hard one that, depends on what mood your in I suppose. My favourite track off the new EP is probably 'Let It Out Let It In'.

Moonlookson Let It Out, Let It In copyright 2016 IMRO

You’re originally from Sligo, was that a good place to play music growing up?

I love Sligo, that's certainly where my love for music began. All of my family are music lovers with varying tastes in different genres and still common threads that they all are in to. I started collecting vinyl and was really into records for a good number of years and then I moved to Galway. This was the start of my love for songwriting and playing music.

What can you tell us about your songwriting process?

It varies from song to song to be honest. I never really thought about it too much, I just wrote what I felt, usually stuff I didnt say in everyday conversations. I started to write and I wrote about 100 songs that first year and I still play some of them to this day, although in fairness a lot of them were shit. I just needed to write. These days I've started to use Abelton a lot when I'm writing. I've got a little small studio set up (just a corner of a room job), but when I get ideas I'll sit down with my guitar and record what I've got in my head and build on it from there. I love to read and I find the more I read the more I feel the need to write, its like your making space in your head for more information.

You put to music a WB Yeats poem ‘Those Dancing Days Are Over’ - is poetry usually an inspiration point for you?

I really like poetry, I didn’t appreciate it enough when I was in school, but I definitely feel a strong tie to Irish poetry, it resonates on some deeper level that I can't quite explain. That poem by Yeats was one I chose as part of a show that was being put on in The Hawkswell Theatre in Sligo.

You’ve said before that “the bones of the music are built around the songs told as stories” - what stories are you telling on your most recent songs?

To be honest I'd say I'm probably just telling the story of my journey in life thus far. I don't really dress it up too much and I can never really analyse it in depth either. I just feel it and spit it out onto the page, make a song out of it and if I like it, I keep playing it. The stories mean different things to me at different times .

What was it like playing in the IMRO Other Room?

It was properly amazing, best moment of my musical path so far. It really was such an honour to play such an esteemed gig, it felt REAL GOOD!.

Did you get to see any other acts on the Music Trail?

Got to see Fangclub, Overhead The Albatross and Cry Monster Cry. I missed For Foresters and was gutted, love their music. Rambled from pub to pub and then settled in for the night in Currans Bar till way too early!