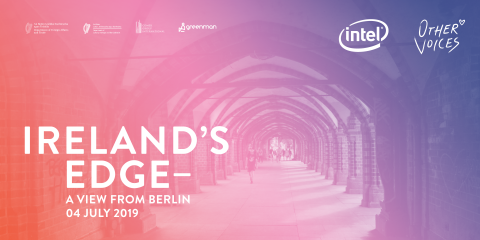 Ireland's Edge: A view from Berlin

Other Voices is delighted to announce that an Ireland’s Edge conference will take place on the afternoon of 4th July in Fluxbau, Berlin.

Over the past 4 years Ireland's Edge has brought together some very disparate groups: artists and musicians, those working in technology, media, third level education, government, corporate and FDI sectors. Many of the attendees tend to congregate in work related silos and rarely have the opportunity to spend time with or meet professionals and creatives from outside their own area. The results have been very memorable encounters on stage amongst panelists and speakers and between attendees themselves. Ireland’s Edge has sparked debate and discussion which has had a reverberative effect in those sectors. This is very much the Ireland's Edge USP.

The recent visit of the German Foreign Minister Heiko Maas to Dublin underlined the strong connections between Ireland and Germany. Both governments saw the visit as an occasion to express strong mutual solidarity and defend multilateral rules based international systems.

The programming of this short conference of Ireland's Edge in Berlin will be broadly reflective of this and of the nature of Irish-German relationships in the context of Brexit and its anticipated impact. Ireland’s Edge: A View from Berlin will contribute to discussion around the need to nurture and develop that relationship in all its aspects cultural, political, social and economic.

On the 4th of July 2019, we will be joined by long-standing author, broadcaster, commentator and cultural entrepreneur, John Kampfner. John began his journalistic career as a foreign correspondent with the Daily Telegraph, first in East Berlin where he reported on the fall of the Wall and the unification of Germany, and then in Moscow at the time of the collapse of Soviet Communism. He went on to become Chief Political Correspondent at the FT and political commentator for the BBC's Today programme. He is a regular contributor to the opinion pages of British and international publications and on broadcast outlets. As Editor of the New Statesman from 2005-2008, he took the magazine to 30-year circulation highs. He was the British Society of Magazine Editors Current Affairs Editor of the Year in 2006. He has written five books. These include the best-selling Blair’s Wars (2003), now a standard text in schools and elsewhere on the ex-prime minister's Iraq intervention and other foreign policy; Freedom For Sale (2009), which was short-listed for the Orwell Prize in 2010 and in 2014 The Rich, from Slaves to Superyachts, A 2000-Year History. Fluent in German and Russian, he is a regular speaker at international conferences and symposia. John’s upcoming book ‘Why German’s Do It Better’ will be published in 2020.

We will also be joined by Aoife Ní Bhriain, a violinist from Ireland. Aoife has spent the last three years studying in Leipzig. She has performed as soloist and recorded with various orchestras in Europe and Asia including; the RTÉ Concert Orchestra, Wooden Elephant, Korean Chamber Orchestra, MuKo Orchester Leipzig and many more. She has also collaborated with musicians from all genres including singer songwriter and Oscar winner Tim Robbins and his band of Rogues, Kate St. John and Martin Hayes.