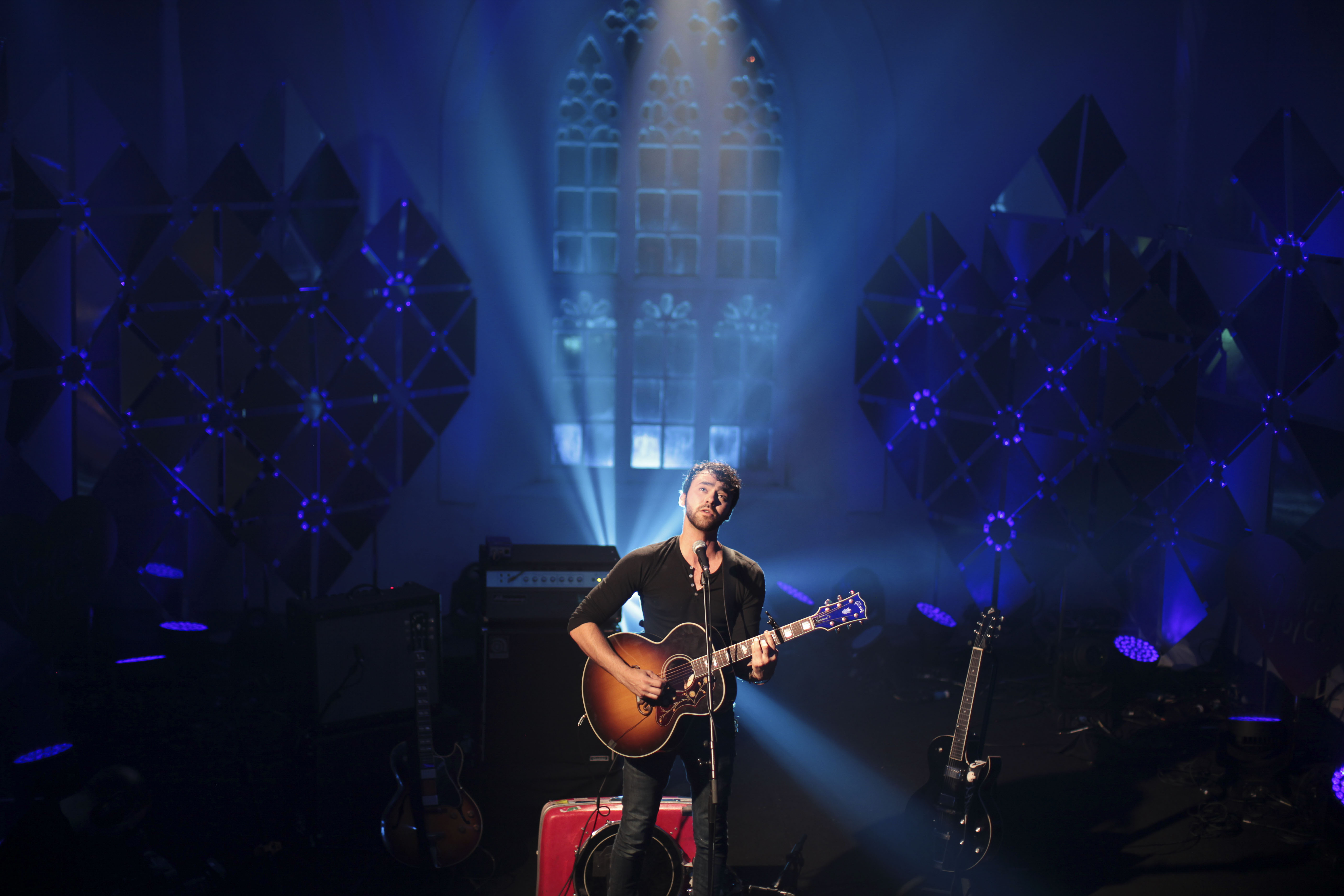 On a dark and stormy day, in the middle of winter last year, Shakey Graves made the long haul journey from Austin, Texas to the remote fishing village of Dingle on Ireland’s Wild Atlantic Way to perform in the tiny, two hundred year old church of St. James’, where Ireland’s premier music TV show Other Voices is filmed.

Shakey Graves followed in the footsteps of Ryan Adams, Amy Winehouse, Hozier and The National, who all made the journey, now known as a musical pilgrimage and said to be a tonic for the mind and the soul. For the last fifteen years artists have flocked to Other Voices to perform, to slow down and escape from the hullabaloo of the music world in a remote and beautiful corner of the world, right on the edge of the Atlantic.

In the midst of December 2015, as a storm raged outside, Shakey Graves took to the stage, bringing a little bit of Austin flavour to the West of Ireland. A friendship was formed that weekend, and this week, as Other Voices takes place in Austin’s legendary Arlyn Studios for the first time, Shakey Graves will assume a new role as presenter of the show with BBC Radio 1’s Huw Stephens and May Kay. To celebrate – we have an interview with Shakey Graves and an exclusive video of ‘The Donor Blues’ in St. James’ Church. Enjoy!

What did you think of Dingle and your time in Ireland?

Unfortunately I didn’t get to stay as long as I wanted, which was kind of like forever. Dingle is an excruciatingly charming place and my small time in Dingle was very important to me. It was the first time I went over the pond at all and it kind of became an idyllic situation. Not to go to Dublin but go to ‘Ireland, Ireland.’ It kind of fulfilled everything I thought it was going to be. It was magical and stormy. There was a red alert or something. It’s so hot in Texas, I love the gloomy, grey and green. The back drop was incredible.

What about Other Voices and St. James’ Church?

I thought St. James’ was incredible. The first time I actually saw Other Voices it was on an airplane. The Hozier episode was playing somewhere. I was already privy to it in some way but it made the church look huge. I thought the whole thing was really magical. My jaw was on the floor and the Irish hospitality - that I didn’t even know was a thing - was in full force.

The whole experience of Other Voices feels as special as it could be. Dingle is such a character in the show and while I feel like that might be difficult to replicate in some other areas, Austin seems like the right fit.

Were you aware of the longstanding connection between Irish and American music when you were growing up?

Somewhat - it wasn’t entirely invisible or anything like that. I think a lot of it comes from the storytelling traditions that are shared between the two cultures. The singer-songwriter, guitar picking... some of the more true music that comes out of Texas has a lot in common with Irish folk music. The lyrical painting of scenarios - in Ireland it’s the sweeping green and the ocean and here it’s the endless plains and rivers.

In more recent times I’ve fallen head over heels for Lisa Hannigan but I guess that’s not hard that's just what she does. I saw her play in Canada once and it ruined my friends and I for life. It was a reverse gender Elvis performance. There were all these confused men surrounding the stage wondering who this angel was.

Where in Austin would you recommend to someone who hasn’t been there before?

Well I guess I would start by going classic….things that aren’t really an option in Ireland like Barton Springs Pool which is a big tourist destination – a go to spot. It’s like a football field sized naturally formed spring fed pool. There are fish in it and stuff and it stays at like 86 degrees. The weather doesn’t change here ‘til the end of October.

You also have to eat actual Mexican food of course.

I would recommend going to the White Horse. It’s a contemporary Honky Tonk bar. It’s not what we call ‘a shit ticker bar’ around here. It’s the hipper version of the old dance hall type feel. You can get swung around by some gentlemen if you want.

How was the European tour?

It was incredible. It was almost no days off and shows every day. I hadn’t played solo shows in so long. It takes a lot of energy to play for an hour and half by yourself and hold people’s attention. I was a little worried going into the european tour, it was just me for the first half and then I was joined by my drummer and co-creator. It was my first time out in Europe – playing to crowds that don’t speak my language.

It went great. It was incredible. It was like forgetting that you know how to fly or something.

I love being on stage and playing little excitable bars. The rooms were small because they didn’t really know what to expect. A lot were like small, 200-250 rooms. They were some of my favourite places to play – that’s where I shine. I was like a fish in water shouting ‘lets do this!’. For me it’s really either or. I love tiny rooms and almost even more love gigantic stadiums. A little bitty room or the biggest room of all time.

What’s the best show you have seen in a stadium?

Bruce Springsteen. It was too fun – I always wanted to play stadiums because of people like Bruce. I got to do it recently with Jason Isbell. We’ve played stadiums but always for other bands.

What does the term Americana mean to you?

Very little. Yeah. I mean what Americana means to me is sort of the lack of definition for new music that’s based on old music. I don’t feel like it is very apt. Americana is sort of the trashy mass produced fake old Coca Cola signs and 1950s nostalgia. I have won an Americana award and it’s nothing to sneeze at, it’s the only award I’ve won at that scale but I wouldn’t say that I play Americana… at the same time I don’t play straight Rock N’ Roll. Arguably someone like Hozier could be labelled as Americana if he was born here. I think it has more to do with the aesthetic than the content. ‘Cos I wear cowboy boots and talk about Texas a lot.

We love the album ‘And Then The War Came’. Where did you make it?

I recorded the album in my house.

Do you have a studio there?

I sort of built one for this, we turned the house into the studio.

Tell us a little bit about The Donor Blues.

Yeah that song was a collaboration with a friend of mine who was in New York. He had written a guitar part that had different lyrics. He gave me implicit directions to do whatever I wanted to do with it. I chopped it out of the form that it was in. It was pointedly written about the fact that my identity is built around the places I’ve visited and the travels I’ve experienced. The concept of The Donor Blues is whether you leave a little bit of yourself there or you take a bit and often it’s a compositive of a lot of different influences. I learned how to stand my ground in New York. I found my voice in California, what my family is in Texas and who Fungie is in Dingle.

Where did you meet Esme?

I met Esme on one of the first tours I ever went on. We were both the opening acts in like 2012/ 2013. We wrote all those songs that are on the album that we do together. I think the last one we wrote was Big Time Nashville Star. We usually see eye to eye.

What is your favourite song on the album to perform?

Shakey Graves - If Not For You