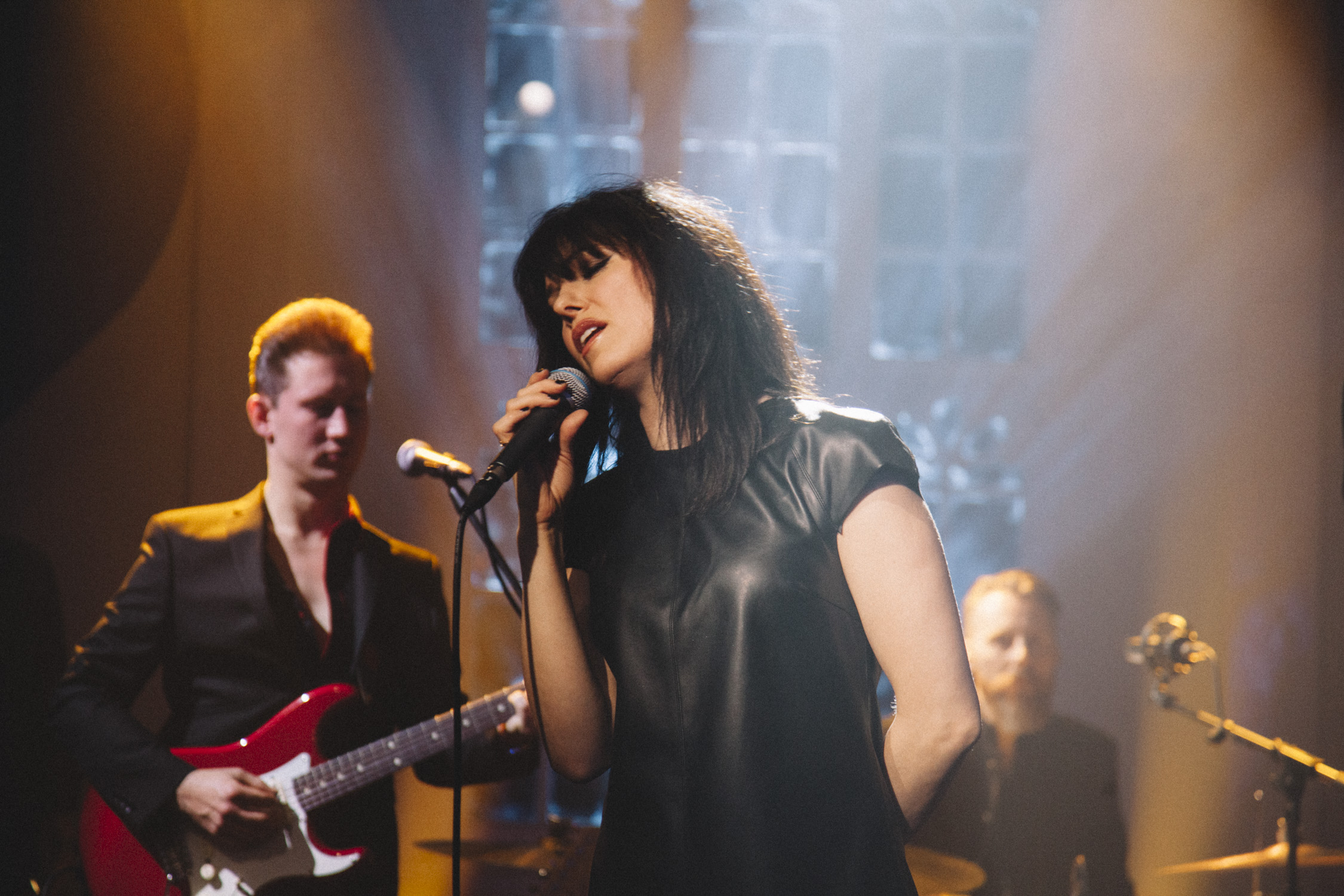 Imelda May spoke to Anna Job about her beginnings in music, playing at Other Voices and her highly anticipated new album Life Love Flesh Blood.

On a crisp, cold Saturday in December, Imelda May and her band arrived in the tiny fishing village of Dingle to perform at the fifteenth Other Voices. You would be forgiven for not recognising Imelda around the town; the days of slick-back roller curls, Big Bad Handsome Men and rockabilly are out of sight. It’s three years since the release of her last studio album ‘Tribal’ and Imelda has returned to sing the blues.

The new album ‘Life. Love. Flesh. Blood’ marks a significant change for the Dublin born singer and a return to the musical palate of her early days. “I started singing blues in Dublin. I ended up in a blues club because my sister and brother in law were going to this place and I begged them to take me. I met great Irish musicians there.”

Sonically, the new direction is a step towards old school blues and jazz. A throwback to big, sultry, heart-wrenching classics such as Etta James’ ‘I’d Rather Go Blind’ or Julie London’s take on ‘Cry Me A River’. Lyrically, there’s a rawness and honesty that we haven’t heard from Imelda before.

Last year she flew to LA to work with legendary producer and musician T. Bone Burnett [Bob Dylan, Elton John]. His involvement was a crucial piece of the puzzle and helped forge the sound of the new record. “I sent him demos – some of the worst demos of me playing guitar badly and singing. [chuckles] I met with T. Bone quite a lot and he knew exactly what musicians he wanted on it. We discussed the sound and the direction.”

The collaboration pulled Imelda out of her comfort zone she explains “I used his band which is normal for him but that was a big change for me. I wanted to use my band but I was willing to try his way because of how badly I wanted to work with him”.

“We met the band the day of recording. We hadn’t rehearsed or anything we just went in and recorded fifteen songs in seven days. It just clicked and we worked it out as we started each song to get the right vibe. Not over playing either. Once it was in the right direction we’d just go for it and not do too many takes.”

Black Tears, a magnificent, fragile tale of heartache is a standout track from the new album. There is a gut churning contrast between the soft, crestfallen, smoky vocals versus the exasperated “Where did it all go wrong?”. The track was singled out for Jools Holland’s Annual Hootenanny at the request of the show’s producers.

“I was going to perform a different one. They listened to the album and they said they wanted Black Tears. Jools actually performed on the album and he did a great job so I presumed he’d want that one, but they said absolutely not. One of the trumpet players did the most beautiful arrangements and I was really glad to do it. It was a good moment and a nice way to begin the New Year.”

However, for Imelda, it hasn’t always been big New Years Eve shows at the BBC. She tells a story of walking the streets of Dublin with friend and bass player Simon Farrell, asking record stores to sell her album. “We had a big bag of CDs and we begged every shop to sell them. Everyone said no bar that little one around the side of Georges Street Arcade [Spindizzy Records] – and that’s not even that long ago. I’ve had a lot of friends help me out”

Imelda has always demonstrated passion, determination and a hard work ethic to survive in the music industry. She moved to England many moons ago in search of more performance opportunities and outlets for her music.

“The music in Dublin is better than anywhere the bands are fabulous but you can just get a bit laxidazical when you just play with your friends because it’s really just nice but then you go away and you don’t know anyone and you have to start up again.”

For years Imelda juggled multiple jobs to pay the bills she eventually reached a point where she thought “it’s now or never and left every type of money that I was earning”. She quit the swing band she had been part of, stopped singing at functions and started up her own group.

“It was tough financially. I had less than I had before - I didn’t even have a penny. It was good and I needed to do it creatively. I was just so bored of functions and trying to scramble money. My brain was flying and there was loads of creativity around. I was living for every rehearsal and absolutely loving it.”

Having taken this risk things started to pay off; footfall at her performances increased and where she had previously been selling her own merchandise, booking and promoting gigs, she now enlisted the help of an agent. Around this period she played a gig at a jazz venue in Sheffield, where one of the audience members worked for Jools Holland. Soon after she was invited to perform on the TV show and as with many acts, the appearance on the BBC’s flagship music series catapulted Imelda into a different league. The years of disciplined work paid off.

At the root of all this dedication is a woman who’s drive is fuelled by a great love of music, poetry and the arts. She lists Leonard Cohen as a big influence lyrically. “I’m a big fan of Kate Tempest. I’ve always listened to all kinds of music. I’m crazy about John Grant. I love Blake Mills. I think he’s phenomenal and PJ Harvey. Patti Smith.” Imelda cites Tate Modern as her favourite gallery along with “a little one on Francis Street in Dublin. I love modern art. I studied art as a teenager and let it fall away as you do but I’m getting to see art galleries.”

It’s a busy time for Imelda; she is preparing the album for release, rehearsing for an upcoming tour and spending time with her four year old daughter – “We’re doing acrobatics every morning at breakfast”. Tight schedules mean Imelda didn’t get to spend as much time in Dingle as she would have liked.

“One of my big regrets is each time I go [to Other Voices] I just really, really want to spend time there. I did get enough time to have dinner and soak up the vibes. It’s fabulous. It does seem to be getting much bigger now – more of festival vibe. The first year I did it it was quite quiet, just a few people turning up to the gigs and this year it was absolutely hopping. It’s a musicians’ festival. You get a lot of people wanting to check out other bands, a gorgeous festival.”

You can catch Imelda May’s Other Voices performance on RTE 2 on Thursday 2nd of February. Repeated on Saturday 4th at 00:30 and on the RTE Player.