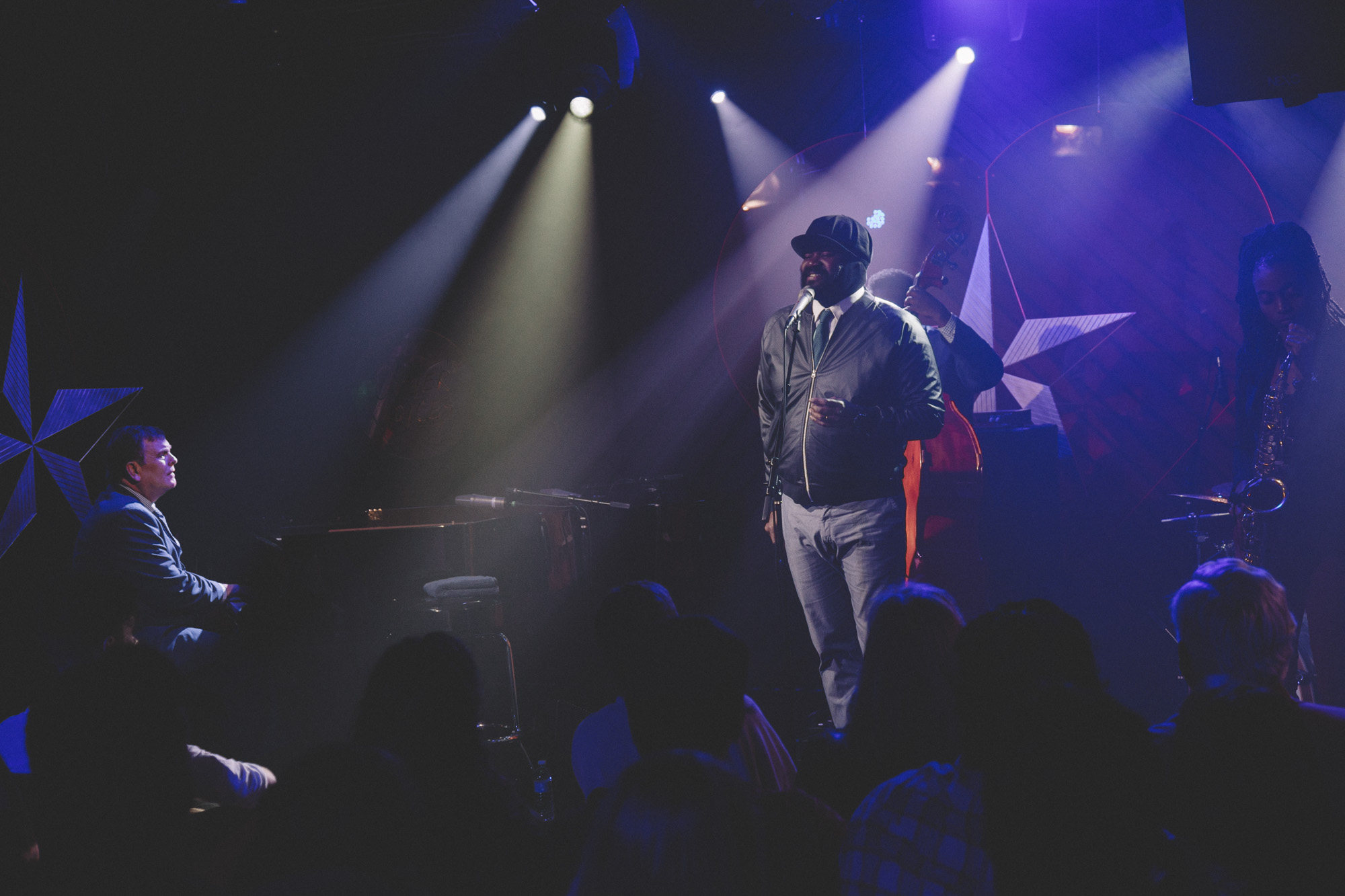 “That’s where I learned to sing”.

Gregory Porter and his band arrived in Arlyn Studios last October for the second day of Other Voices’ first excursion to Austin, Texas. State of the art recording equipment, oriental rugs and old gig posters fill the atmospheric space, which became the base for Other Voices’ US adventure to the deep south. As the smooth opening piano chords of ‘Holding On’ rippled through the studio, it quickly became apparent that attendees were about to witness something exceptional.

Since the release of his Grammy nominated debut album ‘Water’ in 2010, Gregory has become internationally recognised for his warm, distinctive baritone voice and music which fuses elements of jazz, gospel, swing and soul. He and his band draw in enthusiastic audiences around the globe – apparently even selling more records than Beyoncé in Germany.

Gregory’s musical journey began in Bakersfield California, where the development of his musical taste was influenced greatly by his mother.

‘She loved classic music. Beautiful music. The first foundations of music I was hearing was gospel coming from my mother’s records and from live music that I was hearing in small churches in California’

From a young age, Gregory was exposed to the greats; Nat King Cole, Sarah Vaughan and Ella Fitzgerald were firm fixtures on his mother’s record player. ‘"She also was mostly into gospel. James Cleveland, Mississippi Mass Choir and Mahalia Jackson." Arguably the best singing teachers from which a young man could learn.

While music always played a large role in Gregory’s life, there was a period where he took a different path. Following his graduation from high school, he was awarded a scholarship to play football in San Diego State University. A shoulder injury put an early end to his burgeoning career in athletics and it was around this time that he began to consider a life in music seriously.

“The change of identity from athlete to football player to singer was natural because music was always something that I had. Music was always a part of me - I always considered myself a singer.”

From his early teens Gregory was writing lines of melody and poetry but "without a career and an idea or someone telling you it had value you just throw it away. I would say lyrics into the air or on a piece of paper and it was gone, lost. I had that for quite some time."

Luckily this ephemeral way of song writing didn’t continue. Gregory met Kamau Kenyatta in UCSD who quickly became a mentor and encouraged him to come to a recording session with Hubert Laws where they were working on new arrangements of the music of Nat King Cole. The result? Gregory was asked to lend his voice to the album and recorded a beautiful rendition of Smile.

The first music Gregory wrote in a formal capacity was for a musical ‘Nat King Cole and Me’, which addressed the absence of his father. From this point Gregory realised he could draw on personal experiences for inspiration and began to immerse himself in life as a professional songwriter. This, coupled with a move to New York City under the guidance of his brother, were transformative factors early in his career.

"I would say that Harlem and Brooklyn really helped to highlight some of the things I already had in me from some of the small churches that I worshiped in as a child in California.’"

Encouraged by his brother, Gregory was "told to sing in small jazz clubs in Brooklyn & Harlem. People were excited about this kind of vague, small church sound I had that was probably coming out of Texas, Louisiana, Arkansas. Places where my family, my aunts and uncles were coming from. It took Brooklyn and Harlem in order for me to appreciate my roots a bit more."

It was in St. Nick’s Pub in Harlem where Gregory first met core members of his band who have been essential in forming his sound. "We all just kind of magically congregated in this little, small jazz club. It was Chip (piano) who I vibed with the best and Emmanuel - I always felt best with his drumming. I have full confidence in my musicians that they’ll bring to fruition what it is that I need in a song and that they’ll also have room to flex their musical DNA."

The small jazz club, which is now defunct, was on 129th street – "a black dive bar is the best way that I would describe it" says Porter. The venue also happened to have an international audience from time to time, which sparked his desire to persue an international touring career. Music fans from Japan, Italy and Germany would ask when Gregory’s next international tour was - at the time he didn’t even have travel documents. “So I thought lemme get a passport.” [chuckles]

New York proved to be an inspiring and formative setting for Gregory in many ways. He notes that when players he admired started giving him nods of approval it gave him confidence to continue.

"When I would go and listen to some of the great vocalists and piano players of any great style they would give me a wink and say what it was that I was doing. It’s better than a university master class or education because it’s the founders of the music saying ‘Yeah, you’re moving in the right direction young man’.”

This influence is reflected in ‘On My Way to Harlem’, where the percussion and the sax introduction perfectly evoke the familiar sense of semi-chaotic movement through the busy streets of NYC, where the legacy of great musicians hangs in the air. The song name-checks legendary artists such as Marvin Gaye, Duke Ellington and Langston Hughes.

Since his early days in NYC, Gregory Porter’s career has snowballed. Reports of his mesmerising live show and commanding stage presence spread like wildfire throughout the music world and fans have flocked to performances in droves. Porter and his band have maintained the skill of being able to create an intimate stage presence and can evoke the essence of the New York Jazz scene in venues the world over. This is exactly what happened in Arlyn Studios, where for forty minutes it was as if the audience were transported into a smoky, dark jazz venue.

'Holding On', the aforementioned the opening track of Gregory’s set at Other Voices, was originally written with UK dance duo Disclosure.

“We sat next to the piano and we said let’s come up with something. I approached it not as a dance song I said ‘let’s write a song and turn It into a dance song’. That way it’ll be a song and not just some oohs and ahhs that we put a dance beat to.”

The collaboration followed in the footsteps of Claptone’s excellent Liquid Spirit remix and offered Gregory an opportunity to flex his musical muscles, showing off his versatility as a performer. ‘Holding On’ reached the top of the US Dance Club Chart and saw him make journeys to Disclosure’s Wild Life festival and Ibiza - “This is a church of a different kind!” he proclaimed.

While ‘Holding On’ was originally released and expressed as a dance floor anthem, Gregory decided to stick to his guns and bring the song to his jazz combo, so they could do their own version. Whether the song is communicated as a dance track or a blues and soul classic, it covers a recurring theme in Gregory’s work, of irrepressible love.

“No matter what we do, whether it be the unnatural hand of man, distance, whether it be time whatever it is that tries to get in the way, love has the ability to rise above it all no matter what gets in the way. You try to break it you try to shake it. There ain’t no breaking love. Love has a mind of it’s own. It’s irrational and it keeps going. That’s basically what I was trying to say.”

In his work, Gregory deals with the wide array of emotions connected to love. 'Take Me To The Alley', the title track from his third studio album is a song influenced by his mother, in particular her kindness and generosity to people of all walks of life. The alley is a metaphor which refers to a street in Bakersfield, California called Skid Row where destitute people reside. “That’s where I learned to sing”. Gregory explained. His mother would bring food and a public microphone system with her to Skid Row and sing to people.

“That’s where she wanted to be. She said take me to the alley, the lonely ones. Don’t give a plate of food to someone who’s full and has a pocket full of money. It’s a song about the energy that my mother put in. I’m not a saint but it’s the message of my mother who was”.

Gregory did this with his mother from the ages of eight to ten upwards. She continued to do this until she passed away and her outlook on life had a profound influence on the singer.

“She was always a place where people could come get soup or a plate of food – that’s what she did. She gave things away. She informed a lot of the messages in my songs. I think that’s the proudest thing about my career.”

The kind, generous nature of his mother has had a lasting impact on Porter. In the recent documentary Don’t Forget The Music – Porter is adamant that even with 250+ gigs a year he is still not working as hard as his mother who raised eight children and kept two jobs. The strong work ethic and drive has not only kept his head above water over the years but propelled him to the top of the industry.

What we witnessed in Arlyn Studios was an artist at the top of his game and a band comprised of phenomenal musicians, all exuding tremendous skill and talent. Magic. Mark our words - Gregory is an artist who will be around for years to come.