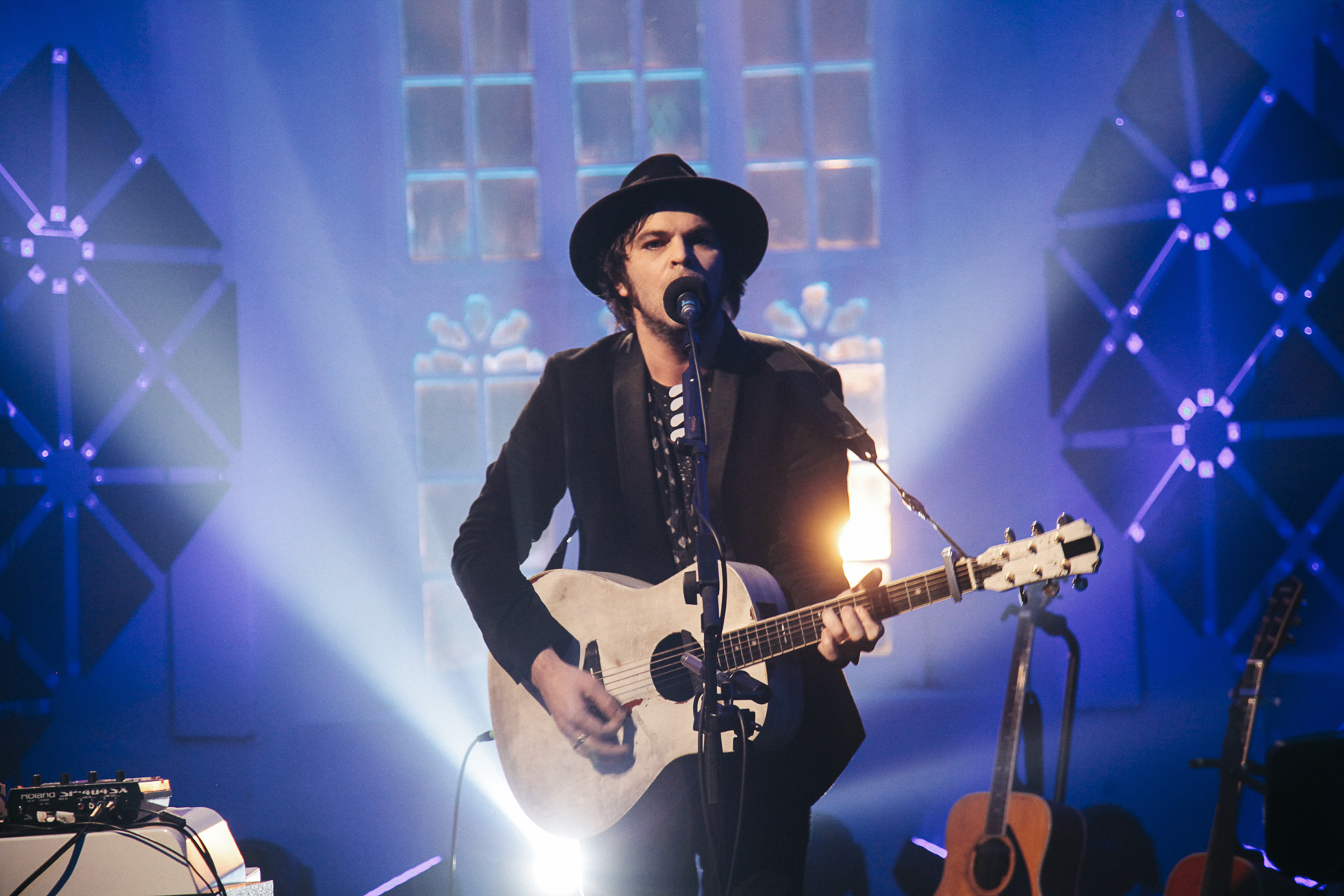 Last December, Storm Desmond wreaked havoc across the country’s coastline with frightening gale force winds and torrential rainfall. At exactly this time, musicians from around the world were travelling by plane, train and automobile to reach the small town of Dingle on Ireland’s aptly named Wild Atlantic Way, to take part in the fourteenth series of Other Voices.

Despite advice from a now infamous weather report on RTE, Gaz Coombes (formerly of Supergrass) was one of the artists who braved treacherous roads and made the long pilgrimage to Dingle by van. A necessary journey some would say.

"It was a great little adventure, driving around in a van. It wasn’t glamourous, it was all very raw and wonderful. It was a lot of fun going through Cork, Galway, Dublin and of course Dingle. I kind of went on tour by accident.” Gaz explains.

Fast forward a month and we’re on the phone to Gaz, reminiscing about the Other Voices weekend. “It’s an absolutely great vibe. We just wandered around. Everyone was so welcoming. Great food as well. That was amazing.”

“Yeah. [laughs] A solid diet, especially before the performance. There was a very special atmosphere that night before the show.”

Gaz’s arrival in Dingle marked the end of an impromptu solo series of Irish gigs to test out material from his critically acclaimed second album ‘Matador’. On this mini tour he decided to go it alone, digging out various synths, keys, loop pedals and guitars for a one man showcase. The result was a spectacular, spellbinding show illustrating Gaz’s musical abilities and years of experience. Luckily for us, this was the show he decided to bring to St. James’ Church.

The Mercury nominated album ‘Matator’ first began to take shape in Gaz’s home studio, a process he describes as a “sort of instinctive”. Buffalo, the album’s opening track, sets the tone for the record, which is bold, dramatic and rises to expectations. “It was all about finding ideas. I’d start off with a beat. Buffalo became the seed of the album and the sonic template for what I wanted to get across.”

Throughout ‘Matador’, Gaz’s distinguished vocals soar, weaving in and out of the instrumentation until the two become inseparable, creating magnificent, psychedelic swells arriving at just the right points.

We’re no longer dealing with the cheeky “we are young, we are free” days of Supergrass, yet in typical Coombes fashion, mischievous subtleties are scattered throughout the album. The intro of 20/20 is riddled with enchanting synths, to the point where it could almost be placed on an Alice in Wonderland soundtrack. “3,6,9 the goose drank wine” he croons over an agitated rhythm and somewhat anxious, yo-yo synths in The English Ruse.

Gaz Coombes | The Girl Who Fell To Earth | 30 Second Clip

Moments of warmth follow suit with The Girl Who Fell to Earth and Seven Walls. When it came to assembling the latter, Gaz’s writers block was eased by his wife Jools, who stepped up to the mark with lyrics that put the cogs back in motion.

“She came up with a couple of cracking lines. I wanted to kind of get across that moment when I remember being 16 hanging out in a concrete car park with a can. It was the rawness of the moment that was very real. I wanted to tap into that sort of vibe and it just went from there really. The dynamics are what I was interested in. Instead of big pop chords I wanted to leave it hanging in one sort of mood.”

The hanging mood Gaz refers to is enhanced by the clarity in the recording. Each instrument and sound is recorded with a distinct sharpness and given space to breathe.

“I borrowed a microphone from my friend. An E47. I’ve got some good bits and pieces but this is the holy grail of microphones and I was lucky to have that for a time. I kind of thought I better make the most of it. It just has this air to it and has this quality with whatever instrument you put it in front of… I’m getting a bit nerdy now.” [laughs]

The nerdy chatter continues with reference to the keys / synth combination he used for the memorable performance of Seven Walls in St. James’. “That’s the Waldorf Zannenborg – it’s like a Bond villain or something. It’s wicked. It’s a great sample of a piano with a great wurlitzer sound in there too. It’s a very cool instrument."

Since his days in Supergrass, Gaz’s passion for music technology and his search for unique sounds have taken him all over the world. After recording 'Diamond Hoo Ha' in Berlin’s Hansa Tonstudio in 2008, Supergrass have become part of the studio’s legendary history, alongside artists such as David Bowie, U2, Iggy Pop and Depeche Mode.

“Yeah, it was pretty awesome. We spent two or three four week periods there. That was really cool renting apartments in different areas. We’d get the train in and walk in the mornings. Berlin’s got a kind of openness about it that I just really enjoyed. Then you walk into Hansa and it’s got this incredible history. All these records have been made there. It’s a shame that recording studios aren’t as needed as they once where. It’s wicked.”

There’s something distinctly old school about Gaz Coombes. As someone who was raised on a musical diet of Patti Smith, JJ Cale, Blondie, The Smiths and many more, rock and roll has been pumping through Gaz’s blood since he was ten or eleven. With Matador all the right ingredients seem to have been in place to create something timeless. In some instances the album nods to Lennon’s solo work and Pink Floyd, yet as with all great albums, it’s got its own distinctive, memorable sound.

So, what’s next for Gaz Coombes?

I’m getting ready to do some rehearsing for a gig in London (The Roundhouse) that I’ve got. It’s a slightly different show. It’s really exciting getting that together and trying some new ideas. I’m writing too, putting a few new things together. It’s all go.

Indeed it is. In March, Coombes will also travel to the U.S to launch 'Matador' across the pond and commence a stateside tour. However, before all that, Gaz’s goosebump-inducing performance in St. James’ Church will appear on Other Voices on Saturday 23rd of January on RTÉ 2. Don’t miss this one.

Other Voices returns to RTÉ 2 this Saturday at 11:15PM