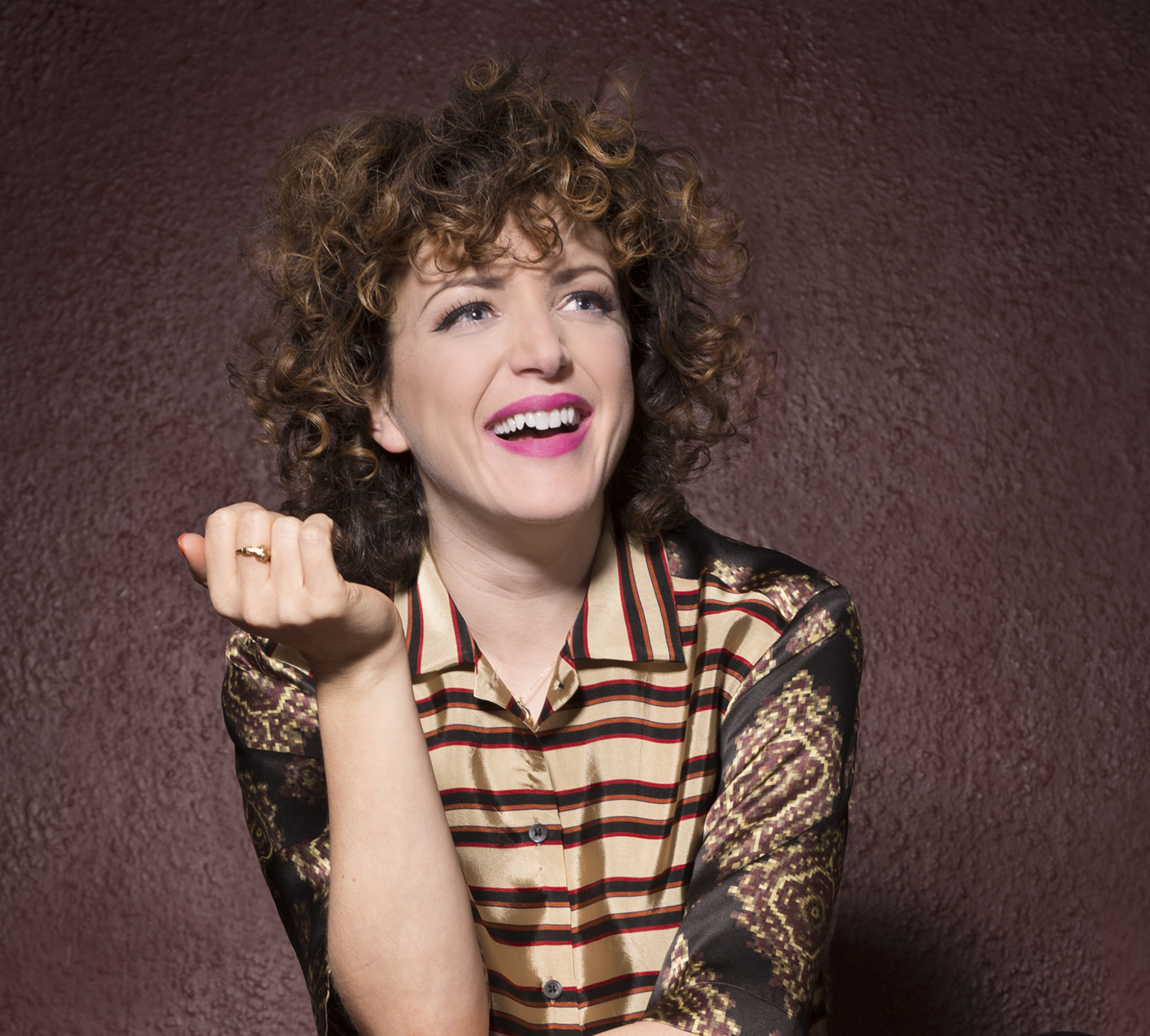 Return of the Mac

On a crisp, cold Saturday morning in January, Annie Mac skips through the doors of Benner’s Hotel on the Main Street in Dingle. She is fresh-faced and chirpy despite a 6AM flight from London and greets old friends with an infectious sense of warmth and excitement. Annie is back in town for the first time in four years to resume her role as presenter of Other Voices.

Over the next two days Annie Mac, Huw Stephens, May Kay and a camera crew run around Dingle, shooting the final links for the fourteenth series of the show. Phones are out to capture the beautiful corners of the town and the shoot is heavily documented through Annie’s popular Snapchat account.

'I have beautiful memories of travelling around the coast doing links in the most picturesque and breath taking places…and of course [favourite memories include] the slagging I get from the camera crew. I wouldn’t have it any other way. Ha.'

Over the last decade, Annie Mac has become known for having a finger on the pulse of the booming international dance music scene and she is renowned for being the first to break some of today’s biggest artists on the global stage.

'This is where it begins' lauds the jingle of her daily BBC Radio 1 show and for many artists this could not be a truer statement. The placement of a track on Annie’s show can dramatically change the direction of a musician’s career. Just ask Disclosure, Duke Dumont or Lapsley.

However, Annie not only champions new musicians and dance music, established artists flock to her 7-9PM slot to showcase their latest offerings in the hope of a new release being crowned the ‘Hottest Record in The World’. The Annie Mac stamp of approval is a coveted one.

Easygoing and lighthearted, beloved of artists and listeners, Annie’s interviews with musicians such as Kendrick Lamar have matched and raised the bar set by her highly regarded predecessor, Zane Lowe. Her approachable, playful demeanour makes for entertaining, open conversations putting even the shyest, most cautious musicians at ease. Don’t believe it? Listen to Hozier:

'Annie Mac is always such a welcome sight in a radio studio or backstage at a festival. There’s a mischievous sense of fun to her at all times and she’s as open, candid and fun loving as she is engaged and informed… When you’re in tatters on the road, having someone like Annie greet you – whether for an interview or just a chat and a drink is a wonderful thing.' - Hozier

So, how exactly has this Dublin born Radio presenter and DJ climbed to the top of the UK’s national broadcaster and won over the hearts of ravers and radio listeners around the world?

Let’s start at the very beginning. A very good place to start, as a wise nun once said. After finishing her Leaving Certificate exams in Dublin, Annie’s application to study Theatre in Trinity College Dublin was rejected. Instead, she moved to Belfast to study English Literature in Queens and it was here that she received an informal but important education in electronic music and dance culture.

A Masters in Radio followed and upon completion of this course, she moved to London. In short order there followed: a period in the Guardian, a show on Net FM ‘aimed at men in their 30s’, time at SBN, where she produced a hip hop show and a stint as a DJ at Underworld in Camden. The DJ set here wasn’t quite the beat matching that you’d find at an Annie Mac Presents show [AMP], however it definitely versed Annie in the ability to read and work a crowd. 'You would play everything because people just walk in off the street. You’d play Dizzy Rascal and then Guns N’ Roses next' she explains.

With this experience under her belt, Annie began working in the BBC on a temporary basis.

'I was kind of knocking on the door of Radio 1 for a while. I had met with them a few times. My boss Pam knew how much I wanted to do it. I’d interview bands on my lunchtime in Camden and come back. At that time the job of being a Broadcast Assistant came up on Steve Lamacq’s show.'

Over the next two years Annie worked for three different DJs at the BBC - Zane Lowe, Steve Lamacq and Colin Murray. The latter ‘just wanted to shock people and get me involved on air’. The three broadcasters had different presentation styles and the exposure was formative.

'Zane Lowe was really musical. Even in the way he broadcast… he used the radio desk like an instrument and used reverb on air. He was the first person to stand up when he was broadcasting.'

Next up was her own show with fellow BBC Radio 1 host, Nick Grimshaw, and slowly but surely, Annie shed the title of broadcast assistant, morphing into a household name in her own right. At this point in her career, the folks at Other Voices’ HQ began to sit up and take notice of this young Irish presenter who was making waves across the pond.

'Music took Annie on an expedition from Dublin to Belfast to London. Sitting in Dingle we heard her calling out from London on the radio. We loved her voice and her enthusiasm for music. I called her and we arranged to meet in Gruel on Dame Street. She arrived … big hair, full of voltage and here we are.' recalls Other Voices founder, Philip King.

Fast forward from Gruel on Dublin’s Dame Street to Dingle and Annie came on board to join presenter John Kelly. She thrived on the opportunity to showcase her broad range of musical knowledge.

‘I remember coming in and feeling so happy to be working in Ireland with Irish people’.

Annie continued to host the show for two years with John Kelly and Game of Thrones actor, Aidan Gillen. Insightful, upbeat interviews with artists such as James Vincent McMorrow, The National, The XX and Ellie Goulding followed. She cites interviewing Jarvis Cocker and Richard Hawley together as a ‘terrifying and gratifying’ moment.

'For me it was so exciting because I wasn’t just about electronic music and for someone to ask me to be involved was like ‘Praise the Lord!'

Annie speaks fondly of her time with Other Voices especially the gigs in St. James’ Church. ‘I’ve been really lucky to see some incredible performances. The Hawley and Jarvis Cocker duet was really special. Also, The National - I didn’t really understand them that much until I saw them in the church'

By 2010, Annie’s work calendar started to fill up months in advance with DJ bookings, commitments to the BBC and her own AMP gigs. A longstanding promise of an Australian tour meant she was unavailable for Other Voices in 2011.

Since then, Annie took over from Zane Lowe as host of BBC Radio 1’s flagship daily music show; she launched her own festival ‘Lost and Found' and expanded her company Annie Mac Presents. On a personal note, she also became a mother. She is busier than ever.

Annie Mac Presents [AMP] has developed rapidly. It is a vibrant, exciting clubbing brand in its own right, with tours, sought after merchandise and an extensive following on social media. No one had quite anticipated how strong Annie’s following would become. One evening over a quiet hot drink in the small front lounge of Kennedy’s in Dingle, a joyous young lad came bounding through the door, beaming from head to toe and wearing one of the AMP T-shirts. As it so happened, one of Annie Mac’s biggest fans was in Dingle and once she took to Snapchat, he started receiving texts from his friends informing him that Annie was running around the town. It was no surprise that he ended up being featured on Annie’s Snapchat. ‘I love Snapchat’ she says. ‘I love the creativity on it and the spontaneity’.

With Annie Mac, what you see is what you get and this is a huge part of her appeal. There is no air of VIP status or celebrity. She is enjoying the journey and excited to share it with her fans and music aficionados alike. This is also part of the reason AMP tours are instant sell outs. They are reminiscent of big house parties with bangin’ tunes.

It is always worth keeping an eye out for the homecoming AMP gigs in Dublin. 'The last one at Christmas in Dublin was wild. The crowds there are unparalleled.' She also mentions that time with her family and returning to her childhood bed at the end of a gig are amongst the best things about playing gigs in Dublin.

In a few days, Annie returns to our fair isle to play Longitude Festival in Marlay Park. Who will she see? 'I want to catch Kendrick Lamar and Major Lazer - I’m making a documentary for the BBC so will be chatting to some of them as well'.

In terms of Irish musicians, she’s particularly enthusiastic about Rejjie Snow at the moment, stating he’s 'got what it takes' and she’s equally excited about the return of James Vincent McMorrow. 'He has worked with 1985 (producer of Hotline Bling and Hold On We’re Going Home for Drake) and Two Inch Punch on the record and it’s sounding amazing.'

One might think that with such a gruelling schedule some aspects of the job might become tiresome but when asked about her least favourite elements of her work, she firmly bats that question aside.

‘Genuinely nothing. All I ever wanted was to be on radio. Djing can be gruelling when you’re very busy with radio but I’ve cut down a lot and life is easier for it. I get to spread good music around the world, provide people with joy, wonder and escapism through the medium of music – what’s not to love?’

What’s not to love indeed.

Annie Mac presents the Other Voices Gavin James Special on RTE 2 this Saturday 16th of July and plays Longitude Festival in Marlay Park this weekend.