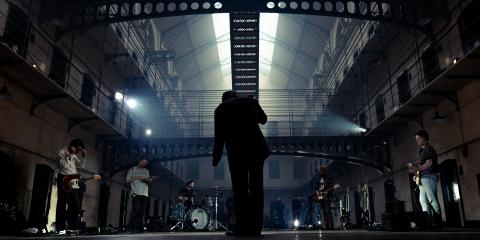 We’re so excited to share that Fontaines D.C. will release their phenomenal Courage performance from Kilmainham Gaol as a limited edition LP for Record Store Day 2021.

It was an absolute privilege to have Fontaines D.C. play Kilmainham Gaol for us last year as part of Courage and we’re so honoured the band have chosen to release this special set for their first ever Record Store Day release! We know this performance meant a lot to Other Voices and Fontaines D.C. fans so it's amazing to know that it will live on on record players for years to come.

The release arrives on 180g heavyweight black LP in a gatefold jacket and includes an exclusive poster.

Dublin historian Donal Fallon has written an essay on the significance of Kilmainham Gaol, which features on the back cover. As he so eloquently writes:

"It is an old cliche for historians to ask ‘if these walls could speak, what would they tell us?’ Fortunately, the walls of Kilmainham Gaol tell us exactly how they feel. Faded with time, but still stubbornly there, are the messages of Ireland’s revolutionary generations. Over one door are the quoted words of Patrick H. Pearse, poet and leader of the Easter Rising, thundering ‘Beware of the Risen People.’ Perhaps the most evocative piece of graffiti in the prison reads simply ‘A Few Men Faithful and a Deathless Dream.’"

Talking about their Courage performance Other Voices Founder Philip King, said: On July 14th last a remarkable gig took place behind the walls of Kilmainham  at the height of lockdown as part of the Other Voices Courage series..On That evening Fontaines D.C. played music from their about to be released “A Heroes Death" Grian Chatten ,says  the album's name was inspired by a line from Brendan Bethan's play the hostage.."“If we give ourselves every breath, We are all in the running for a Heroes Death” The Jail was the perfect  location for this heroic  music, echoing it turbulent past with energy and passion.It was a unique and inspiring performance