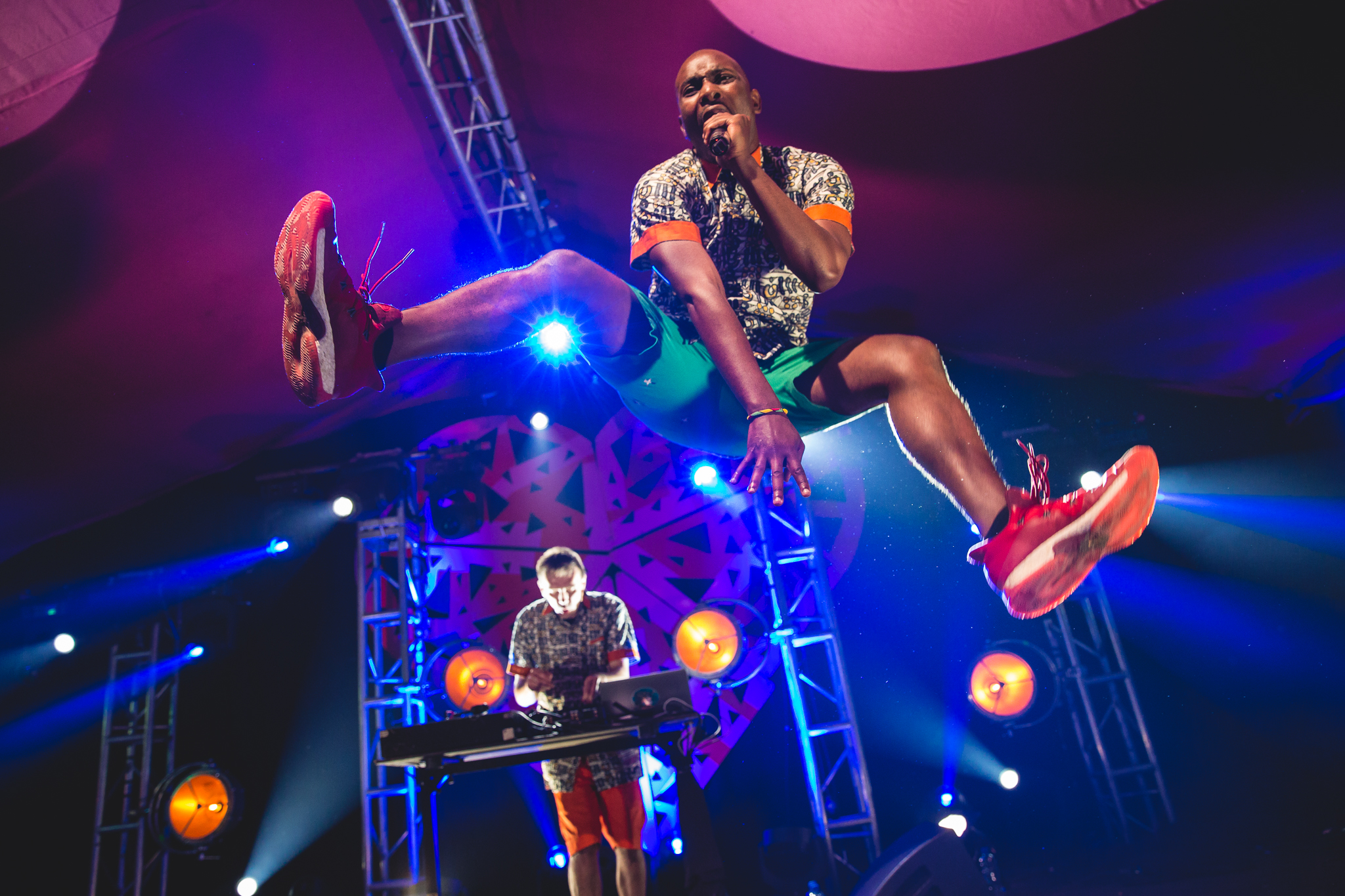 Day two at Electric Picnic, featuring soulful pop, powerhouse rock, high-energy hip-hop and a whole lot of rain (but we won't foucs on that...)

Slow Riot - 13.50
If you still needed waking up on Saturday afternoon, Slow Riot were the band to see. Certainly the loudest act on the Other Voices stage so far, the Limerick four piece provide an invigorating start. Tonight indie-rock veterans Interpol are due to play their debut album in full for its 15th anniversary. The thrill in seeing a similar post-punk group like Slow Riot, is knowing they have it all ahead of them. Early single 'Trophy Wife' is a standout here, played with a pummeling intensity and conviction. While slower songs like 'G.A.D' showcase the band's more melodic side when needed.

Katie Laffan is an instantly likeable figure, unable to contain a cheeky grin throughout her set. Her songs also have a down-to-earth, natural charm that's hard to resist. Witty lyrics and choppy guitar are punctuated by soulful sax and trumpet, creating an overall sound that has immediacy and bounce. After recent single 'Tastemaker', the crowd keeps calling for more, with Katie treating us to out first encore of the afternoon.

Big riffs and powerhouse vocals are the key components of Bitch Falcon's no-nonsense rock. Best experienced live, their performance today is relentless. Fan favourite 'TMJ' sounds especially epic with a strength and presence born out of years gigging across Ireland. A welcome reminder of rock music's swagger and power, it's the kind of set that makes us want to headbang till it hurts.

The precocious Jafaris has already had a busy weekend, performing last night with Soule, as well as with the RTE Concert Orchestra for 'The Story Of Hip Hop'. Fronting his own group, the Dubliner proves himself ready and able to own the Other Voices stage, instantly generating a party atmosphere. Jafaris is showmanship and groove personified. 'If You Love Me' and 'See Your Face' are standouts here, showcasing a dynamic flow and clever cadence, while closing track 'DE' sees Jafaris choreographing the crowd in commanding fashion.

By the time Stephen James Smith takes to the stage, the heavens have opened. Luckily the poet's warmth and dry humour are a perfect antidote to the rain. Starting the set with his hometown epic 'Dublin, You Are', Stephen is quick to generate a natural rapport with the crowd. Joined by an accomplished set of musicians, including Dingle man Cormac Begley, it's a unique performance from the imaginative bard. By the time Stephen is belting out 'Will Ye Go Lassie Go', the overall effect is that of a superb trad circle in the snug of an old pub - no mean feat given the mud and monsoon outside.

For the most part, the soft-spoken Tom Adams let's his music do the talking. Hunched over a piano, his nimble fingers dance lightly across the keys, slowly drawing us into his world. When he sings, it's the aural equivalent of a high-wire act. Captivating in it's precision and vulnerability, Tom's ethereal falsetto floats high above the Other Voices crowd. Tracks like 'Come On, Dreamer' and 'The Last Farewell' fall the right side of earnest, while new song 'Cold Noise' hints at a more direct and dry approach from the Berlin based crooner. Remember where you heard him first.

Jack O'Rourke is in good spirits taking the Other Voices stage. Drawing a big crowd, in need of warming up, the Cork-man appears to relish the opportunity. Along with two backing vocalists and a dexterous band, he leads through highlights from the debut album 'Dreamcatcher'. An unexpected cover of 'When Doves Cry' by Prince, starts to pick the pace up mid-set, while new track 'Lover' sounds like it could've been written for the next Bond film.

No strangers to the Other Voices stage, Rusangano Family turned in a true headliners appearance as our special guests tonight. Recent singles 'Tea In The Pot' and 'I Know You Know' generate some early singalongs from the crowd, but the energy really picks up when the trio draw upon material from their much-deserved Choice Prize album of the year 'Let The Dead Bury The Dead'. A sea of shirts are waved in the air as the album's title track blends effortlessly into 'Soul Food'. GodKnows and Murli fly through the air with gleeful abandon, while mynameisjohn never lets the energy drop between them. The group's interaction onstage and with their audience is something unmatched in Ireland, providing a high-energy end to day two at EP.