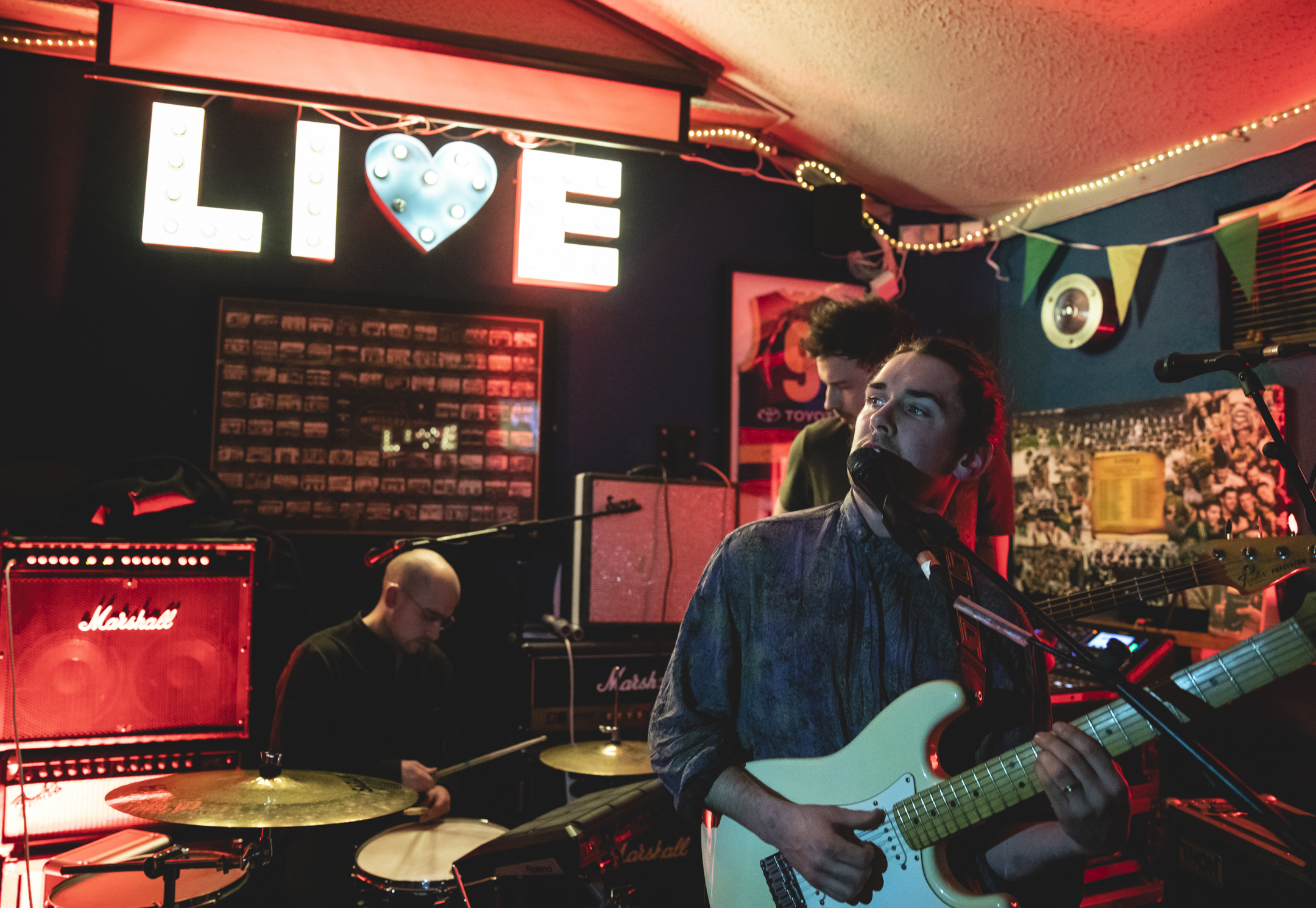 Here's what went down in Dingle..

Another band we had never heard of impresses - even after a few songs a natural instinct kicks in and tells you these are ones to keep a beady eye on. They have been around for a short while, peeking through the curtains via festivals such as Whelan’s Ones to Watch, We’ve Only Just Begun, and Knockanstockan, yet songs such as Sensually Speaking, Happiness Is A Fixed State, and Elephant In My Room speak volumes about the inherent progressive nature of the material. The latter song, in particular, aches, throbs and swaggers in a fusion of guitar riffs and distortion, leaving the impression of varying directions this band could take. Remember, now – a beady eye.

Wicklow’s Anna Mieke has been garnering lots of attention this year, and for good reason. Her debut album, Idle Mind, has been on the receiving end of great reviews, with The Irish Times describing it as “a strikingly confident collection of songs full of blue sky thinking and wide open horizons”, and The Thin Air music blog marking the singer and songwriter out as “one of the most promising artists on the Irish independent sphere – a mature musician and songwriter whose work deserves to be heard far and wide.” Such praise is well deserved, for Mieke’s songs fuse tradition with contemporary in a way that arrives from the same source. It would be a hard heart, indeed, that wouldn’t crack from the hearing of them.

From Derry, Porphyry (named after a Greek philosopher who wrote widely on music theory) is the umbrella name for multi-instrumentalist Daryl Martin who, with his range of unfeasibly tuneful keyboards, show instant signs of resilience by playing in a tiny room where there are gathered less than 20 people, and which includes a kitchen stove and just enough space in a corner for equipment to be set up. While this was possibly the least well attended gig over the weekend (one of the very best aspects of the Dingle Gin Music Trail is that it provides access to and coverage of bands you might never have heard of before), it was also, quite likely, the most illuminating in that it showcased a really individual musician delivering their work amidst varying displays of brow-knitting bemusement and genuine interest. The music, though, was intriguing - swoosh-like electronic music and vocals that brings to mind a mix of singer-songwriter, beats and drone merchants, and ‘70s electronic music acts such as Tangerine Dream, E.L.P., and other quasi-classically inclined groups of the same era. It’s a tough call to snag the attention of a room that might prefer something less esoteric, but Daryl Martin quickly silences any upswing in chat with a short set that is surprisingly effective. Only towards the end does he misjudge, but even with this (a track that meanders into the ether) you have to hand it to the guy – he has nerves of steel.

When Kilkenny teenage band The Wha played the Crosby Stage earlier this year at Electric Picnic, they looked like rabbits caught in the headlights, unsure of what to do or what to say. The past few months has clearly seen them grow up in public, and so they take to the floor of Paul Geaney’s Bar much more sure-footed. The band’s influences are rooted as much in the classic era of punk/pop (The Jam, Squeeze, very early Elvis Costello) as in the latter-day output of the likes of The Strokes and The Vaccines, so what we have is a class-clash mix of pioneers and settlers. No wheels are being reinvented here, but if your thing is tight-trousered, tautly delivered punchy pop, then you know who your go-to band is, don’t you?

It is always good (actually, it’s downright brilliant) to see a music act that hits the nail so square on the head that it takes just one blow of the hammer to send it home. This is what happened on Saturday night in a billowing tent on a very cold night in Dingle, Co Kerry, as part of Other Voices Dingle Gin Music Trail. Tebi Rex have been making it work for the past while with their mix of R&B, hip-hop and quieter pop moments, but to see them on stage flicking the finger to the forms and making them their own is a wonder to behold. The contrasts and dynamics, however, between the two main factors here – rapper Max Zanga and his counterpart Matt O’Baoill – are what drives the momentum and builds the energy levels. Highlights are many and would be unfair to select; the most important thing to say, perhaps, is that the provision of high end excitement aligned with the importance of inclusion is at the heart of their music. But, yes, Tebi Rex royally ripped up the tent in what was surely the best Music Trail gig of the weekend.

An Diseart is a fitting venue for the debut Dingle Gin Music Trail show by Paddy Mulcahy, a generally under-the-radar electronic musician who has recently released his debut album, How To Disappear. The previous night, Mulcahy tells from the altar, he had played a dance/beats gig at the Marina Inn. Today, however, in accordance with the beautiful nature of the venue and the fragile state of people’s heads, the music is more ambient and (yes, why ever not?) mindful. In fact, between the stained glass windows, the concentration of the audience, and the music - which twists and turns, ebbs and flows in ways that connect the head and the heart - the gig is more art installation than anything else. This is not, of course, to take away from the sheer skill of Mulcahy, but rather to point out the manner in which his work effortlessly fills the space. You can use whatever words you want to describe the gig: iridescent, immersive, elegiac, and so on. Ultimately, it’s one musician making some of the most blissful music you’ll hear this or any other week of your life.

A very cold mid-afternoon slot for Laoise might have seemed like a good idea at the planning meeting. Fact is, it’s a great idea. Keeping her full band set for a later show (at Nelliefred’s), this is instead a stripped down affair, with the songwriter and singer accompanied only by a keyboard player, a guitar, a heavy winter coat, and several songs that are as naked as the day they were born. The singer’s chirpiness is balanced by her songs, which have serious undertows of loss and emotional distress. “I cry a lot, so I write a lot, and this song is about an arsehole...” she prefaces one song that really gets to the broken, reflective heart of the matter. With no band or other instruments to cover anything - be they cracks or gaps or some other song construction mistakes - Laoise is obviously fully prepared to lay it on the line without recourse to the usual safety nets. This is a good thing, the mark of an artist who is fully prepared to be vulnerable for no other reason than that it’s just the way it should be. Later in Nelliefred’s, Laoise will vibe these songs up to the max, but here they shine differently - not necessarily brighter, but certainly more emotionally depth-charged.

In what must be one of the smoothest transitions from established band (Little Green Cars, but you know that, don’t you?) to new entity, Soda Blonde have cleverly severed connections with their past whilst retaining elements of what made their previous incarnation so good. Admittedly, with all members (bar one) intact there was no reason to believe that anything intrinsic to the musicians’ creative make-up would have changed - they’re the same people, after all. What has altered is song craft and associated music, which takes a detour from former shades of folksiness into an area that appears to be informed by more cosmopolitan and adult influences. The entry point, of course, remains Faye O’Rourke’s voice, which has such inner strength throughout it often seems invulnerable. This access, needless to say, makes way for musicians that are in as good a zone as they have always been in. From green to blonde? Yes, colours may have changed, but innate virtues haven’t.

Wearing a boiler suit - no matter what colour or style, but white and with zips, seeing as you’re asking - implies there is much work to be undertaken. So it proves with Jackie Beverly, a Dublin singer and songwriter that filters out tune after tune in a range of styles, all of which suit her. Her voice - quite a pure instrument - is the unifying factor, but the music’s shadings and hints that run through the songs underpin everything with the surest of touches. Backed by a drummer and guitarist, occasionally playing guitar herself - and with some input from a friendly, unobtrusive laptop, which enhances the music with traces of indietronica - Beverly signs off her brief set with a song called Sweet Goodbye. Characteristically smart and full of spirit, the song clearly reflects its writer. Onwards to next year, then.

For a band as musically adroit as Gypsies On The Autobahn there is a high level of force to them - subtle they may be but fragile they are not. This year, the band’s second album, Suspended, was released and it showcased a group that takes significant risks with form without sacrificing the core elements of what makes their resonant alt.rock songs work. What was probably missing from this gig, however, were that the highly reflective lyrics (and the sentiments behind them) were often lost in the delivery. At quieter times, this would be a problem, but in the pushes, shoves and excuse-mes of the venue it doesn’t really matter. Why? Because the band have the suss and smarts to construct tough songs that are stitched together with tension and vulnerability, songs that always reach beyond the words. May the autobahn rise with them. Or something like that.