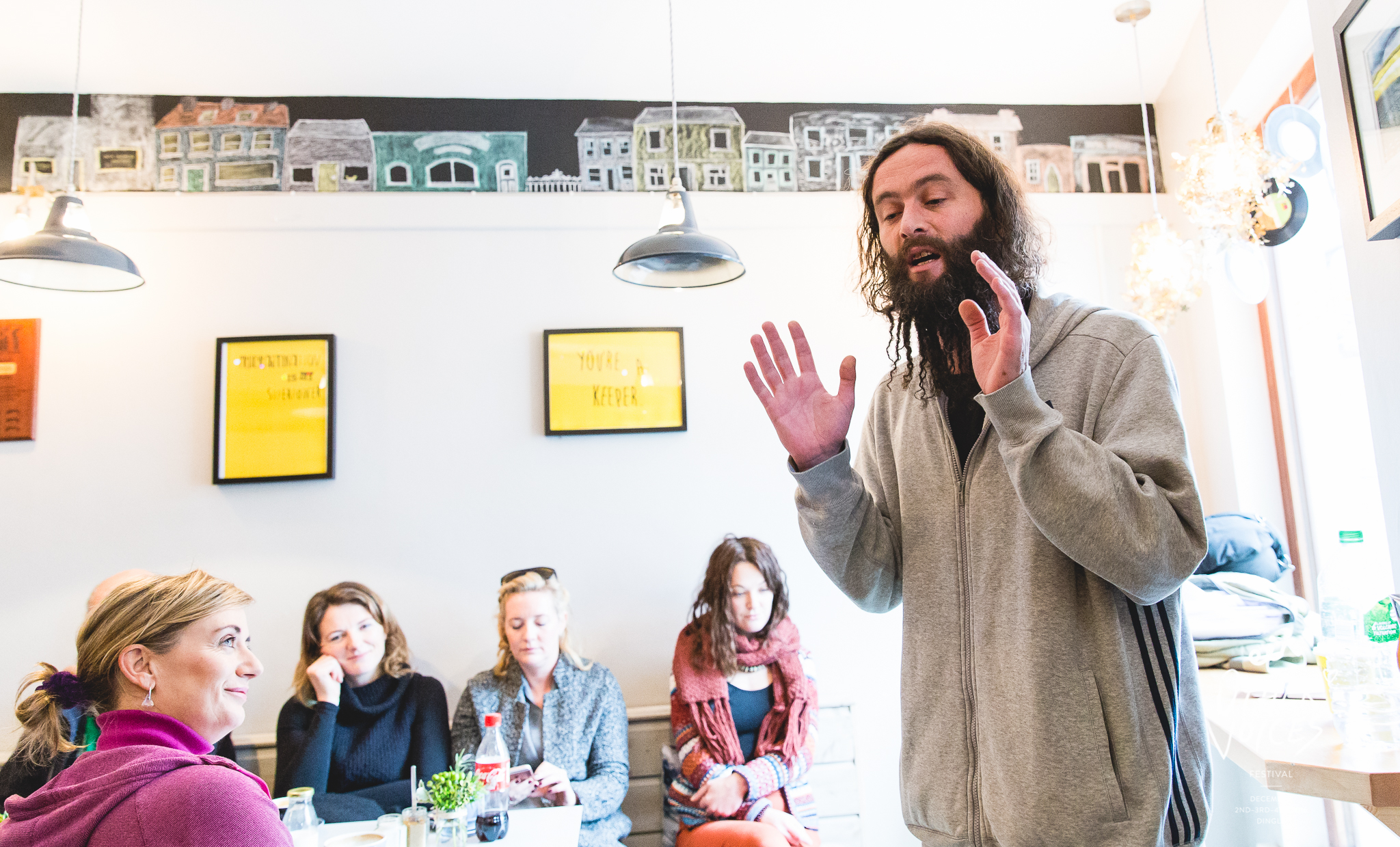 Day 2: The Music Trail in association with Heineken

Coffee bars and poetry have gone hand in hand for more years than Mr Brennan can remember, but we think it's the first time we have seen a naturally eloquent wordsmith battle victoriously against the whir and grind of coffee machines in continuous use - as well as quelling chatter and muting cups clanking on saucers. Fact: John Cummins is a one-off, and in a fair world would be studied in school exam curricula as a perfect example of how to engage and enlighten an audience with words, words and more words. Within time, we reckon.

There is no room at the coffee house, let alone the inn. Indeed, space is so tight that songwriter Rosa Nutty has tied her hair up in a bun, yet it still looks as if she is too restricted in the corner window. After a tentative, nervous start, Rosa has the caffeinated crowd on her side. It's a baptism of fire in many ways: she is up so close and personal here that it could detrimentally effect even the most assured performer. Her fragile songs and poised delivery, however, make this brief gig a special, gentle treat.

Another Music Trail Surprise Gig, and another doozie. Irish musicians Caoimhin O Raghallaigh and Cormac Begley may look like trendy bank officials, but their traditional music is invested with a ‘why-the-feck-not’ attitude of young lads out to paint the town all shades of red. That they are able to negotiate these two paths at the same time without falling into a ditch is brilliant. Trad music for people who think they don't like trad music? It has been done before, of course, but O Raghallaigh and Begley are doing it again with such ingenuity that it’s almost like starting over once more.

Another Music Trail act, and another heretofore hidden gem makes itself known. County Armagh’s Naomi Hamilton’s set progresses from whimsical folk-pop to genuinely atmospheric indie post-punk of real substance. The several songs performed here are of the authoritative kind usually delivered by people with much more songwriting and studio experience, but Hamilton eases out of the shadows and rises to the occasion time and time again.

Describing himself as "an experimental electronic artist", Ryan Vail sits at his keyboard and proceeds to cover the walls of this special venue with washes of supremely melodic and often solemn music. Occasionally accompanied by a flautist, and owning a voice that sounds like Jarvis Cocker if he had been born and raised in Düsseldorf instead of Sheffield, the songs performed here are rooted in Krautrock yet tempered with pop music. One song is like Chicory Tip crossed with Orchestral Manoeuvres In The Dark; another is like Leonard Cohen soundtracked by Trent Reznor: and another is a live improvisation that ticks every box in the beauty stakes. It all adds up to a very different, beguiling and remarkable stretch of music that makes you want to do the decent thing and find out more about this superb musician and composer.