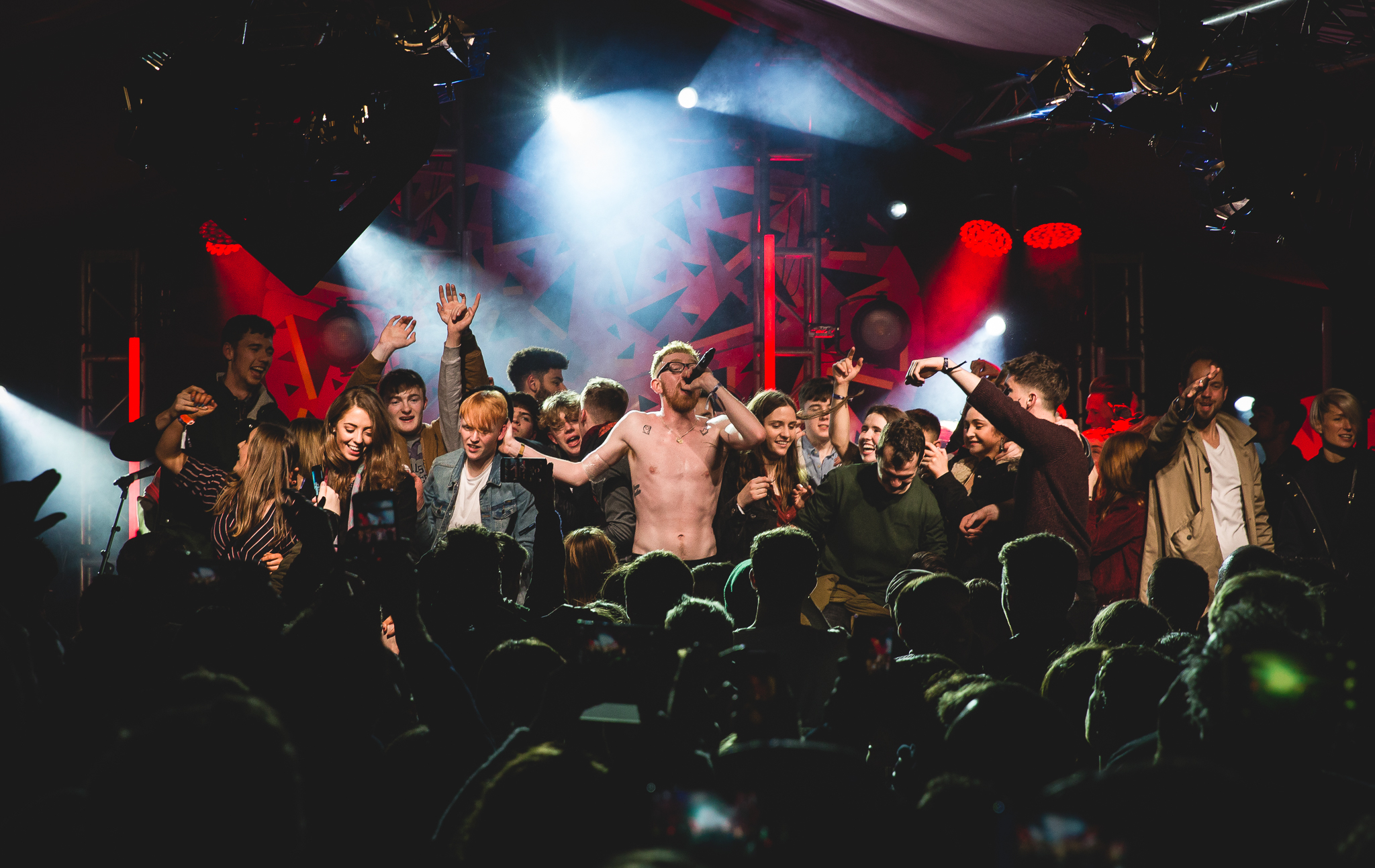 A stuffed An Chonair Bar, and Kojaque kicked off the Music Trail in fine fashion with Last Pint, a track from his album, Deli Daydreams. Despite the hook line of “fuck me like you hate me”, this is a crowd friendly tune that brings everyone into a gig that, from start to finish, throbs like a delicious ache through the body, from toe to head. Most of the tunes are taken from Deli Daydreams, a brief collection of songs that detail the working week in the life of a deli drone. “Welcome, welcome, welcome” says Kojaque (aka Kevin Smith) as he introduces his musician compadres, but while the saxophone and backing of tinkling piano add interesting textures it is the words that take it to another level. There is solid sense here, and if the musical tropes are, perhaps, all too familiar there is the saving grace of what the songs are about. He sings in Love And Braggadocio that “life is ignorance, I’m only spreadin’ awareness” - this is genuine urban art, from the subject matter to the music accompanying it. “If the cheque don’t bounce, the music will,” says Smith. Ain’t that the truth.

Orchid Collective have been tipping away for a few years now and it hasn’t been for lack of talent and skill that they have yet to break through to an upper level that is deservedly theirs. Whatever the problem is, it certainly isn’t the fault of the music, which is a really smart mixture of trippy guitar, tight harmonies, quick time signatures (with direct antecedents in varying strains of prog rock), a sure footed sense of folk music, and an instinctive approach to gathering all of these disparities together to make what is a compelling whole. In other words, whatever they’re doing they’re doing it right. This was made clear by the audience reaction, which altered at the start of the gig from mildly interested to – at the mid point onwards – fully engaged. It’s important to note, too, that the venue is at an extreme end of the Music Trail’s boundaries, so people are here because they want to be, rather than both band and venue being a handy spot to pop into in the centre of town. Such investigation was clearly worth the time and effort for all who ventured here.

Walking from the Marina Inn to Chonair Bar, you could hear Mango & Mathman’s music rebound off the walls and the lanes, and when you walked into the venue, you could sense that the gig was going to go according to some lunatic plan. Already, Mango (aka Karl Mangan) has his top off, the skin glistening under the lights, a section of his right arm shrink-wrapped around a new tattoo. As Sherlock Holmes would say to his trusted companion, Dr Watson: the game is afoot!

Last year on the Other Voices Music Trail, Mango & Mathman played the much smaller venue Nellie Fred’s. About two months ago, they played Other Voices Ballina, and here they are again, treating the OV crowd to a further dose of hip hop without a condom: skin to skin pleasure, with the added risk of something bold if not beautiful about to erupt.

“I’m not able for this...” says Karl, as he leaves the stage into the crowd, leaving Mathman (Adam Fogarty) to tend to the equipment. “Run the riddim!! Run the riddim,” shouts Karl back at Adam, as he gets lost in the crowd. And then…

What happened next is that it all goes deliriously apeshit as Karl returns to the stage with a heaving throng of bodies in what looks to be an attempt to break the Guinness Book of Records for how many people you can get on one stage in the space of five minutes before the lights go up. The gig ends with a “respect the ladies” tune. Respect, too, to Mango & Mathman for putting on the ritz, shredding Dingle to bits, and pulling out a cracker a good three weeks before Christmas Day.