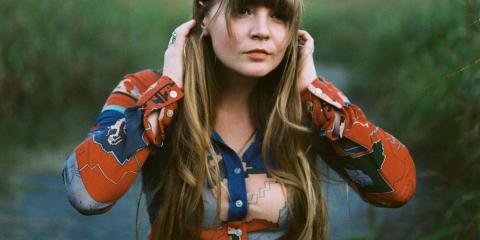 "Writing and performing as the person that’s closest to your internal self is a sure way of being the most effective as an artist".

It's hard to argue with the logic of Courtney Marie Andrews. A singer-songwriter of exceptional depth, hers is a voice that floors you upon first listen. With soaring vocals, infectious americana grooves, and deeply personal lyrics, it's an undeniably honest formula that's working very well for the 28 year old from Phoenix, Arizona. Latest album 'May Your Kindness Remain' has received a much-deserved five star review from The Guardian, as well as being listed among Rolling Stone's Best Country Albums Of The Year. Ahead of joining us in Dingle this December, we spoke with Courtney about songwriting, social commentary, and the songs that inspire her.

Hi Courtney, you've been touring a lot since releasing May Your Kindness Remain - have the songs evolved since you initially recorded them?

Yes, I’ve found that my songs inevitably evolve from when I first record them. I leave certain parts open for interpretation within my live band, which always leads to changes. I also hardly ever re-visit songs I’ve recorded, so they tend to grow and morph over time.

According to your press release, the album deals with "the unrealistic picture of success that is so embedded in modern American culture". That's something we can hear on the title track and Two Cold Nights In Buffalo in particular. Why did you find yourself focusing on that idea for this album?

I wanted to create a tension between what we expect as a society and what the reality of everything is both economically and socially for our country. There is so much pressure for Americans to buy more, be more, and work harder, but rarely are we told to look inside ourselves, our families, and our homes for fulfillment. I often think that leads to so much depression within our culture. This album was my attempt at looking in.

How has time living abroad and touring affected your perspective on home?

When you travel as much as I do, you start to notice things Americans do that you’ve never noticed before. I’ve gained immense perspective on what America is great at, but also what needs a lot of improvement.

Border is another standout song for its political stance. Do songs with social commentary require a different approach than more personal songs? Is there pitfalls to avoid when writing a 'political' song?

I believe the best political songs are written from a narrator's perspective. I find that you if you start name-dropping dates and historical specifics, you lose the emotional aspect of the political story. In other words, I write political songs very personally.

Tell us about the latest song you've been working on, and what's inspired it?

I have so many songs circling in my head right now! I’ve been writing as a means to process emotionally lately. A lot of the new songs I’m working on are very gut-wrenchingly honest and personal.

You've been releasing music for a decade now, going back to age 18. How did you find your voice as a singer and songwriter?

It took many, many years of playing around and recording to find my voice. I think you find it by constantly trying to one-up yourself. If I didn’t like how I performed or recorded something, I’d try and make something even better the next time. I also find that lying in songs is very obvious. People can sniff that out. Writing and performing as the person that’s closest to your internal self is a sure way of being the most effective as an artist.

In the past you've been part of Jimmy Eat World, as well as backing Damien Jurado and Milow - what did you learn from playing in other songwriters backing bands?

I’ve learned so much. I often look at those times as if they were my college years. I learned how to be respectful in a group, how to work hard, and how to perform with confidence on stage.

We've heard you're a big fan of cult 70s band Little Feat - what do you love about band, why should people listen to them?

What a band. Where to begin? Their groove and feel are out of this world. They’re incredible players. Their songs are beautifully written. They’re just the ultimate feel-good band. They nail that sloppy but together sound, which I’m so deeply in love with! Lowell George is also one of the best musicians to have ever graced planet earth!

Can you recommend three records people should listen to this week and what makes them so special?