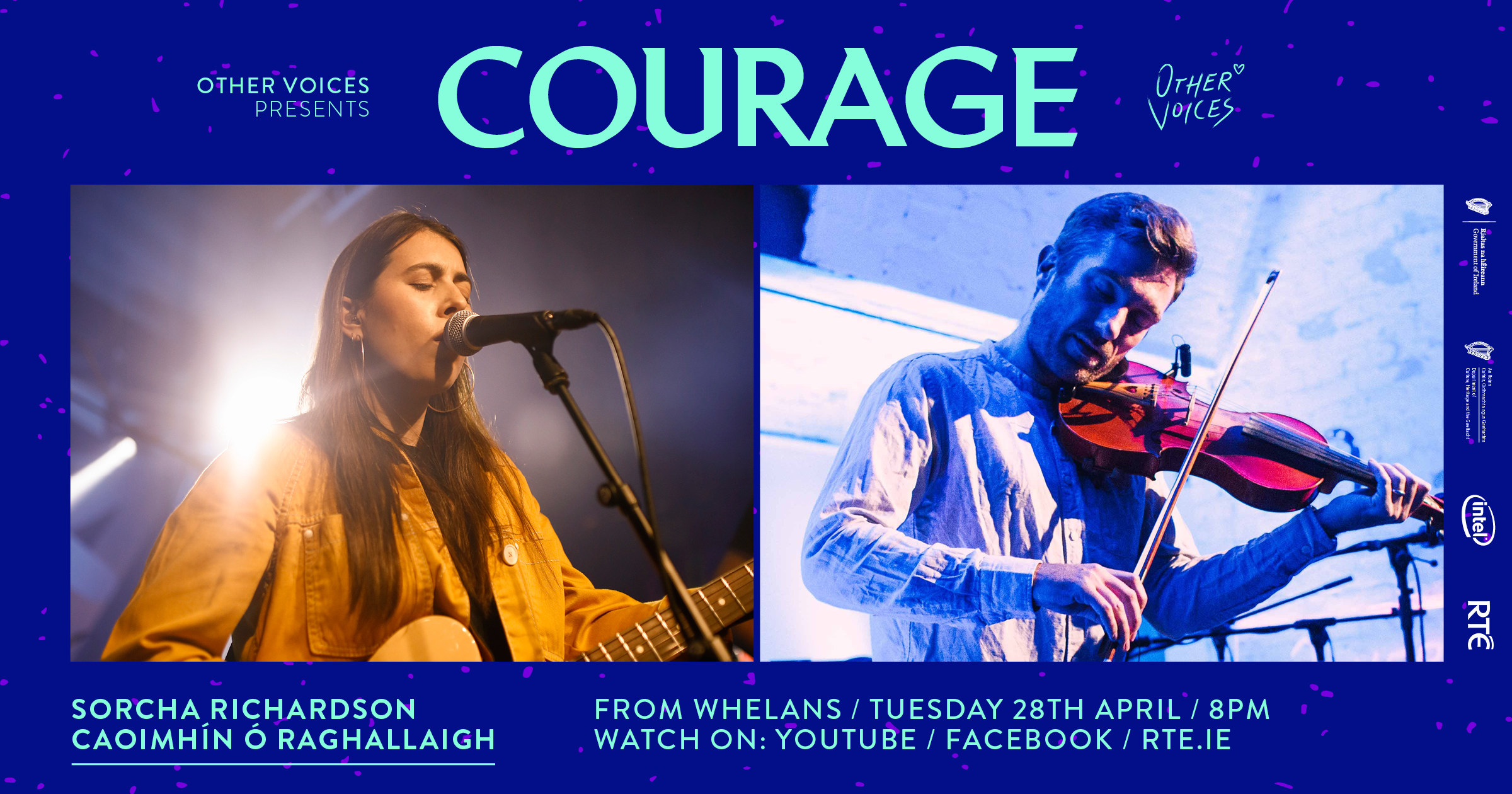 Other Voices presents Courage live from Whelans at 8PM GMT

Following on from the fantastic global response to the first ‘Courage’ live stream with Ye Vagabonds, we will continue this Tuesday evening with Sorcha Richarson and Caoimhín Ó Raghallaigh.

Irish singer-songwriter Sorcha Richardson has been cultivating a cult fanbase for several years. Songs such as ‘Ruin Your Night’, ‘Petrol Station’ and ‘Can’t We Pretend’ are evocative vignettes of a moment in time which find the poetry in introspection, with a tangible nod to key influences such as Sharon Van Etten, Arcade Fire, Phoebe Bridgers and Julia Jacklin. Exuding passion and tender beauty in equal measure, her narrative song-writing connects with people who have shared similar tangled emotions - as evidenced by 30 million streams at Spotify alone. In November of last year, Richardson released the biggest artistic statement of her career with her debut album, First Prize Bravery, winning praise from The Irish Times, DIY Magazine and Nylon, and later being nominated for the RTE Choice Music Awards for Irish album of the year. It’s a collection of lyrical snapshots of life as a twentysomething, accompanied by the desires, doubts and developments that the decade delivers.

Caoimhín Ó Raghallaigh makes music on a 10-string fIddle called the hardanger d'amore. He has performed on some of the most beautiful stages in the world, including the Sydney Opera House, the Royal Albert Hall and the Carnegie Hall. He has made eighteen recordings to date, ranging from quite traditional to fairly out there, and continues to explore the region where traditional music begins to disintegrate. Caoimhín performs as a solo artist, yet is also widely known through his collaborative work, including groups The Gloaming and This is How we Fly, and duos with Dan Trueman, Thomas Bartlett, Garth Knox, Mick O’Brien and Brendan Begley. He has also performed with artists such as Laurie Anderson, Vincent Moon and Amiina. He has made music for theatre and film, including music for the Oscar-nominated movie Brooklyn and Volker Schlondorff's Return to Montauk.

For the duration of the series artists will be asking the viewer to donate what they can to a charity of their choice.

Safety is our top priority. In order to comply with the protection of public health, our project has been designed to minimise travel, contact and proximity for performers and crew. We are using the same protocols as film and television crews who continue to work and provide essential public service during this pandemic. This means using rigorous procedures and processes that comply fully with the Irish Government's regulations and restrictions.

Courage has been curated by the team who produce Other Voices and is funded by the Department of Culture, Heritage and the Gaeltacht and by Intel. We are grateful to the artists and crews who have agreed to participate in the project at this critical time for Ireland.

The new performances will be filmed in strictly controlled locations which includes Whelan's and more to be announced soon.

THERE IS NO LIVE AUDIENCE.

Other Voices is delighted to present ‘Courage’, a new project that delivers uplifting, inspiring performances from brilliant artists to the public during the COVID-19 crisis. Courage will beam these performances directly into homes across the nation, from a number of iconic cultural locations. Our goal is to provide essential cultural output during this period. Music collapses distance in this time of isolation, it gives us courage, consolation and brings us together. Performances will take place on Tuesday and Thursday nights and will be made available worldwide, free of charge, thanks to the support of the Department of Culture, Heritage and the Gaeltacht, Intel and RTÉ. Courage will also be shown on RTÉ 2 from the 7th of May every Thursday at 23:30.

Speaking today, Minister Madigan said: “We know culture plays a hugely positive role in our collective wellbeing. The performances that will take place during the Courage programme are sure to raise plenty of spirits and can be enjoyed as people stay at home. It is in addition to the supports that the Government is already providing to artists and those working in the arts and cultural sectors.”

Tune in on Thursday at 8PM via Other Voices’ YouTube + Facebook Live and RTÉ.ie to watch the show. Music for the head and the heart.