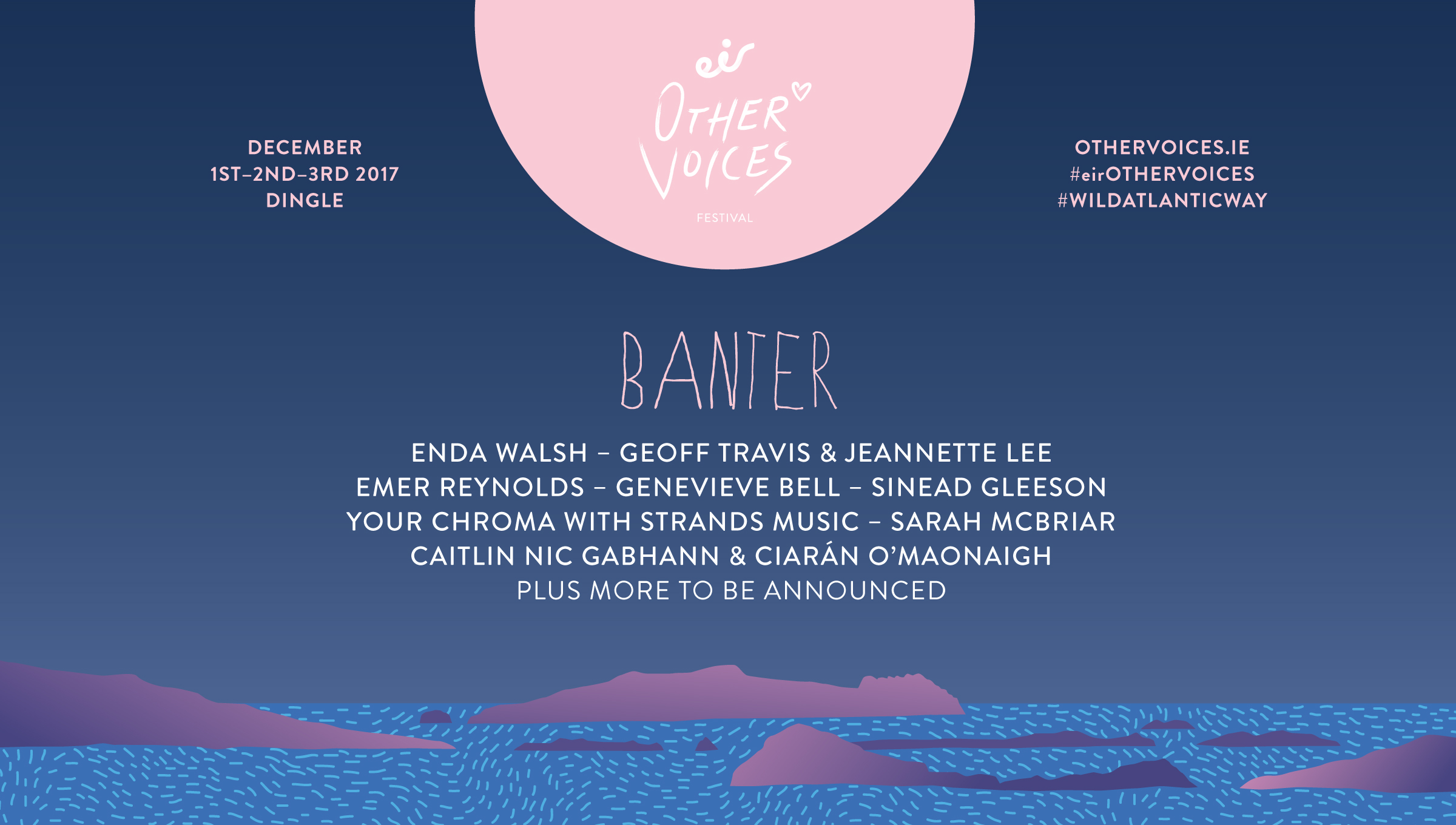 Banter at eir Other Voices 2017

Banter is an umissable staple of eir Other Voices in Dingle. Bringing together creative minds from disparate disciplines, it's an engaging and thought-provoking platform for afternoon chat and heady debate. This year's Banter line-up has just been announced, and yet again it doesn't dissapoint. Music Industry legends, futurist researchers, award-winning documentarians, and mercurial playwrights will be in conversation with Jim in the cosy surrounds of Foxy John's this December, alongside some exceptional musicians and special guests as usual.

Emer Reynolds
Director Emer Reynolds is an Emmy nominated multi-award winning documentary director and feature film editor, based in Dublin, Ireland. Over the last two decades, Emer's work has spanned feature films, TV Drama and documentary including editing one of the most successful Irish feature films of all time 'I Went Down'. Emer studied Physics & Maths at Trinity College Dublin and has a lifelong passion for space exploration.

Enda Walsh
Enda Walsh is a multi-award-winning Irish playwright. He lives in London. His work has been translated into over twenty languages and has been performed internationally since 1998. He won Tony Award in 2012 for writing the book for the musical Once, which went on to play on Broadway, in the West End and a US tour. His film work includes Disco Pigs (Temple Films/Renaissance) and Hunger (Blast/FILM4).

Genevieve Bell
Genevieve Bell is a Professor and Director of the 3A Institute at the Australian National University, where she also holds a research appointment at Data61. Prof Bell has pioneered futurist research looking at how different cultures use technology, and helped guide Intel’s product development by developing the company’s social science and design research capabilities.

Geoff Travis & Jeanette Lee
Geoff Travis opened the Rough Trade record shop in Ladbroke Grove, west London, in 1976 and established the independent label of the same name three years later. The label's distribution arm went bankrupt in 1991 and the label folded, only to be relaunched in 1999. Its acts have included The Smiths, The Fall, the Strokes and Arcade Fire. Jeannette Lee worked in the punk boutique Acme Attractions in the 1970s. She was a member and manager of punk band Public Image Ltd before joining Rough Trade, and has managed artists including Jarvis Cocker.

Sarah McBriar
Sarah McBriar is the founder and creative producer behind Belfast festival and conference AVA. Over the past three years AVA has evolved from a fledgling concept into a global brand, now running events across mainland Ireland, Amsterdam, and Mumbai. The predominantly techno-focused festival is one of few to foster collaborations between musicians and digital visual artists, and its massive conference programme provides the vast amount of emerging talent in attendance with an abundance of educational content and networking opportunities.

Sinead Gleeson
Sinéad Gleeson is a writer, editor, freelance broadcaster and journalist. Her short story ‘Counting Bridges’ was longlisted for the 2016 Bord Gáis Energy Irish Book Awards and a 500-word flash fiction story ‘Fathoms’ was highly commended at Dromineer Literary Festival in October 2015. Currently, she presents The Book Show on RTE Radio One.

Caitlin Smith & Ciarán Ó’ Maonaigh
Acclaimed musicians each in their own right, Caitlín Nic Gabhann and Ciarán Ó Maonaigh have joined forces to create one of traditional music’s most impressive acts. The pair’s spirited music and dance is rooted in the tradition; brimming with soul and life. Through fiddle, concertina and dance, Caitlín and Ciarán breathe fire into musical pieces, combining their arts with chemistry and energy.