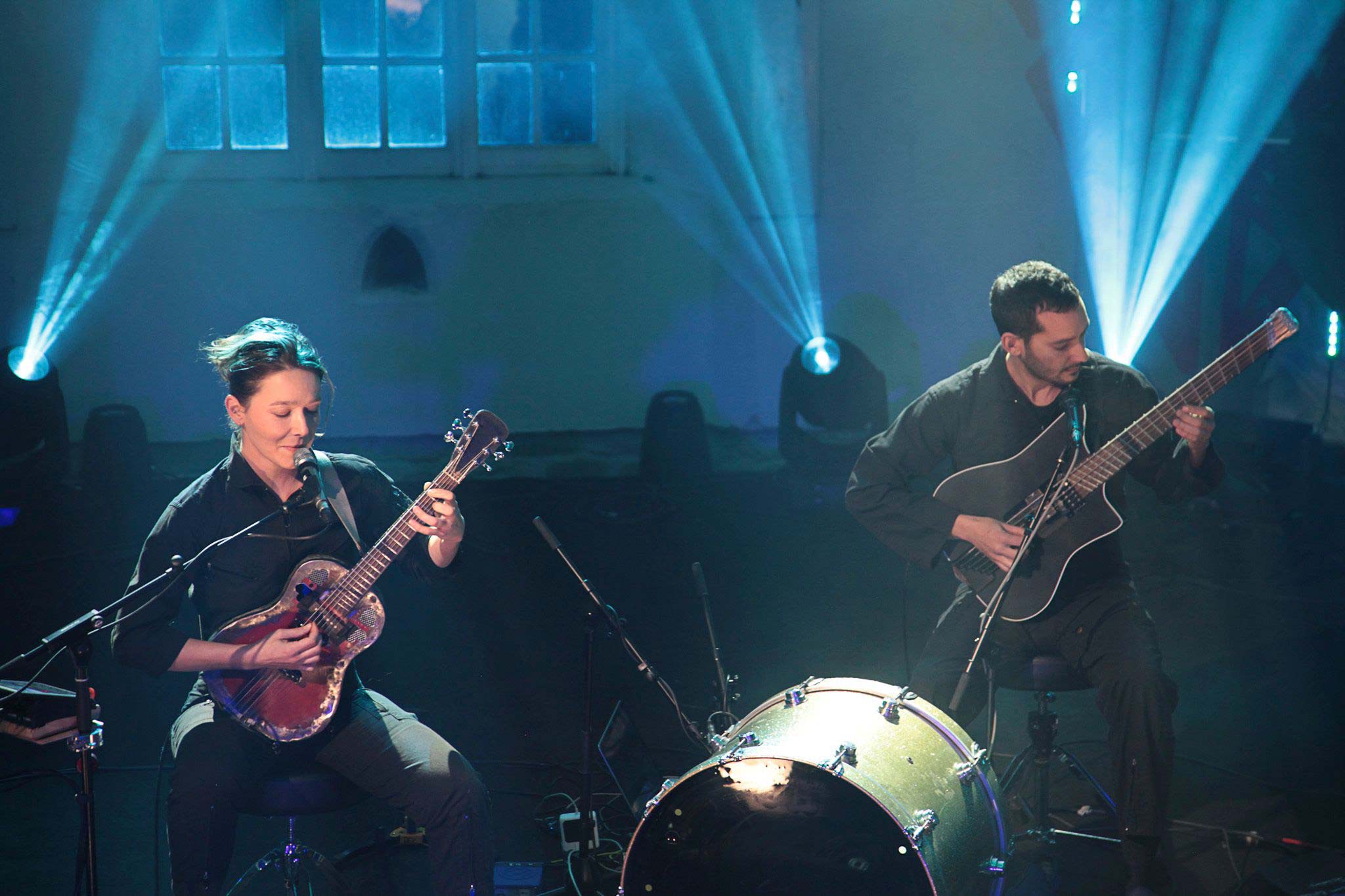 Based in the upstate New York town of Hudson, BUKE (byook) & GASE (gace) are Arone Dyer on the "buke" (a self-modified six-string former baritone ukulele) and Aron Sanchez on the "gase" (a guitar-bass hybrid of his own creation). Both of them play double duty, also mobilizing a small army of foot percussion. These instruments are then filtered through various pedals, amplifiers and homemade inventions to create a surprisingly complex sound. Dyer's supermelodic vocal lines weave through the beautiful yet unwieldy musical matter, balancing light and dark, calamity and control. Their musical multi-tasking makes for live shows that are visually unexpected and sonically explosive.In 2009, Brassland co-founders Aaron & Bryce Dessner of The National (well, technically, their sister) discovered BUKE & GASE when they played a small basement venue down the street from The National's home studio in Ditmas Park, Brooklyn. They were blown away by how much noise and rhythm was emerging from this two-piece band.Dyer and Sanchez had formerly been bandmates in the post-punk noise group Hominid who, after touring with The Fall in 2004, fell to their demise and disbanded. Sanchez went on to form Proton Proton (which opened for Deerhoof and Les Savy Fav) and Dyer took a three-year musical hiatus and became obsessed with racing her bicycle as a form of masochistic entertainment.In 2007, pining for a new direction, the two regrouped. After much alchemizing they discovered their nascent sound while tinkering with their distinctive homemade gear: a bass drum with an integral snare drum and tambourine, ankle-played bells, toe-bourine, a cameo-ing homemade bulbul tarang and, of course, the eponymous buke and gass. For the geekly inclined: the buke and the gass both have multiple audio outputs that either go to their respective amps or are managed by various audio mixers, distortion boxes, and pitch shifters. (NOTE: no loop pedals are used, every sound is made live.)Officially forming in 2008, BUKE & GASS self-released their debut EP +/- in late 2009. Albums came out on Brassland in 2010 (Riposte) and 2013 (General Dome). Since then they've received a stready stream of attention and performed gigs around the world. They've criss-crossed North American, the UK and Europe -- but also made it as far as Japan, Singapore, Australia and the Philippines. The internationally acclaimed podcast Radiolab devoted two episodes to their music, Pitchfork named their song "Hiccup" a Best New Track, NPR has webcast two of their performances (Tiny Desk Concerts, as well as a special CMJ feature concert), New York scene rag The Deli Magazine named the group "local band of the month" and put them on their cover, and Stereogum covered them in a Quit Your Day Job piece about their interesting careers