Owen Pallett is a Canadian composer, violinist, keyboardist, and vocalist. He has written string and orchestral arrangements for numerous releases, including the Arcade Fire?s Neon Bible, Grizzly Bear?s Yellow House, Beirut?s The Flying Club Cup and The Last Shadow Puppets? The Age of the Understatement.

Most recently he wrote orchestral parts for Pet Shop Boys? Yes, played violin on Mika?s The Boy Who Knew Too Much and contributed string arrangements to the Mountain Goats album, The Life of the World to Come. Heartland, is his third album and is a panoramic and orchestral work; a song cycle of Contemporary Fiction, and regarded as Owen?s finest work to date. Heartland?s narrative concerns a young, ultra-violent farmer named Lewis and is set in the imaginary landscape of Spectrum. The composition of the record is diverse, oscillating between 19th century military music, 70s analog synth-pop, Russian futurism and American pointillism, often in the space of a few bars. The result is a multi-layered orchestral work played with the immediacy of a singer-songwriter or electro bedroom auteur. This process echoes the live shows where Pallett layers parts over and over one another to produce a dense set of orchestral flourishes, something approaching a one man orchestra playing the Rite of Spring with a wholly pop heart. Running in counterpoint to this composition method is Pallet?s incredible sense of melody and his resonant voice. His singing on Heartland infuses the songs with empathy and drama, weaving itself among the strings and percussion, soaring at times on Lewis Takes Off his Shirt and Tryst With Mephistopholes through the drama of the narrative. 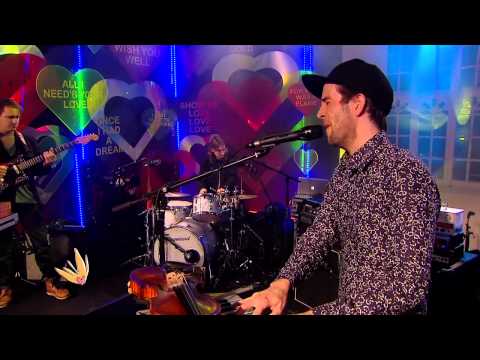